NOTE: Full spoilers for this crossover episode between Arrow and The Flash are present in this review.

After yesterday’s entertaining, but slightly rushed crossover episode on The Flash, Arrow concluded the two-day crossover event with “The Brave and the Bold”, an outstanding episode that is Arrow’s best of Season Three since its premiere. Any shortcomings from the previous crossover episode on The Flash, “Flash vs. Arrow”, are firmly in the rear view now, as we get an episode that is more dramatic, more exciting and generally better-paced to boot.

After Team Arrow’s side tour to Central City, Cisco and Caitlin conveniently take vacation days from S.T.A.R. Labs (later revealing that Wells didn’t actually approve it) to travel to Starling City, and meet up with Felicity in the Palmer Technologies building. Felicity leads the two back to the Arrow Cave (even if Felicity never calls it that, ever, according to her), where Oliver is quickly not amused. 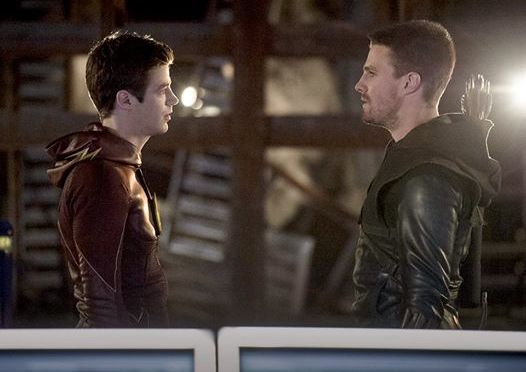 There’s not much time to fume though, as the boomerang killer strikes again, after Oliver and Roy discover a link to A.R.G.U.S. in the episode’s opening moments. Turns out, the boomerang wielder is none other than Digger Harkness, DC’s Captain Boomerang himself, and normally an enemy of The Flash in DC Comics lore. Digger Harkness is also awesome, easily being the most badass and flat-out cool villain that Arrow has had all season so far. Not bad for one of the more infamously silly villains in DC history.

Barry Allen inevitably finds his way to the scene of Boomerang’s A.R.G.U.S. building massacre, narrowly saving Oliver’s life, and allowing Diggle to save Lyla. Turns out, Lyla gave a kill order to the entirety of the then-active Suicide Squad, though Boomerang’s collar bomb obviously malfunctioned, leaving him hell-bent on revenge against A.R.G.U.S. With Barry inviting himself along on another team-up, Oliver enlists the help of the Scarlet Speedster to stop Captain Boomerang once and for all.

The drama of Lyla being targeted was flawlessly executed, particularly when Boomerang ends up tricking the heroes with a bread crumb trail that leads them out of the Arrow Cave. The result sees Lyla critically wounded, with the show actually doing a great job of making viewers believe that Lyla is going to die. Thankfully, Barry rushes her to the hospital in time, leaving to her getting saved in the end. Diggle even takes the incident to heart, and proposes to Lyla when she wakes up, making for a very sweet and surprising moment.

Sure, it’s easy to wonder exactly who is caring for their infant daughter at this point, particularly with A.R.G.U.S. compromised, but I suppose that’s a nitpick.

The final confrontation with Boomerang was also awesome. Boomerang places five bombs around the city, leaving The Arrow to battle him as The Flash tries to stop all of the explosions in time. Barry’s solution is certainly creative when he realizes that all five bombs are linked, and he can’t be in five places at once, rushing Roy, Felicity, Cisco and Caitlin to the sites of the other bombs so they could all cut the wires at the same time. As much as Barry might initially seem like a dick for directly putting all of his friends in harm’s way without their consent, at least the day was saved, with Oliver managing to subdue Boomerang as well, transporting him off-screen to Lian Yu to be Slade Wilson’s cellmate. One has to assume that this is going to bite the heroes in the ass later, but that time will no doubt come much later. 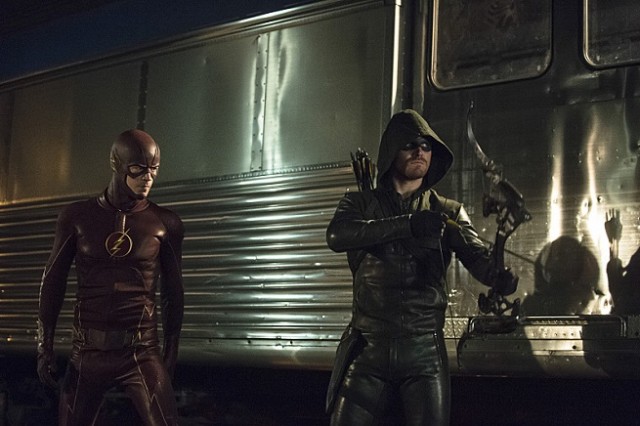 As great as the action, humour and character moments all were though, it was the episode’s themes that really elevated the second half of the DC Television Universe crossover event. The episode explored the other side of the coin between The Arrow and The Flash, with Barry and co. not socializing with anyone, unlike Team Arrow’s meet-and-greets in the brighter, more chipper Central City, and with Oliver even reminding Barry that Starling City is a darker, far less friendly place than Central City. Cisco and Caitlin admit after seeing Team Arrow in action that they’ve been naive as well, treating the metahuman hunting like a game, while Oliver teaches Barry about the naivete that comes with thinking extremists can be reasoned with. Extremists require extreme measures, which is a hard lesson he learned from Amanda Waller several years back.

The flashbacks in this episode were brief, but effective. They showed Oliver having trouble torturing a suspect in Hong Kong to get the whereabouts of a bomb, after Waller orders him to do so. Oliver takes too long, the bomb goes off, and Oliver then has to learn that he sometimes needs to do extreme things to get results, as his squeamishness caused the deaths of many people. It’s just one of many traumatic experiences that Oliver suffered during his time away, but it helps to remind us that Oliver isn’t simply a brute, and there’s a very clear psychology behind his violent methods. 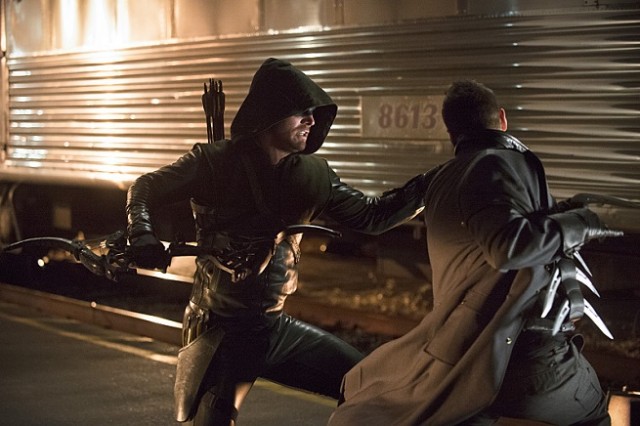 “The Brave and the Bold” was excellent, and the best that Arrow has been in many weeks. Cisco, Caitlin and Barry were well-utilized in their trip to Starling City, and both the narrative and entertainment value throughout the episode were top-notch. It makes “Flash vs. Arrow” seem like a mere appetizer in comparison, but thankfully, “The Brave and the Bold” gave fans the superb crossover that they deserve, in every way.

Arrow 3.8 Crossover Review: "The Brave and the Bold"
"The Brave and the Bold" realizes the full potential of an Arrow/The Flash crossover episode, with an excellent narrative, a fantastic villain, and outstanding entertainment value throughout!
THE GOOD STUFF
2014-12-04
95%Overall Score
Reader Rating: (0 Votes)
0%