y set a release date for their long-gestating X-Men movie spin-off, Deadpool, fans were abuzz about whether or not Ryan Reynolds would return to the role that he’s been lobbying for for many years, and partially portrayed in 2009’s ill-fated X-Men Origins: Wolverine.

Finally, Reynolds himself has confirmed via his Twitter feed that it’s chimichanga time! Er, more accurately, he will reprise his role as Deadpool, properly this time, for 2016’s Deadpool movie. Reynolds not only portrayed a pre-Deadpool Wade Wilson in X-Men Origins: Wolverine, but provided the voice for a CG rendition of Deadpool in some leaked test footage that made the rounds online, which fans extensively praised, likely being the ultimate catalyst for Fox and Marvel to finally commit to releasing the movie.

While no plot details have yet come to light for Deadpool, it’s confirmed that the character will break the fourth wall, as in the comics, and may address his infamously botched portrayal as the mute ‘Weapon XI’ in X-Men Origins: Wolverine directly. The movie will also take place in the same universe as the X-Men movies, though it’s currently unconfirmed if any established X-Men actors will appear in Deadpool. Given Wade Wilson’s role in the Weapon X program alongside one Wolverine though, a Hugh Jackman cameo would probably be likely. 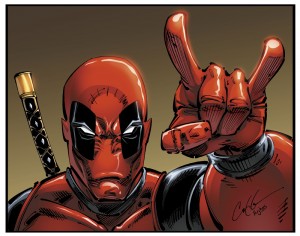 Deadpool was formerly a rather obscure semi-joke character in Marvel Comics canon initially, though in recent years, the character has surged in popularity and recognition, due to being a frequent mascot of several bits of Marvel media, namely video games like LEGO Marvel Super Heroes, where he serves as a tutorial prompter. Being the so-called ‘Merc with a Mouth’, Deadpool is famous for his cheeky, obnoxious sense of humour, his tendency to break the fourth wall and directly address readers and audiences, and his robust suite of combat capabilities, which include proficiency with swords and guns, a Wolverine-esque healing factor, and the ability to teleport short distances.

Deadpool will come to theatres on February 12th, 2016.

Keep poking at Eggplante for all news and updates on Deadpool, and other movie projects in 20th Century Fox’s X-Men movie universe.