It’s always cause for excitement when Tim Schafer and Double Fine Productions take the stage at a gaming event, and this is especially true of Double Fine’s recent partnership with PlayStation! Along with discussing Double Fine’s remastering of classic PC adventure game, Grim Fandango, Schafer also confirmed something else exciting– Double Fine would be remastering another of Schafer’s classics that he made when working for now-defunct LucasArts. 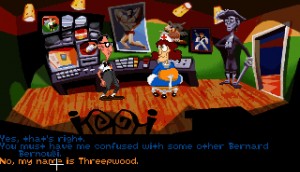 In Day of the Tentacle, players guide Bernard Bernoulli and his friends as they try to stop an evil sentient tentacle bent on world domination. During its initial run, the game was extensively praised for its gameplay, writing and quirky sense of humour.

Keep adventuring to Eggplante for all news and updates on Double Fine and their various projects.