As much as the PlayStation Experience has generated pretty much unanimously positive buzz between its heaps of news, announcements and general celebration of the PlayStation community, there was one announcement at the show’s keynote that has gone down in infamy. It’s not necessarily an uninteresting one, but it no doubt isn’t exactly what fans were hoping for. 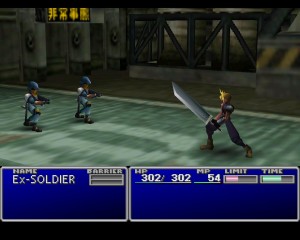 Er… Not exactly. As the HD re-release of Final Fantasy VII played out on the screen, it simply recycled the same dated PlayStation visuals from 1997. After a lengthy sequence of the same graphics and gameplay that RPG fans are already well familiar with, Square Enix then said that Final Fantasy VII would come to the PlayStation 4, as a port of the PC re-release that made its way to Steam last year, and that was the HD remake that they believed people wanted. Yes, seriously.

Needless to say, people weren’t amused, and many fans and journalists have already filled the internet with complaints and frustration, following Square Enix making the announcement. On the bright side, Final Fantasy VII will technically be fully playable on the PlayStation 4 now, and will no doubt support trophies at the very least in its latest release. Still, it definitely wasn’t what fans had in mind for an HD remake of Final Fantasy VII.

Final Fantasy VII’s ‘HD remake’ will come to PlayStation 4 in Spring 2015. For now, you can play the SD original version for $9.99 on the PlayStation Store, on PlayStation 3, PlayStation Portable and PlayStation Vita.

Keep summoning Eggplante for all news and updates on Final Fantasy.