As Sony kicked off their inaugural PlayStation Experience conference today, they demonstrated the first-ever gameplay footage for Uncharted 4: A Thief’s End, easily one of 2015’s most anticipated PlayStation 4 exclusives. The demo shown ran in real-time, with no pre-rendered CG footage, both at native 1080p resolution, and 30 fps animation, despite the game still being in the pre-alpha stage of development. 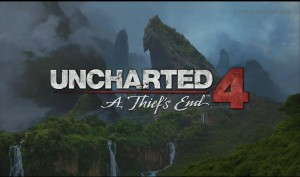 The demo showed off Nathan Drake navigating a network of caverns and cliffs, showing off the familiar mechanics of exploration and navigation. The series’ trademark climbing mechanics are intact, complete with dynamically breaking landscapes, though Uncharted 4: A Thief’s End will introduce a grappling hook for the first time. Using the grappling hook, players can not only swing around cliffsides, but also ambush enemies from above.

Environmental feedback has also been improved in the series’ PlayStation 4 debut. Drake reacts realistically with shivers when he drops into cold water for example, and appears to shield himself from dust as he climbs around. They’re small touches, but they elevate Uncharted 4: A Thief’s End above the already hefty polish of its PlayStation 3 and PlayStation Vita predecessors.

As enemies entered the demo, Drake was shown to be able to hide himself in foliage and surprise enemies. Melee combat is also shown to be far more detailed and dynamic, with Drake able to wrestle guns away from enemies as he attempts to subdue them. Drake can also yank enemies off of cliffs, who may cling on to him and force the player to shake them off, as well as use environments to help KO them. While the third-person shooting combat appears to be fully consistent with the other games, it appears as refined as ever as well.

The demo was light on story, though it did end with Drake meeting up with a fellow fortune hunter, who refers to Drake as, “Little brother.” Could it be that Drake had hidden family all along? Developer, Naughty Dog was coy on who this character is, and whether he actually is Drake’s brother, urging fans to play the game and find out.