The wait for one of the most celebrated and underplayed PlayStation RPG’s of all time, Suikoden II to finally come to the PlayStation Store in the West has been nothing short of agonizing. Things only got worse when the ESRB rated the game for the PlayStation Store, yet Sony and Konami denied an imminent re-release of the game. Finally though, after all this time, the wait is over. 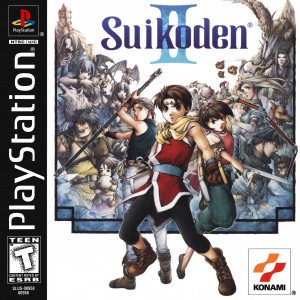 Speaking at the PlayStation Experience today, Sony confirmed that Suikoden II, easily one of the most requested PlayStation games that is not yet available to play on the PS One Classics line, will finally come to the PlayStation Store as soon as next week, on Tuesday, December 9th for Western gamers! The game has been available in the Japanese PlayStation Store for many years now, much to the frustration of North American and European RPG fans, who have had to try and hunt for the scant few localized copies of the original release, which often see skyrocketing prices on online marketplaces.

That nightmare is finally ending though, as a glorious light finally shines at the end of the tunnel!

For any further updates on Suikoden and high-profile PS One Classics releases, keep questing back to Eggplante.