During Season One, “Pontiac Bandit” easily stood as one of the best episodes. A brilliant guest appearance by Craig Robinson as the titular Pontiac Bandit led to the first really effective Peralta/Diaz team-up, and a worthy rival for Peralta to contend with in seasons to come.

Sure enough, as the episode suggests, Robinson’s Pontiac Bandit, Doug Judy is back for more, and neither he nor the episode disappointed! After a stroke of luck on the street, Peralta manages to arrest Judy, but Judy manages to worm his way out of the situation by promising Holt the identity of the lead Giggle Pig supplier. Diaz and Holt are forced to comply for the sake of the task force, much to Peralta’s chagrin, with Judy negotiating a reasonably lucrative hotel stay and a reduced sentence from his end of the deal. 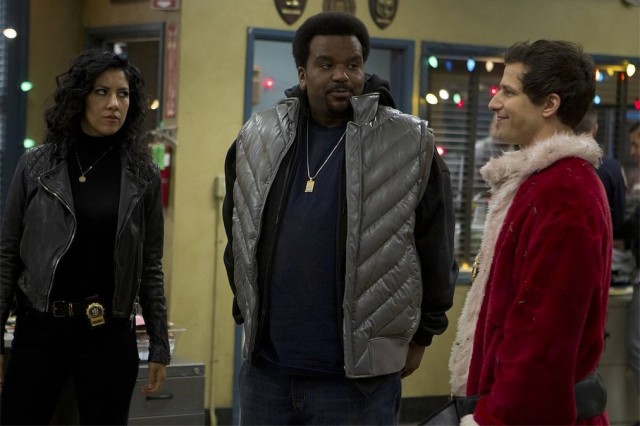 The episode could have had a one-note episode about Peralta being angry about the plea deal, which would have been fine, but it was great to see the writers take things one step further. Seeing Judy get into Peralta’s head and actually sort of befriend him was as amusing as it was surprising, playing perfectly to Peralta’s outward immaturity, particularly with Diaz standing by to look disgusted. Andy Samberg and Stephanie Beatriz worked wonderfully with Craig Robinson last season, and they’re better than ever together in this season!

In fact, it was a fleeting bit of fun, as viewers no doubt knew that the Pontiac Bandit would get away again after all was said and done, to continue being an occasional treat for the show between seasons. Again though, the writers could have phoned in some throwaway joke for Judy’s inevitable getaway, but having Peralta forced to let Judy flee so that he could take down the Giggle Pig supplier was a cool moment, and is a nice callback to Peralta and Diaz actually being good longtime friends, even if the show acknowledges this fact surprisingly rarely. It was also a nice twist to have Judy pulling the wool over both of their eyes the whole time, having an accomplice pose as a hotel staff member, who later secured his getaway, even if it did allow Peralta and Diaz to make the arrest.

The main plot is already quite funny and entertaining, particularly with the ending sequence of Rosa smiling and giddy, then wondering how people can do such things with their faces. Thankfully, the subplots were just as funny and effective too. 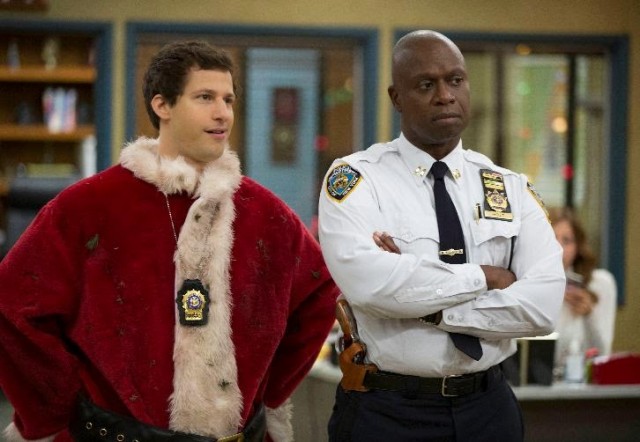 The B-plot saw Holt once again declare to the precinct that he doesn’t want any Christmas gifts (apparently, this is supposed to be the show’s Christmas episode), which Santiago inevitably tried to defy by trying to find the perfect gift-that’s-not-a-gift-technically. Hearing Santiago declare that the only thing she can think of that’s truly worthless is her time was quite funny in an ironic way, even if Jeffords was simply left to play the straight man to her usual neuroses in this arc.

The resolution of Santiago finding a mistake in one of Holt’s old cases as the perfect Christmas gift was cool, especially since it elicited a nice moment of Holt praising Santiago, and admitting that he doesn’t like Christmas gifts because he has a distaste for brown-nosing. If anything though, the effort presented its own reward with another very funny flashback of a  young upstart Holt detaining a serial arsonist, by declaring, “You’ve burned out… Dirtbag!” Young Holt is always welcome on this show. Always.

The only part of this arc that sort of felt botched was Holt refusing to read a scrapbook that Santiago made for him, and outright declaring to her face that he won’t read it. It sort of came off as a bit too nasty and callous, even considering Holt’s distaste for Christmas gifts. Why couldn’t he just placate her and pretend he read it? Surely, a smart man like Holt could figure that out, especially given how easy it is for him to please Santiago with base gratification. 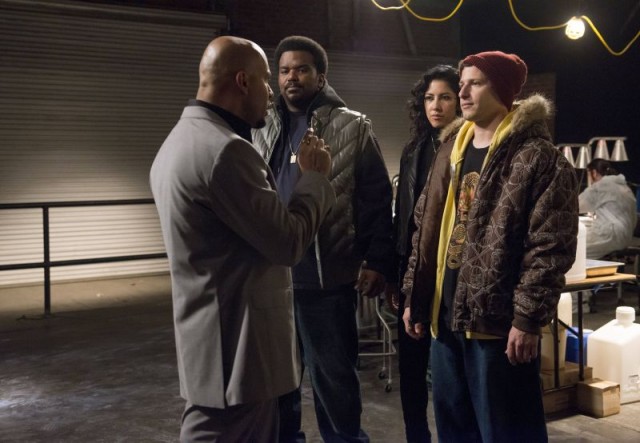 Once again, Boyle and Gina were left to the other subplot, but this one was even funnier. The two become distressed at a present that Boyle’s father is giving to Gina’s mother, and try to open it to see how serious the two are. It’s strange to think that the show has not capitalized at all on Boyle and Gina’s parents dating, since they had the one throwaway joke to end the episode when the two terminated their affair. Still, the payoff led to plenty of great jokes here, namely Gina’s skill at opening presents without evidence, and the two being thrilled that the digital scale under the wrapping was an apparently terrible gift, to the point where they decided to ‘double-date’ with their parents to see the disaster go down.

Except, it turned out to be the perfect gift, because apparently Boyle and Gina’s parents are moving in together, and just didn’t bother to tell their children. Again, it’s a bit annoying that these two have been dating completely off-screen, and the show suddenly remembered that Gina and Boyle’s parents are dating due to their childrens’ own pettiness and inadvertent punishment by Holt from a few episodes back, but maybe the show will take advantage of this idea more. After all, it looks like Gina and Boyle’s single parents are going to be together for the long haul now! 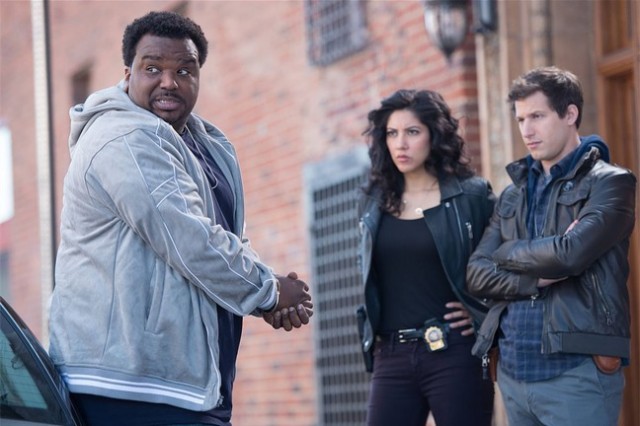 “The Pontiac Bandit Returns” was a very strong episode for Brooklyn Nine-Nine, with universally entertaining storylines, and plenty of great laughs. It was great to see the show go the extra mile and really try for some unexpected, yet satisfying payoffs to its arcs this episode, when it could have easily coasted on the success of the Pontiac Bandit storyline from Season One. Fortunately, we got something far better in the end.

Brooklyn Nine-Nine 2.10: "The Pontiac Bandit Returns" Review
The return of the Pontiac Bandit led to many laughs and a trio of well-executed plotlines, which delivered satisfying and creative payoffs, and an all-around satisfying Christmas episode.
THE GOOD STUFF
THE NOT-SO-GOOD STUFF
2014-12-09
87%Overall Score
Reader Rating: (1 Vote)
87%