After rumours of a Superman prequel television series called Krypton surfaced, David S. Goyer, screenwriter of Man of Steel and lead developer of DC Comics television series, Constantine on NBC, was rumoured to be the one behind the project. Now, it’s been confirmed that not only is the Krypton project real, but a network is already courting it. 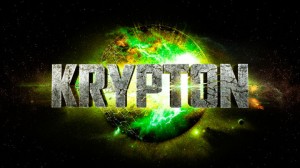 David S. Goyer is indeed executive-producing the Superman prequel series, alongside Once Upon a Time’s Ian Goldberg. The show is being planned to air on the Syfy network, predictably as a one-hour drama series, with Goldberg writing the pilot script based on a story pitch by both Goldberg and Goyer. If the pilot is approved, Syfy will gain its first DC television series.

Krypton will be set several decades before the planet explodes, and the main protagonist is said to be the future Superman’s grandfather, the father of Jor-El. This character doesn’t have a name or an actor yet, but the series will involve the mystery grandfather redeeming the House of El, after an unknown event leaves them shamed and ostracized in Kryptonian society. The El grandfather will apparently be the catalyst for turning Krypton, a planet in disarray, into one worthy of fostering the greatest superhero in the universe’s history.

DC has seen an extremely aggressive expansion into primetime live-action television lately, which has been kicked off more than ever this year. Following the success of Green Arrow-starring series, Arrow launching in 2012, which airs Wednesdays at 8:00 P.M. on The CW, the show gained an equally well-received spin-off, The Flash this year, along with two other networks gaining shows inspired by DC media, the aforementioned Constantine on NBC, and Batman prequel series, Gotham on FOX. Another Superman-themed series is going straight-to-series on CBS for next season as well, Supergirl, which is currently searching for a lead actress, and may share a universe with Arrow and The Flash. Other pilots in development include DC graphic novel adaptation, Lucifer for FOX, and a Teen Titans-starring series, Titans for TNT.

We’ll be keeping an eye on the development of Krypton on Syfy. Keep flying back to Eggplante for all news and updates on Superman-related media projects.