NOTE: Full spoilers for this episode of Agents of S.H.I.E.L.D., including two major character deaths, and a big setup for a future Marvel Studios movie, are present in this review.

To say that the Fall finale for Agents of S.H.I.E.L.D. was enormous feels like an understatement. Every mystery set up this season paid off in a big way, opening up a huge new part of the Marvel Cinematic Universe, and finally making Agents of S.H.I.E.L.D. feel like it’s truly leading the charge on a story arc that will re-shape the foundation of the MCU, not nearly to the degree of, say, Captain America: The Winter Soldier, but still quite a lot.

So, what are the questions we’ve been asking so far in Season Two? Who is Skye’s father? What’s the meaning of the carvings? What mysterious city do they lead to? What’s the true purpose of The Obelisk/The Diviner? How do the Kree fit into all of this? What’s the deal with Skye and Raina being implied to be something not-quite-human?

Believe it or not, the show gave answers to pretty much all of these questions, and some were pretty shocking, though Marvel fans are sure to love some of the reveals! It’s a good thing too, since Agents of S.H.I.E.L.D. won’t return until the beginning of March next year, spending the next two months replaced by prequel miniseries, Agent Carter. Fortunately, the midseason finale of Agents of S.H.I.E.L.D. proved to be stellar, standing tallest amidst a second season that has already been filled with excellent episodes.

So, without further ado, I’ll just come right out and say it; Yes, this is all a big lead-in to 2018 Marvel Studios movie, Inhumans. As of this episode, The Inhumans have now been introduced into the Marvel Cinematic Universe, and the mysterious city that everyone has been looking for is indeed Attilan, the home of the Inhumans. The episode doesn’t come out and use the term, ‘Inhumans’, nor the name, ‘Attilan’, but the showrunners have confirmed what many fans (including myself) suspected after the episode aired, cementing that, yes, Raina and Skye are Inhumans, and as with Marvel Comics, the Kree do seem to be responsible for their creation thousands of years ago, with the Inhuman city lying dormant under Puerto Rico in the meantime.

Before all of that though, we had a big moment that the season has been building up to up until this point, that being the reunion between Skye and her father. This was a brilliant dramatic scene, acted excellently by both Kyle MacLachlan and Chloe Bennet, with Skye’s father appearing to struggle with his dark, monstrous side, as he recounts to Skye how much he wanted to make their reunion better, complete with little almond cookies. It almost reminds you of a certain Robert Louis Stevenson character. It should, in fact, because this episode revealed that Skye’s father’s first name is Cal, as in, Calvin Zabo, the civilian identity of Marvel Comics super-villain, Mister Hyde, primarily an enemy of Daredevil and Thor in Marvel Comics. Moreover, Skye’s real name is revealed to be Daisy by her father, as in Daisy Johnson, Hyde’s daughter in the Marvel Comics.

Yes, this whole time, Skye has been Marvel Comics character, Daisy Johnson, a.k.a. Quake, a character with seismic abilities who eventually becomes head of S.H.I.E.L.D. Skye’s powers are awakened by her Inhuman transformation at the end of the episode (which seems to affect Raina more outwardly), which occurs when Raina finally brings The Diviner to the altar to awaken her Inhuman self. It’s a slight deviation from Marvel canon, to make Daisy Johnson an Inhuman, but for the MCU, it works. Naturally, we don’t get to see the emotional fallout of Raina finally getting to do what she’s been trying to do since Season One, but it will be interesting to see where the show goes with this result in 2015, particularly as a man who is revealed to have no eyes, someone who is already an Inhuman, answers a phone call talking about finding, “New ones”, no doubt referring to Skye and Raina. Looks like the Inhumans have been lurking in the shadows for quite some time already!

As Skye and Raina become mutated by the Terrigen Mists though, the same Inhuman substance from Marvel Comics, we see Trip trying to get Skye out after frantically disarming the explosives that would have buried Attilan, and forced to be in the same chamber as the Diviner explodes, implanting some of its pieces into Trip, and turning him into stone as well. Unlike Skye and Raina though, Trip simply crumbles to pieces, and creates an emotionally impactful scene of just how dangerous the mists are to normal humans.

Yes, Trip died this episode, despite being with Coulson’s crew since the later portions of Season One. It was a solid way to subvert fan expectations, particularly since Mac ultimately ended up surviving after coming to his senses, and being led out by Coulson. It’s a bit frustrating that we barely got to know Trip’s character in the end though, and it’s all the more frustrating when Trip already suffered a near-death experience that, ahem, Mister Hyde bailed him out of a few weeks back, only for the show to just have Trip killed off anyway a few episodes later. It’s a very small gripe for a fantastic midseason finale, but it stings all the same to see Trip gone so soon.

Trip wasn’t the only one to buy the farm either. Another clever way that the episode subverted expectations was having Coulson simply shoot Doctor Whitehall dead from behind, just as it seemed like Zabo was about to have his revenge for the murder of his wife, and Skye’s (Daisy’s?) mother. Zabo’s reaction toward Coulson robbing him of being able to kill Whitehall himself, with Coulson simply being confused about Zabo’s anger, was another great moment, followed up by the dramatic stand-off of Coulson threatening to put Zabo down if he didn’t get himself under control. So, in the end, we lost both a hero and a villain, with Agent 33 simply running off with Ward to pursue some other agenda, and leaving HYDRA pretty blatantly crippled as the show prepares to move full-tilt into the Inhumans foundation that it’s laid the groundwork for.

Frankly, this whole episode was nothing but amazing moments, especially from Skye. As Coulson and his team race to bomb Attilan, and later stop Raina (and fail), Skye, in the space of one episode, nearly kills her own father, successfully shoots Ward several times (even if he did have plating that helped him survive), and becomes an Inhuman. Finally, Coulson’s talk about how amazing Skye is really felt valid, after feeling much more valid since the start of Season Two already.

Likewise, May flying her way out of being shot down by HYDRA was an awesome moment, and the action in general this episode really didn’t disappoint. There’s just too much to go over in one review, but trust me, it’s all excellent stuff. 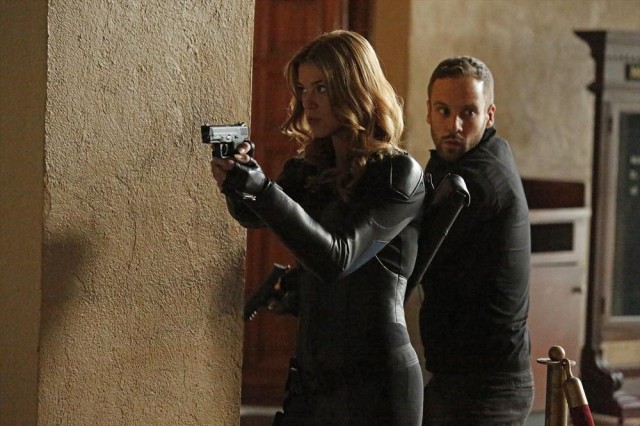 Between huge reveals, fantastic drama, quality action, and a brilliant tie-in to a future Marvel Cinematic Universe movie that finally made Agents of S.H.I.E.L.D. feel like it carries real weight in the MCU, this midseason finale was sublime in every respect, capping off an already sublime first half to Season Two as easily its best offering. It’ll be a far longer wait for the return of Agents of S.H.I.E.L.D. compared to most other shows this season, and it’ll be an even longer wait than that for November 2018’s release of Inhumans, but for a show that once began so troubled with its reception, it’s absolutely wonderful to see it deliver one of this Fall’s best midseason finales on TV this season, period.

Agents of S.H.I.E.L.D. 2.10: "What They Become" Review
"What They Become" answered the question of Skye and her father, and the true nature of the mysterious city, to outstanding effect, delivering a stellar midseason finale that finally made Agents of S.H.I.E.L.D. have some real impact in the Marvel Cinematic Universe.
THE GOOD STUFF
2014-12-10
97%Overall Score
Reader Rating: (1 Vote)
99%