Tonight was the midseason finale of The Flash, and as the episode’s title suggests, it finally puts Barry Allen face-to-face with the man who murdered his mother so many years ago. Yes, this is our first official encounter with a Reverse Flash, a perverse, evil speedster that has come in various forms in DC lore, most often as Flash arch-nemesis, Professor Zoom, and sure enough, this episode was a fantastic way to cap off 2014’s debut run of The Flash episodes.

After a S.T.A.R. Labs competitor, Mercury Labs (another clever nod to the inspiration for Golden Age Flash, Jay Garrick) is attacked by the mysterious man in the yellow suit, Barry and S.T.A.R. Labs soon discover that the attacker is indeed the murderer of Nora Allen. Eventually taunted and goaded into trying to fight Reverse Flash, Barry chases him around Central City, and inevitably gets the crap kicked out of him. As with DC Comics, Reverse Flash can run faster than Flash can, and this gives him an easy advantage over the Scarlet Speedster, with a particularly ominous warning about it being Barry’s destiny to lose to him to boot.

This definitely confirms that Reverse Flash has time manipulation on his side, which may create a very obvious suspect, and we’ll get to that. 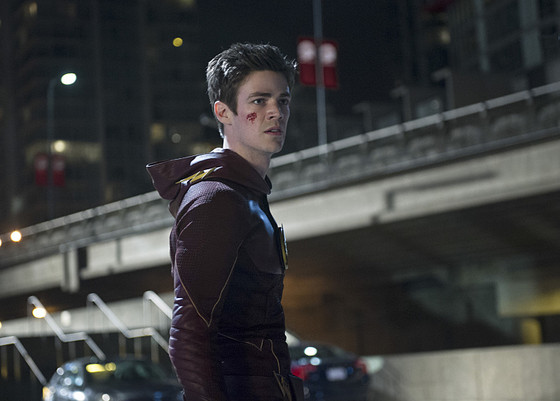 Aside from the business with Reverse Flash, Iris also gets a surprising Christmas present from Eddie, who asks her to move in with him. Barry is sub-consciously distracted by the news, which leads to him having a poignant conversation with both Detective West and his actual father about learning to move on from his mother’s murder, and find himself an actual life. Thus, Barry takes the terrible timing of professing his love to Iris this episode, and it was sort of good that the show didn’t force a result one way or the other. Iris broke down into tears as Barry was forced to leave her to think, with Barry later having to see Eddie at the West family’s Christmas get-together, pretending with Iris as if Barry didn’t just drop a huge emotional bomb on her.

In fact, “Emotional” is a very easy description for the Fall finale of The Flash. Caitlin and Cisco also had some bonding time, when Caitlin finds Ronnie Raymond alive and well, and even bears witness to his fiery new powers early on. Cisco helps Caitlin track Ronnie down, though Ronnie appears confused and unstable, simply telling Caitlin to stay away, and uttering the cryptic term, “Firestorm”, obviously in reference to Ronnie’s superhero moniker in the DC printed panels.

As cool as it was to see Robbie Amell re-appear as Caitlin’s assumed-dead fiance, the Firestorm material felt a little tacked-on, and was the sole drawback of what was otherwise a very strong Fall finale. The Firestorm arc felt forced, and Firestorm having to bail Barry out of a brutal beating by Reverse Flash after the second encounter at S.T.A.R. Labs felt a little bit too much like the writers just trying to weasel out of a corner they’d written themselves into. Sure, it’s no doubt very satisfying for DC fans to get their first real taste of Firestorm beyond a tiny epilogue at the end of last week’s crossover episode with Arrow, but it probably would have been better if Firestorm was left until 2015’s batch of episodes. 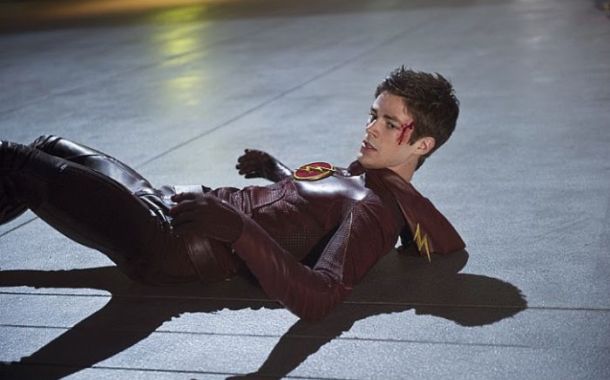 In any case, the preceding moment appeared to draw suspicion away from Wells, who constructed a force field that ultimately trapped Reverse Flash for a time, using the tachyon technology that Reverse Flash was apparently after as bait, allowing a brief chance for some answers before the force field overloads. Reverse Flash inevitably breaks free, killing almost every cop in the area… Except blatantly refusing to kill Eddie. Eddie even brings this up later on, confused. It’s the first nod by the show of Eddie’s likelihood of being DC’s Eobard Thawne, the civilian identity of Professor Zoom, The Flash’s future arch-nemesis, or at least having a direct connection to him. It’s possible that The Flash may be following a particular Zoom origin story of the comics, whereupon the past Thawne ultimately creates a self-fulfilling prophecy when he encounters a future where he has become Flash’s greatest villain. It’s anyone’s guess as to what Eddie is going to do with the anti-Flash task force now too, since he witnesses there being two speedsters, with the real Flash helping to save everyone.

Speaking of two speedsters, Cisco deduces that the combination of yellow and red lightning as Flash and Reverse Flash fought, lines up with Barry describing seeing both yellow and red lightning during the night of his mother’s death. Thus, it would appear that there were actually two speedsters present on the night of Nora Allen’s murder, creating the distinct possibility that Barry being whisked away from the house wasn’t done by the killer, but actually by the other speedster. Could Barry be preserving his past self? Was Barry the actual target of Reverse Flash, with his mother protecting him? Assuming that the Reverse Flash we’ve been seeing is indeed Professor Zoom, could Zoom be preserving his past self the same way by not killing Eddie? There’s a lot of good questions raised, which fans can ponder as we await the show’s return in 2015. 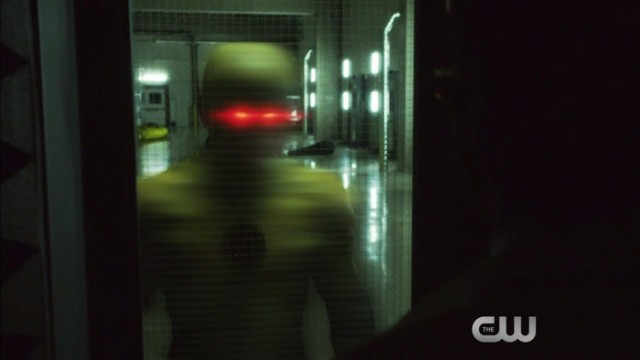 Of course, a whole new batch of questions yet again comes to light with Wells, who is the subject of a slight two-minute extension for The Flash’s Fall finale. Wells once again goes into his secret chamber and gets out of his wheelchair, having the stolen tachyon technology from Mercury Labs to himself, and placing it on a black suit that later turns yellow. Wells then vibrates his vocal chords to create the voice of Reverse Flash, and says, “Merry Christmas.” Yes, Wells is apparently a Reverse Flash, and the show appears to be suggesting that Wells has been behind all of the events this episode, and likely the initial murder of Barry’s mother that spurs him to become The Flash. I have to admit, if the implication is that Wells authorized his own brutal beating at the hands of Reverse Flash, that’s some dedication to his twisted cause!

Obviously, this raises a whole ton of mind-bending questions, but again, it’s a wonderful mystery for fans to ponder as we settle into the long wait for the show’s return. Even considering that Reverse Flash has some sort of time manipulation, how was Wells present during the encounter with Reverse Flash at S.T.A.R. Labs, if he is Reverse Flash himself? Assuming Wells isn’t supposed to be some future version of Eddie, are he and Professor Zoom separate Reverse Flash’s? Does this confirm my earlier suspicion that Wells is the show’s version of The Rival, the original Reverse Flash that served as arch-nemesis to Jay Garrick’s Flash? The initial black of his Reverse Flash suit may indeed suggest that Wells is supposed to be The Rival, and his obsession with perfecting Barry’s abilities may suggest that as well. 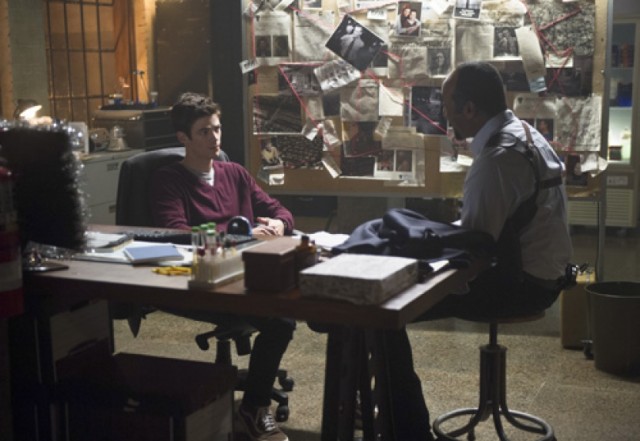 It’s most likely however that Wells is borrowing elements from the pre-Flashpoint Hunter Zolomon, the second incarnation of Professor Zoom, who is simply called ‘Zoom’. Zolomon was also paralyzed from the waist down (albeit legitimately in that case), had a connection to Gorilla Grodd, and had his super-speed as a result of time manipulation, not the speed force, as with the various Flash characters, and Professor Zoom.

If this is too much DC nerd’ing for you, I’ll sum it up thusly; There’s clearly more than one Reverse Flash in the show’s canon, and it seems that DC is hand-picking bits and pieces of all the Reverse Flash stories from DC Comics canon, and blending them into new, original characters for this show. In any case, Wells is sure looking like a bad guy now, unless he has some spectacular explanation of how the stolen tachyon technology ended up in his hands, and why he has a Zoom suit in his hidden room, and has some benign reason for all of that shady behaviour. Pretty damning evidence of his villainy, if you ask me.

Of course, it’s just as fun if this is all a cool red herring, and Wells has another agenda entirely with that Zoom suit. After all, the mystery behind Wells’ character is one of the best parts of this show! 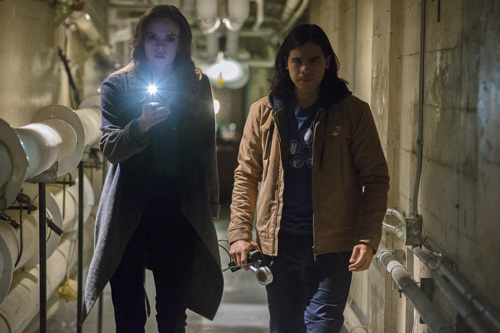 The fact that there’s so much to dig into with this Fall finale though is a testament to how excellently done it was. “The Man in the Yellow Suit” has really blown up the scale of the show, particularly with the introduction of the greatest threat in The Flash’s rogues gallery, and this episode will do a superb job of leaving fans on the edge of their seat for the show’s return next year!