For better or for worse, Harry Dunne and Lloyd Christmas haven’t aged a day. Perhaps it’s better that way. After all, the previous attempt to expand the story of these two loveable dimwits was 2003’s awful prequel, Dumb and Dumberer: When Harry Met Lloyd. Fans don’t need to be reminded of how that disaster turned out.

Thankfully though, we can perish the memory of the prequel, particularly since new franchise handler, Universal has now declared it be non-canon, and let’s all be thankful for that. Dumb and Dumber To brings the Farrelly brothers back on board, as well as original stars, Jim Carrey and Jeff Daniels, after their original 1994 breakout hit, for what is an overdue, but still proper follow-up to the original Dumb and Dumber. This is an especially big deal for Carrey, as this is only the second time that he has reprised a character for a sequel, with the only other instance being in 1995’s Ace Ventura: When Nature Calls.

In any case, the good news is that Dumb and Dumber To is actually a worthy follow-up, and is leagues better than the ill-fated Dumb and Dumberer: When Harry Met Lloyd. It predictably fails to surpass the 1994 original though, particularly since it feels like it’s re-treading a lot of the same humour. The jokes still work, especially since this sequel did take twenty years to get made, but they were done better in 1994.

Still, if you’re simply looking for a reunion with these two characters, or just a satisfactory and silly Fall comedy, Dumb and Dumber To gets the job done.

Harry Dunne and Lloyd Christmas are stupid. That’s the joke. That’s most of the movie. That hasn’t changed since 1994.

You have to hand it to Jim Carrey and Jeff Daniels though, since they really haven’t lost a step since 1994. Even if the story feels like a lesser version of the original’s humour, Carrey and Daniels are what make the sequel so entertaining, in spite of itself. Despite both actors being in their 50’s now, Harry and Lloyd still successfully come off like a couple of bumbling kids. I must admit that the excuse for the sequel’s twenty-year gap being Lloyd pranking Harry by pretending to be catatonic in a mental institution for two decades is oddly fitting too. Yes, it’s an incredibly stupid explanation, but hey, that’s the point. 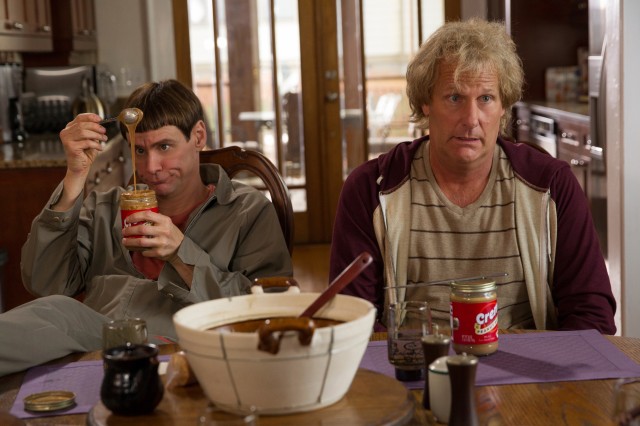 In fact, as much as the sequel tries to play with other characters and introduce new personalities, Harry and Lloyd are still the universal stars of the show, having the entire movie orbit around their gravitational pull of stupidity. In that sense, the sequel works as a series of sketches surrounding both characters’ idiocy to reasonable effect, much as the original did, and that’s the main draw for going to see a movie like Dumb and Dumber To.

Despite that, the sequel tries to introduce a big new development by claiming that Harry has a long-lost daughter, which he apparently conceived after his affair with Fraida Felcher, the young woman alluded to in the first movie (and sort of featured in the non-canon prequel), but never actually seen. Kathleen Turner plays an older Felcher, once the town hussy, and now a nearly unrecognizable sad sack. Again, you have to hand it to Kathleen Turner as well, since she goes for broke in the role of a used-up opportunist, nicely playing off of comments from the peanut gallery in recent years about Turner’s own drastic change in appearance. Despite being an outwardly detestable character, she even manages some good emotional moments later on with her long-lost daughter, Penny, played by Rachel Melvin.

If you’re noticing that Penny doesn’t exactly look like Harry, you can probably see where this joke is going. There’s a threat of a rather skin-crawling conclusion to the pursuit of Penny when Lloyd clearly develops a very creepy crush on her, but at least Penny’s character arc doesn’t exactly end the way you expect it to, just half the way you expect it to. She does certainly take after her father though, being a well-meaning, but heinously stupid person herself.

This just leaves the villains, who are yet more blackmailing crooks that the duo inadvertently run afoul of, just like the first movie. The Walking Dead’s Laurie Holden plays the main baddie, Adele, and Rob Riggle plays twin brother accomplices to Adele, allowing Riggle to deliver two diverse strains of a performance as a bumbling goon. Holden is alright, but Riggle is clearly allowed to do more, since this is a movie all about the juvenile gags, after all.

Let me recount the premise of Dumb and Dumber To for you; Two good-natured, but incredibly stupid friends go on a trip for the sake of a woman while being pursued by blackmailers that the duo are completely oblivious to.

Yes, this is literally the exact same plot template as the original Dumb and Dumber.

At the very least though, Dumb and Dumber To tries to some degree to mix things up. The introduction of Fraida Felcher in the flesh was a good idea, as is the hook of one of the guys potentially having a long-lost kid. Where the movie stumbles however is in relying too much on the same jokes, and some jokes that just feel odd, like Harry having racist-stereotype Asian parents. Expect more daydreaming from Lloyd, more lonely opportunism from Harry, and a huge share of callback jokes to the original movie. Even the dog van from the first movie shows up, and was plastered all over the marketing materials to boot, though don’t get too excited. It’s literally in the movie for about ten seconds, and feels like something of a cheat. You’ll see. 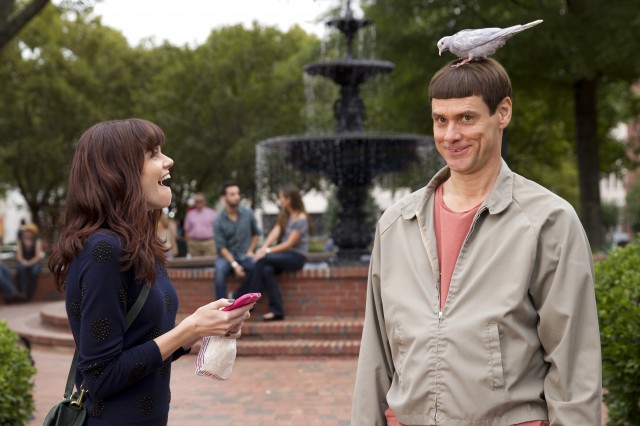 In any case, while Dumb and Dumber To is still funny, and tries to mix up the trip by having Harry and Lloyd hang on to a package of a breakthrough scientific discovery by Penny’s brilliant adoptive scientist father, it’s tough to get around the fact that it’s recycling a fair bit of the first movie. The recycling is a bit easier to forgive, given the huge gap between the first and second movies, but it’s still a big problem with too many comedy sequels. The story is unchanged, and only the jokes are different, though even a fair amount of the jokes were made in the first movie.

In that sense, Dumb and Dumber To presents a story that is clearly trying to be both a nostalgic throwback and a new spin on the formula, made explicitly for fans of the original movie. It’s funny enough, and not without its charm, but it still stands as a colossal missed opportunity to not put these characters in a different scenario than before.

The Farrelly brothers return to direct Dumb and Dumber To, revisiting their original breakout hit. Sure, the Farrelly’s only have so much range when it comes to making comedies, but their direction is still effective here.

The Farrelly’s do re-tread a lot of ground from the first movie, but in going back to their original winning formula, they strike a decent balance between familiarity and novelty when it comes to the jokes themselves. With the help of Carrey and Daniels, the Farrelly’s take otherwise juvenile, oddball gags, and do some cool, unexpected and highly amusing things with them. Sure, not every joke works, but most of them do, even if it’s nothing that will have you rolling in the aisles.

Taken as a comedy on its own merits then, Dumb and Dumber To is satisfactory, if not amazing. It’s definitely not as good as the original Dumb and Dumber, but it’s good enough, and that’s what counts. Considering that this sequel is arriving twenty years later, it does have laughs, and it does prove that both the Farrelly’s, along with Jim Carrey and Jeff Daniels, still have plenty of funny left in them. As much as it can feel like a rehash, it’s commendable that Dumb and Dumber To doesn’t feel nearly as late to the party as it actually is.

So, if more Dumb and Dumber sounds good to you, and you can keep your expectations in check, then Dumb and Dumber To makes for a welcome jaunt down memory lane. It’s just a shame that the sequel didn’t aim even just a bit higher.

Dumb and Dumber To Review
Dumb and Dumber To retreads its 1994 original to a fault, but it miraculously avoids feeling as late as it is, with Harry and Lloyd still feeling like they haven't missed a step in terms of generating some good, dopey laughs.
CHARACTERS70%
PLOT60%
DIRECTION75%
THE GOOD STUFF
THE NOT-SO-GOOD STUFF
2014-12-10
70%Overall Score
Reader Rating: (1 Vote)
66%