NOTE: Full spoilers for this episode of Arrow, including the identity of a long-teased murder culprit, are present in this review.

As with many shows this week, Arrow has just aired its Fall finale, before settling into several weeks of hibernation. Following yesterday’s Fall finale of spin-off, The Flash on the same network, Arrow also presented a showdown with a big villain, a big tease for another DC hero to enter the DC Television Universe, and plenty of romantic frustration to go around. More importantly though, as “The Climb” brings the League of Assassins back into play at last, we finally get answers as to who killed Sara at the start of the season.

Some fans may be shocked, and some may not, but I’ll get to that big reveal. 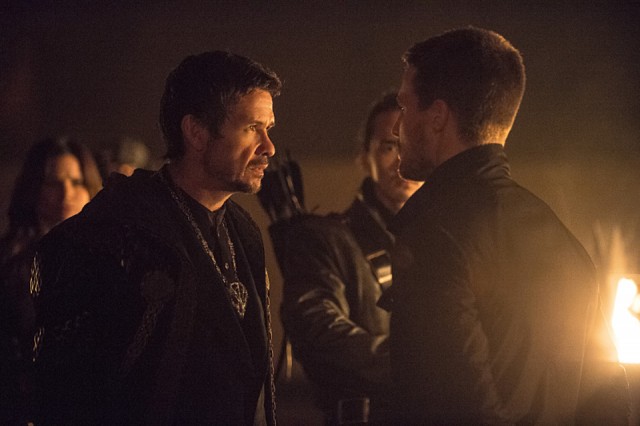 The episode begins with a flash-forward of Oliver approaching the big duel with his current nemesis, another similarity to yesterday’s Fall finale of The Flash. Shortly after, the show cuts back to a couple of days earlier, back in Starling City. Just as Central City is beginning its own Holiday festivities over on The Flash, Starling City is also gearing up for the holidays, with Oliver’s circles celebrating in their own (significantly less) way. The only real nod to Christmas this episode in fact is Thea trying to start a new Christmas tradition by getting a bigger tree for her apartment, to compensate for Oliver and Malcolm Merlyn being the only family she has left.

That’s not what the episode is about though. Instead, the plot is kicked off when Oliver is confronted by Nyssa Al Ghul and the League of Assassins, after a short criminal delivery to Captain Lance. Apparently, Ra’s Al Ghul’s inaction was done to see if Oliver would find the killer. Since Oliver has wasted too much time and exhausted Ra’s’ patience however, Nyssa warns him that if the killer is not found and delivered to the League in forty-eight hours, the League will start killing innocents around Starling City.

Needless to say, Oliver and his crew must try their best to expedite the process, which goes at least semi-smoothly, thanks to Caitlin’s help decoding the DNA strands after last week’s crossover episode with The Flash. The result turns in Oliver’s DNA, but obviously, that’s not correct. Apparently, since one of the strands is inaccurate though, the DNA must belong to a blood relative, which Oliver immediately rejects the implication of… Futily, might I add.

Yes, it’s finally revealed that Sara Lance’s killer is in fact, Thea Queen, Oliver’s own sister. A growing amount of fans started to suspect Thea, as she was the only person who appeared to fit the evidence, though her motive was flimsy at best. The episode finally reconciles this when Oliver pays a rather aggressive visit to Malcolm Merlyn though, whereupon Merlyn shows him a video of Thea definitely killing Sara, but reveals that she is under the influence of a mind control herb that makes her very suggestible, and leaves her with no memory afterward. Basically, it’s like a super, plot-convenient DC version of roofies.

On the one hand, this feels a bit like a cop-out, since it would have been a lot more interesting and dramatic if Thea had killed Sara of her own will. On the other hand though, I understand why the writers went in this direction. It re-establishes Merlyn as the huge threat that he’s supposed to be, and ties into what is actually a pretty clever scheme; To have Oliver fight and hopefully kill Ra’s Al Ghul, so that any blood debts from his line are erased, including Merlyn’s own. Even if Oliver loses, Merlyn’s greatest obstacle in Starling City is wiped out, so it’s a win-win. It’s a nicely devious plan, and seeing Merlyn exploit Oliver’s obvious weakness through Thea was very clever and very effectively sinister, all the more so when you consider that Thea is Merlyn’s own daughter in this case.

On a small side note, Oliver confronting Thea in her apartment was an excellent moment, especially when she shows off some of her fighting ability, and literally leaps off of the balcony to get away. The sheer look of amazement and bewilderment on Oliver’s face is one of this Fall finale’s most iconic moments, easily. 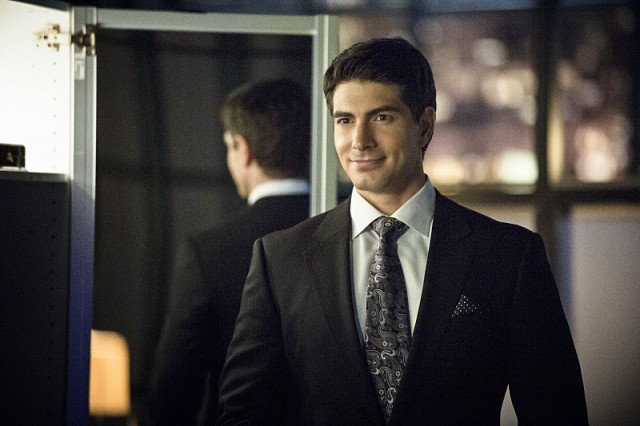 Outside of the business with the League, we got two big teases for heroes to come, albeit teases that were already touched upon earlier in the season. Dinah Lance pays another visit to town, and through super Mommy senses of some kind, deduces that Laurel has been hiding Sara’s death from her family, and especially her father. Yes, it’s a stretch, but it does help to push Laurel to where she needs to be for the show’s return in 2015, firmly on the path of being the DC Television Universe’s Black Canary. It was also a very cool moment when Dinah directly encourages Laurel in the graveyard to find whoever killed Sara, and to make them suffer.

The other big tease came yet again from Ray Palmer, who made his usual upbeat return, and boy has he been missed! After Felicity gives Ray the cold shoulder, following their seemingly ill-advised kiss a couple of episodes back, Ray finally takes her to Verdant, and confesses that his reaction came from something very surprising; He’s a virtual widow. This cements once and for all that Ray doesn’t appear to have any association with Jean Lohring in the DC Television Universe (so by sheer coincidence, Oliver and Laurel were discussing a completely different Ray and Jean during that Season One flashback), and instead had a different fiancee named Anna. Apparently, Ray was actually in Starling City during the attack of Deathstroke’s Mirakuru super-soldiers at the conclusion of Season Two, and suffered a broken leg after they attacked him, leaving him helpless as he watched Anna’s neck get snapped in front of him. Apparently, this is the reason why Ray came to Starling City and bought out Queen Consolidated in the first place.

This is the most dramatic and forthcoming that Ray has ever been as a character, and seeing Felicity’s tearful reaction to the news was very emotional. Against all odds, it also exonerates Ray from coming off as a douche when he walked out after the kiss, since his reasons are surprisingly legitimate. This also leads into Ray showing Felicity his plans for the A.T.O.M. exoskeleton, which he plans to use to, “Save the city”, at which point he also asks for Felicity’s help. Her reaction is as perfect as it is hilarious, as she wonders aloud why this sort of thing always happens to her. This is after all the third DC hero that she’s been involved with in some capacity!

Things became even more emotionally tangled when Oliver once again tells Felicity that he loves her, while also saying his goodbye’s to Roy and Diggle, after he is forced to turn himself in to the League, realizing that the only way to save Thea is to give his own life in battle with Ra’s Al Ghul. He knows that he’s likely walking to his death, and this leads into Oliver agreeing on a neutral location to exercise his right to duel Ra’s, passing himself off as Sara’s killer, which the faulty DNA evidence appears to back up. Oliver also learns that Maseo Yamashiro, the man he knew from Hong Kong, is alive and is now a member of the League of Assassins under a new name, which should raise lots of questions amongst DC fans.

In the flashbacks of this episode, China White pays a visit to Tatsu Yamashiro after Oliver and Maseo pursue a lead regarding a stolen bioweapon, developing Oliver’s torture talents all the while. White appears to get away with Tatsu, leaving an ominous blood stain for Maseo to find on the kitchen table. Could the DC Television Universe be inverting the backstory of Katana from DC Comics? Naturally, this is a very interesting development, especially since Maseo is shown to be alive and well in the present day, with Tatsu’s fate looking noticeably less certain.

Of course, the episode ends with the big moment, the duel between Oliver and Ra’s Al Ghul, shirtless on top of a snow-covered mountain, because why not. Oliver comes at Ra’s with anger and fury, and even with two blades, with Ra’s fighting unarmed, Oliver doesn’t even land a single hit as he gets his ass handed to him, effortlessly. Ra’s is as deadly an opponent as was implied, and seeing him successfully fight Oliver with literally one hand tied behind his back, unarmed, was downright terrifying. Ra’s even implied to Oliver that he is indeed immortal, as with DC Comics canon, and the fight ends with Oliver stabbed through the stomach. Ra’s says a prayer, and Oliver’s limp body drops off the mountain, thus ending the episode.

Now, obviously, Arrow isn’t going to kill off its main character. It does raise the question of whether Oliver will have to be revived with Lazarus though, the fictional DC chemical that gives Ra’s Al Ghul his immortality, and whether he may have to serve the League of Assassins in some capacity. It’s most likely however that Nyssa will secretly revive Oliver when the show returns, since she and Maseo are fully aware that Oliver is not Sara’s killer, and if Oliver dies in place of the killer, the killer gets away with Sara’s murder, consequence-free. Nyssa probably won’t let things happen that way, so Oliver’s bound to be back in action before long. It will be interesting to see how the show tries to get around a blatantly fatal wound and drop though. 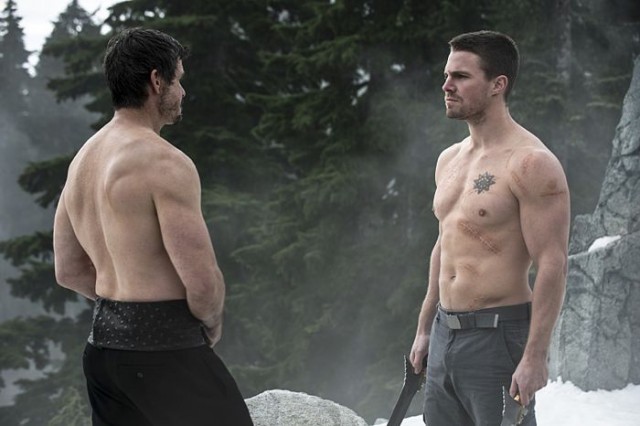 Arrow delivered a strong and very impactful Fall finale, with more than a couple of good shocks for the audience. With Oliver on death’s door, and Laurel apparently donning her Black Canary garb when the show returns, we’ll have to see if Starling City will be under some new protection when the show returns in 2015. Either way, with both Merlyn and the League of Assassins now at large, the city will need a hero!

Arrow 3.9: "The Climb" Review
Arrow capped off its 2014 episodes on a high note, with lots of effective character drama, a return to villainous form for Malcolm Merlyn, and some truly dire stakes for Oliver and all of Starling City.
THE GOOD STUFF
THE NOT-SO-GOOD STUFF
2014-12-11
92%Overall Score
Reader Rating: (0 Votes)
0%