2011 sported a strong Summer for comedies, thanks mostly to the combined likes of Bridesmaids, and Horrible Bosses. Horrible Bosses proved an especially original and fun dark comedy, with a star-studded cast, and plenty of laughs to go around. It was also a box office success, and the combination of its reception and ticket sales inevitably paved the way for a sequel.

Unlike the similarly-timed Dumb and Dumber To however, which reunited a good portion of the original’s creative team, Horrible Bosses 2 instead puts together a new director, new producers and a new pair of screenwriters, with only the lead stars reprising their former roles. In fact, Horrible Bosses 2 is somewhat ironically written by the same scribes that wrote Dumb and Dumber To, the other high-profile comedy sequel of November.

To the credit of Horrible Bosses 2, it at least better avoids the feeling of being a rehash compared to Dumb and Dumber To. Horrible Bosses 2 is more successful at separating itself from its predecessor, with an entirely new scenario and progression. Yes, the jokes often tread similar ground, but this is a comedy sequel after all. That’s pretty much to be expected.

Appropriately, Horrible Bosses 2 is about par with Dumb and Dumber To in the end. It’s not as good as its predecessor, but it’s good enough, and presents a reasonable amount of laughs. Some of its more tasteless jokes border on off-putting, and it once again seems to be explicitly designed for people who already really enjoyed the first movie, but if you’re among the people who liked Horrible Bosses, you should find Horrible Bosses 2 to be a satisfactory reunion with its three bumbling leads.

Nick, Kurt and Dale, played by Jason Bateman, Jason Sudeikis and Charlie Day respectively, are back, this time as entrepreneurs of a big new business idea. Apparently, the three have quit their jobs since the events of the first movie, and are pioneering, “The Shower Buddy”, or, if you go on Dale’s account, “The Shower Daddy.” It’s an all-in-one shower dispenser that, frankly, makes you wonder how these three idiots found the resources to even make a prototype, but we’ll chalk that up to suspension of disbelief. 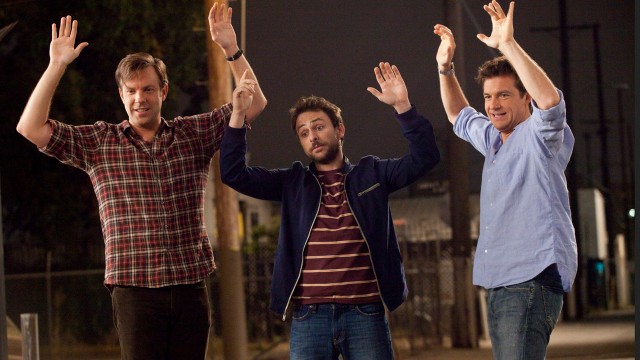 Initially, things appear to be looking up for Nick, Kurt and Dale, now free of the first movie’s titular ‘horrible bosses’, until they attract the attention of savvy investor, Burt Hanson, and his son, Rex Hanson, played by newcomers, Christoph Waltz and Chris Pine respectively. Burt scams the guys out of their invention, leaving them in heavy debt. Thus, the three men decide to put a sensible plan together after being left with no means of legal recourse, and that plan happens to be a kidnapping, specifically, snatching Rex and holding him for ransom.

Of course, things get complicated when Rex, who apparently hates his father, decides that he wants in on the scam, and coerces the guys into a risky extortion play, while a zealous detective, Hatcher, played by Jonathan Banks, nips at their heels all the while.

Again, to the movie’s credit, Horrible Bosses 2 avoids rehashing the same character conflict as the first movie. It tries to turn the characters on their heads, by making our leads the ‘horrible bosses’ this time, not the antagonists, even if the three still have the same one-note personalities of Nick being the reserved punching bag, Kurt being the optimistic go-getter, and Dale being the loudmouthed doofus. Left responsible for a bunch of destitute employees that they ill-advisedly hired, the negligence of the three is highlighted in an interesting new way, though not in a callous way. The outrageously desperate and seemingly unhinged lengths that Rex goes to in order to perpetuate the scheme help to avoid the implication that the three are bad people, and are more along the lines of unfortunate numbskulls who have been backed into a tight corner, and have no better ideas.

It’s a sound foundation, though the sequel’s excuses to revisit the original characters can sometimes be a little less successful, especially when they feel like they don’t fit with the story. The return of Jamie Foxx as Dean “Motherfucker” Jones works reasonably well, once again encouraging the leads’ stupidity with his ever-reliable terrible negotiation tactics. The all-too-brief return of Kevin Spacey as a now-imprisoned David Harken however makes you wonder how these three became entrepreneurs with no real business advisors that they could contact instead. Fortunately, Spacey is still one of the movie’s comedic highlights, stealing the show with his scant amount of screentime.

Similarly cheated is Christoph Waltz, who barely appears at all, despite being one of the movie’s main villains. Waltz is a suave, yet undeniably sinister presence, as he often is in many of his great roles, but it’s a shame that Horrible Bosses 2 doesn’t do more with him. His performance is great, even in a goofy comedy like this, but he feels like he’s only in the movie to add an extra name to the cast. That’s really unfortunate, as it feels like a slight waste of his talents.

The fresh face that really works here is Chris Pine, who puts his comical smugness to very good use here. Pine’s unpredictable, psychotic extortionist character is another big comedic highlight, and Pine plays beautifully off of Bateman, Sudeikis and Day to boot. Throwing a fourth accomplice into the plot could have put a big wrench in the works, but the inclusion of Pine in the sequel’s new kidnapping crime works, particularly since he’s allowed to take on the more shady responsibilities to avoid making the three leads too unlikeable, while still generating a good chunk of laughs himself. 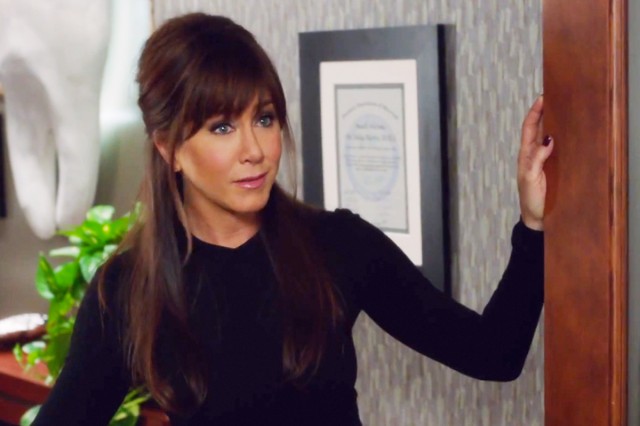 Horrible Bosses 2 marks a big moment for Jennifer Aniston as well, as this is the first movie sequel that she’s ever reprised a role in. Returning as nymphomaniac, Dale-obsessed dentist, Dr. Julia Harris, Aniston once again gets to let loose in a way that she never really gets to in most other performances. Julia hasn’t changed at all since the first movie, despite trying to take part in a sex addiction support group out of her own office, but fans likely wouldn’t have it any other way. Yet again though, Aniston’s return isn’t much in service to the movie’s plot, and she only seems to be there both as a callback to the first movie, and as an easy foil to an otherwise smooth plan whenever the script demands it.

The character work remains silly and simple, but in a dark comedy like this, it still works. The simple personalities of the first movie haven’t evolved, and of the new additions, only Pine is all that remarkable, but Horrible Bosses 2 still wisely puts laughs first, and thankfully avoids making its personalities more complicated than they need to be.

The foundation of three moronic losers trying and failing at a life of crime is intact in Horrible Bosses 2, even if the rest of the movie does try and mix it up. Still, this is a Horrible Bosses sequel, so one can expect more of the same bumbling criminal hijinx, even if in a different package.

Again, it’s commendable that Horrible Bosses 2 isn’t just happy to completely recycle the plot foundation of the original. There is clear effort made to separate the sequel into its own distinct story, one that still honours the legacy of its predecessor. On paper, the plot foundation for Horrible Bosses 2 is a strong mix of old and new, one that fans should be pretty happy with.

In execution, that’s still… mostly true. Horrible Bosses 2 feels a bit more outwardly contrived than its predecessor, even if it’s still a competent follow-up. It has to reach a bit more to a noticeable extent though, making it feel undeniably less smart, but then, why would one go to a Horrible Bosses movie looking for brains? Essentially, the increased stupidity in the sequel could easily be considered a flaw for casual viewers, but fans are very likely to forgive it.

It’s a good thing too, since fans seem to be the target audience of Horrible Bosses 2. If you haven’t seen the original, you can still enjoy the sequel if you’re not coming into it with a long list of demands. You’ll definitely get the most out of the story if you can recognize where it’s trying to build on the brainless foundation of its predecessor though.

Anders’ direction is acceptable, though it doesn’t feel as clever as Gordon’s. Horrible Bosses 2 is more on-the-nose with its ridiculous execution compared to its predecessor, which makes the laughs feel a bit cheaper, even if the movie itself is still funny overall. Again, a pessimist could easily claim that this is a dumber sequel, but these movies were never meant to be smart in the first place. It is true however that Anders displays less of an ability to execute the touchier jokes well, with some more tasteless and widely offensive jokes simply feeling cringe-worthy, rather than being funny in spite of themselves like they were in the first movie. 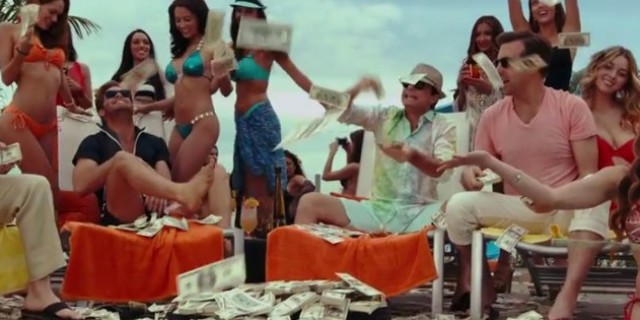 Ultimately, despite the sequel’s louder, brasher package though, Anders works as well as Gordon ever did with the leads at the very least, and nonetheless comes off as a relaxed helmer. The well-delivered and often-improvised lines from Bateman, Sudeikis and Day are still well worth the price of admission, as are even the small parts of Kevin Spacey and Jennifer Aniston. Everyone still looks like they’re having fun throughout the movie, as evidenced by another great selection of hilarious outtakes that play over the end credits, sometimes surpassing the material of the movie itself.

Gordon may have ultimately delivered a greater sense of novelty and surprising skill with such a ludicrous concept in the original Horrible Bosses, but Anders manages to hold his own, even if it’s the stars that really make the sequel.

Horrible Bosses 2 could have been better, but it could have been a lot worse too, which is about the same verdict I arrived at for Dumb and Dumber To. Fans of the original Horrible Bosses should have fun with it, especially since it does at least aim a bit higher than simply doing everything that the original did already. That could be one advantage to a different director, even if Gordon’s directing work did come off as a bit more novel and interesting in the first movie.

It’s easy to pick at the silliness and occasional tastelessness of it all, but Horrible Bosses 2 knows what it is, and bravely goes for broke with its premise, logic be damned. It wastes some of its ensemble cast, and some more controversial jokes land with a pretty heavy thud this time, but all in all, it’s a good time for the laid-back moviegoer who just wants to have some good, irreverent fun. 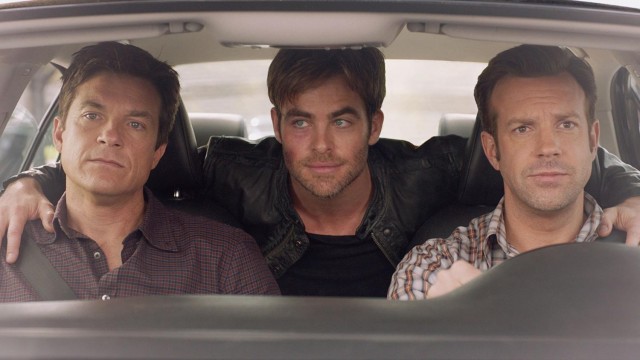 Again, there’s really not much to say about Horrible Bosses 2 in the end. It’s a sequel to Horrible Bosses, and that pretty much tells you everything you need to know. It’s competently-made, still gets great mileage out of its three leads, and adds some worthwhile new elements for returning fans with its new scenario, along with more jokes that work than ones that don’t.

It may not quite reach the standard of the first movie in the end, but there’s certainly nothing horrible about this follow-up.

Horrible Bosses 2 Review
Horrible Bosses 2 falls shy of the first movie, but it still offers a good chunk of laughs for fans, with most of its ensemble cast continuing to steal the show in a story that thankfully avoids feeling rehashed.
CHARACTERS75%
PLOT70%
DIRECTION60%
THE GOOD STUFF
THE NOT-SO-GOOD STUFF
2014-12-14
70%Overall Score
Reader Rating: (0 Votes)
0%