Brooklyn Nine-Nine is our final network show to deliver its Fall finale for 2014, and as with most of the others, it’s an especially great one! “Stakeout”, despite airing after the Christmas episode of last week (continuing to suggest that the season’s episodes are all airing a week earlier than NBC intended), feels like an appropriate and cool Fall finale, since it effectively explores a new dynamic between Peralta and Boyle, and sets up a new love interest for Diaz.

In the wake of the Giggle Pig network takedown, Peralta and Boyle volunteer for an eight-day stakeout assignment to catch some weapons traffickers. Despite the precinct’s warnings about how irritable two cops get when they’re forced into a confined space for even just a couple of days, Peralta and Boyle scoff at the warnings, and announce that their friendship is impenetrable and unshakeable.

You can see where this is going. 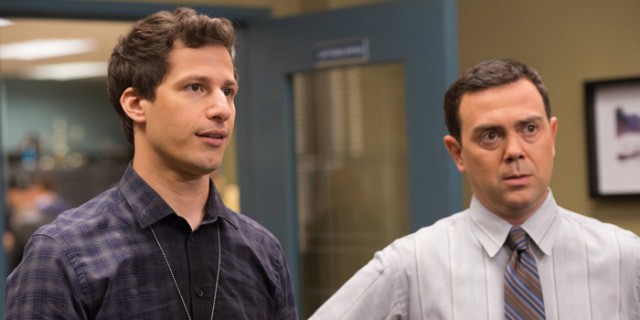 Naturally, Peralta and Boyle end up getting annoyed with each other’s eccentric habits, which eventually leads to them writing out all of them on a whiteboard. This is hilarious not just for some of the random notes that give us insight into what Peralta and Boyle could be like off-screen, but also for some of the legitimate things that even audiences would have noticed, like Peralta’s tendency to constantly talk about Die Hard, or Boyle’s aesthetically revolting eating habits.

This comes to a head when Boyle accidentally tosses a basketball through a window, and it ends up bouncing into the enemy territory, making them pack up and flee. Peralta and Boyle then have to try and explain to Holt what happened, and act like they won’t be friends anymore. Of course, audiences know better, and the two have patched things up just a few minutes later after having the incredible fortune of stumbling on the person they’re looking to arrest for the weapons on their first stop.

This is the one part of the episode that suffered, likely due to a time constraint. Peralta and Boyle’s spat ultimately felt like it amounted to nothing, and them just magically finding their bad guy on the first routine door duty stop, and deciding they were friends again afterward, felt rather contrived. Again, there probably just wasn’t enough time in the episode to give this arc the proper development, but trying to explore the idea of Peralta and Boyle having their limits with each other, then not doing anything with it, is a pretty big missed opportunity. 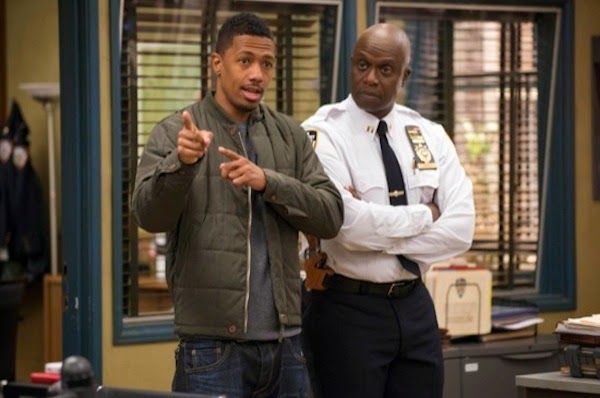 Fortunately, the other characters, like most of Peralta and Boyle this episode, fired on all cylinders. A B-plot involved Holt’s nephew (played by Nick Cannon) coming to live with Holt and his husband temporarily (with Holt emphasizing in a very funny, passive-aggressive way that the nephew is 31 more than once), and Diaz becoming instantly attracted to him. Meanwhile, a C-plot involved Jeffords trying to make a picture book for his daughters, which Santiago and Gina take issue with when they feel that he’s drawn on their character flaws for the story.

Between these two great plots, the B-plot with Holt and Diaz was the biggest highlight, as it showed different sides to both characters. Holt suddenly being insecure and confused was very funny, especially when he seems to view his nephew as some kind of screw-up (albeit sub-consciously), and seeing Holt and Diaz try and navigate around each other’s boundaries was downright hysterical. Thankfully, the two did manage to come to an understanding when they decided that Diaz could date the nephew, as long as they never brought it up. This was made even funnier when Holt was forced to return the bra that Diaz forgot at his house, which was inside a tiny brown envelope. Seeing Diaz then aggressively snatch the envelope and scowl was priceless too. 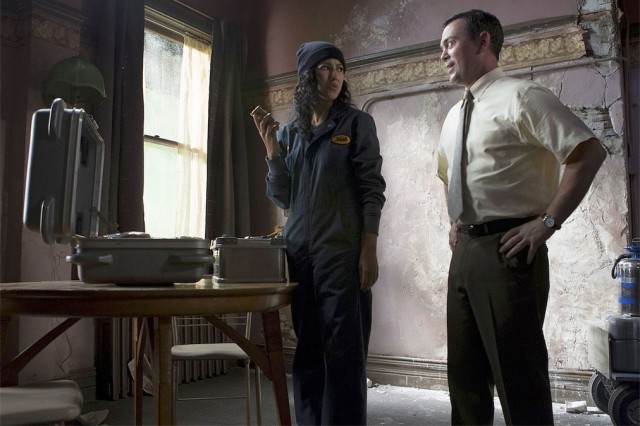 Hopefully, this sets up a promising new romantic arc for Diaz, who is one of the show’s only characters at this point to go without a major significant other. There isn’t much to Holt’s nephew’s character yet, but here’s hoping that changes soon too.

As for the C-plot with Jeffords, Santiago and Gina, it had some strong jokes throughout, and it was especially funny to see the hilariously futile attempts by Santiago to be assertive, and by Gina to be nice. The arc eventually ended with Jeffords simply impressing on the two that the book is nonsense and they shouldn’t be so bothered by it, but it was very funny to hear tiny tidbits about how weird and convoluted Jeffords’ story apparently was, incorporating moose wishes, dolphin kingdoms and pants suit armour, among other things. 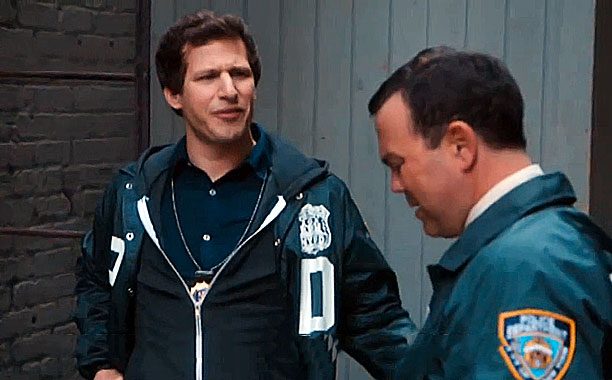 “Stakeout” was a superb conclusion for Brooklyn Nine-Nine’s 2014 run, with amusing and witty character arcs for all of the lead cast. I’ll miss the precinct during the Winter hiatus, but at least they didn’t leave my funny bone cold!