After it was confirmed that Don’t Trust the B— in Apartment 23 star, Krysten Ritter would be portraying the title character in Marvel Cinematic Universe-set Netflix series, A.K.A. Jessica Jones, there were rumblings about Marvel Studios also courting Halo: Nightfall star, Mike Colter for the title role of another MCU series headed to Netflix, Luke Cage. Now, it’s been confirmed that Colter has been signed for the role, and will officially portray the streetwise strongman for the MCU!

Originally debuting as ‘Power Man’, Luke Cage later dropped a superhero moniker to simply go by his real name as a Marvel superhero, though his birth name is actually Carl Lucas. One of the first high-profile African-American superheroes for Marvel Comics alongside Black Panther and Falcon, Luke Cage debuted in 1972, as an attempt by Marvel to exploit the Blaxploitation fad in cinema at the time. Gaining superhuman strength and impenetrable skin from a scientific experiment that was intended to kill him, Luke Cage used his power both for heroism and for profit, starting a business called ‘Heroes for Hire’. As a fun fact, Hollywood actor, Nicolas Cage, a rabid comic book fan, also derives his stage name from Luke Cage.

When Cage became unable to sustain his own Marvel series due to the decline in Blaxploitation media, he was paired with Iron Fist, another character that was inspired by a declining movie genre, the martial arts movie, and would later become a love interest and husband to Krysten Ritter’s MCU character, Jessica Jones. While Iron Fist has yet to be cast, Ritter’s Jessica Jones, Colter’s Luke Cage and Charlie Cox’s Daredevil will form a quartet of superheroes for crossover miniseries, The Defenders, which will also air exclusively on Netflix, along with each of the four individual shows.

While Luke Cage will star in his own Netflix series, Colter will actually debut the character in A.K.A. Jessica Jones, where he will be the subject of one of the show’s episodes, with Jones encountering Cage in a way that will change her future forever. A.K.A. Jessica Jones will come to Netflix in 2015, following Daredevil, which recently wrapped production, though Luke Cage nor Iron Fist have been confirmed for a 2015 debut quite yet. 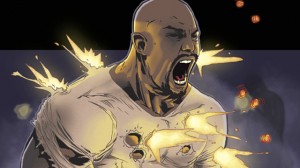 No writers, showrunners or other actors have yet been selected for Luke Cage, and no supporting characters or villains have been decided on yet either.

Keep hiring Eggplante for all news and updates on Marvel’s Netflix projects, including Luke Cage and A.K.A. Jessica Jones.