The Interview sure has made a right mess of things for Sony Pictures. After a massive hacking scandal, and reports of the movie provoking the government of North Korea, the movie was pulled from wide theatre chains, and at a certain point, it looked like it wouldn’t be released at all. Sony at least partially overturned their decision in time for the planned December 25th release of the controversial Seth Rogen/James Franco comedy, ultimately releasing the movie to the public via VOD, YouTube and Xbox Live (though strangely not Sony’s own PlayStation Network) on Christmas, and allowing moviegoers to see what the fuss is about from the comfort of their own homes.

… But was The Interview really worth such a fuss? Frankly, no. 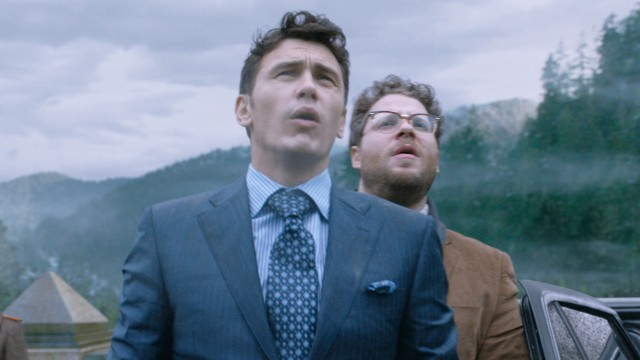 That’s not to say that the movie isn’t funny. It has a decent share of off-the-wall chuckles, and even some surprising (albeit miniscule) political insight, even if it still ultimately pales in comparison to last year’s superb directing debut for Seth Rogen and writing partner, Evan Goldberg, This is the End. The Interview ultimately amounts to a relentless farce that seems initially brash and irresponsible, but in the end, is far too ludicrous and juvenile to effectively take seriously. It’s the modern answer to Charlie Chaplin’s 1940 Hitler satire, The Great Dictator, as interpreted by a couple of high-off-their-ass jokers who are the furthest thing from a real political concern or draw.

If you’re simply looking for some brain-off entertainment that holds up a slightly clever, but mostly silly cracked mirror to one of our modern world’s most twisted, yet intriguing dictatorships, The Interview will give you some easy laughs. Don’t expect anything truly controversial though.

In the returning double act of Seth Rogen and James Franco, Rogen is once again left to play the straight man to Franco’s eccentric foil, as with much of This is the End. The movie primarily centers on Franco’s character in this case though, Dave Skylark, a trashy, yet nonetheless successful talk show host that interviews celebrities about irrelevant personal details. Think TMZ meets Between Two Ferns, if Between Two Ferns was actually a serious talk show. Rogen’s second lead, Aaron Rapoport, is Dave’s producer and longtime friend, and ultimately the voice of reason to Dave’s sleazy antics both on and off his show. 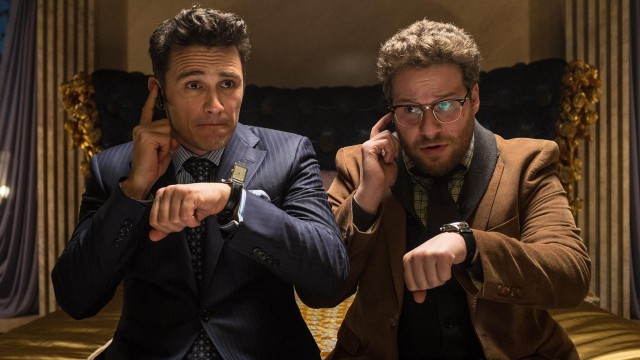 Despite Dave’s show appearing to be bottom of the barrel, it’s apparently loved by North Korean dictator, Kim Jong-un, who has agreed to do a one-hour interview in his home country with Dave. Dave is initially thrilled at his chance to rise to true fame, but things get complicated when a, “Honey-potting” CIA agent, played by Lizzy Caplan, coerces Dave and Aaron to covertly assassinate Kim Jong-un during their time in the country.

As much as Rogen and Franco are already walking into dicey territory, if anyone is standing out here, it’s Randall Park as Kim Jong-un. The dictator is undeniably made out to be a fool and a crybaby in several scenes, but Park is still surprisingly menacing and unhinged when he needs to be. This is a challenging part to play, and Park rises to the challenge, making a villain that is simultaneously psychotic, goofy and oddly charming. Even when he’s belting out Katy Perry anthems with James Franco, Park adds a weird degree of twisted humanity to one of the world’s most unpredictable and intriguing leaders.

Yes, it’s a purely satiricial portrayal, but The Interview actually comes close to tapping into something greater with Park’s portrayal of Kim Jong-un. It doesn’t quite hit the mark, but it almost achieves something higher than what it initially set out to do, much like This is the End did. Maybe it’s accidental, or maybe it’s just most of the way to surprising comedic genius, but the bottom line is that The Interview’s assessment of North Korea and its supreme leader is not entirely without merit, even if it’s still not an assessment that anyone can ultimately look at with a serious, discerning eye. 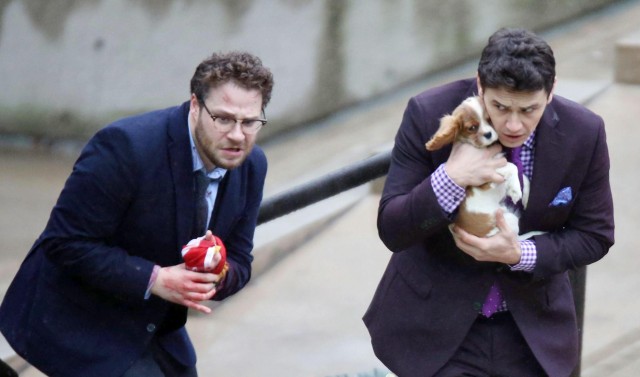 On that note, other movies like Team America: World Police have certainly offered harsher and more critical viewpoints of North Korea, and other such controversial nations. It’s ironic that The Interview would be singled out, because if anything, The Interview is far less biting. It even takes several shots at our own Western media and consumer base, and too many people’s constant need for trashy character defamation of media personalities, for trashy character defamation’s own sake, especially through the character of Dave, a character that is played to be as much of a buffoon, if not more of one, than Kim Jong-un.

There are a couple of female characters in the movie to round things off, starting with Lizzy Caplan’s CIA agent. Caplan is another actor that stands out in what’s otherwise a pretty ridiculous farce overall, even if she’s not given much to do past the movie’s first half, after the mission is set in place, and Aaron and Dave are inevitably left to botch their training left, right and center. The remaining leading lady is in North Korea itself, Sook, played by Diana Bang, an exaggerated sexy librarian who is abrupt, commanding and handy with a machine gun. Sook mainly amounts to being a comical love interest for Aaron, even if she’s the most objectively human look at the true plight of North Korea, behind the politics.

Again though, for all of its supposed desire to spotlight such a controversial place as North Korea, few of The Interview’s personalities truly have any teeth. There is more to the movie than simple silliness, but most of the recipe is overblown silliness all the same. The fact that Rogen, Goldberg and Franco mined anything coherent and insightful about such a challenging, controversial subject though, however limited their spoils are, is still praiseworthy, even if the tiny bits of wisdom are still buried under a whole lot of simple-minded craziness.

I’ve pretty well summed up the plot of The Interview already, which could be distilled in its simplest terms down to two idiots being strong-armed by the CIA into assassinating a real-world dictator. Cue silliness.

Naturally, very few things, if anything, go according to plan in The Interview, with most of the movie being based around jokes centering on false pretenses, and of course, dick and butt jokes. Let’s not forget who is behind this production, after all. 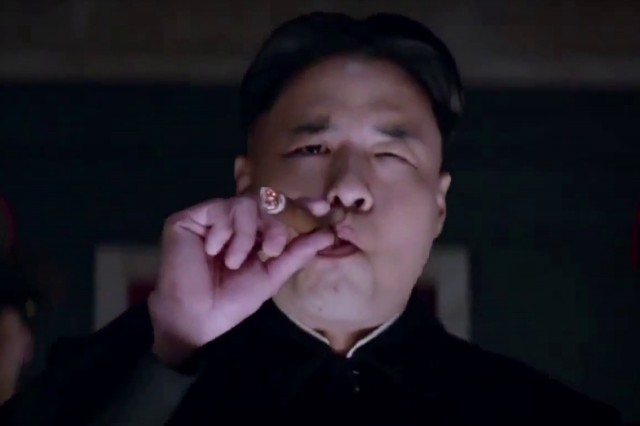 It might be easy to see why reducing a real-world dictatorship and dictator to a source of buffoonery and mockery might be a touchy subject, especially when people actually are starving and oppressed in North Korea, but perhaps The Interview is trying to help us understand something that can’t be understood, with humour. Yes, Rogen, Goldberg and Franco are clearly just setting out to make a funny, silly movie first and foremost, but the silliness may help us interpret and come to terms with what’s actually going on in one of the world’s most strange and deadly countries. Maybe the crew doesn’t fully know the subject that they’re dealing with, especially since their insight and satire turned out a lot better in This is the End, but The Interview is made with genuine heart, even if it’s also done with stoner-fueled carelessness.

Even though there are times where The Interview grazes upon genuine insight, for the most part, the story in the movie is pretty innocuous, and not really worth reading into all that much. It’s elevated slightly above being simply disposable, even if it’s no Team America: World Police, and while certainly not the best yarn that Rogen and Goldberg have ever spun, it’s fun while it lasts. Again, the fact that this movie could even remotely be considered controversial is sort of cute, since it’s clearly not made with that intention, nor is it put together by people who could really effectively take on a subject as large and complex as North Korea.

Trust me, your brain is best left at the door. The Interview definitely isn’t aiming to make you any smarter.

Rogen and Goldberg make their sophomore directing effort here after their great work helming This is the End. Developing the story with Dan Sterling, and also working as producers, Rogen and Goldberg produce what is undeniably their own take on a challenging political issue, albeit one with little stirring substance actually behind it.

Putting aside the politics though, The Interview is a movie that’s put together with no shortage of energy and drive. The snappy comedic timing helps to compensate for some of the weaker lines, and overall, the movie’s sense of silly energy is enough to make it infectiously charming, even if you’re not a fan of political comedies. Again though, it’s a bit odd to call The Interview a political comedy, when it’s more interested in simply being a dunderheaded farce, one that just happens to take place in North Korea.

While they fly a bit too far off the rails at times, Rogen and Goldberg’s direction produces a movie that is mostly funny in spite of itself. Even when it borders on bad taste, and it predictably does so quite frequently, The Interview can’t help but be respectable in going for broke, and almost actively embracing being in way over its head. Maybe that’s the whole point. The movie itself feels just as manic and confused as its lead characters. It kind of works when you think about it that way.

Still, that amounts to The Interview being a pretty simplistic gagfest which seems to solely care about laughs, sometimes cheap, but no less effective. If nothing else, Rogen and Goldberg helm the movie with vision, and try not to bite off more than they can chew, happy to deliver a final product that is content to embrace a lack of brains, which is perhaps more admirable than being stubbornly determined to make a stirring political satire and failing.

The Interview is a dopey two hours of virtually unfiltered idiocy. It has the approximate political menace of a squirt gun filled with apple juice.

But The Interview isn’t interested in controversy. It’s interested in just having fun and being entertaining. Maybe it’s slightly irresponsible fun, but no truly memorable comedy has ever played it safe. Still, being threatened or considering The Interview to be a threat would make you stupider than the movie itself. To provide a comparison for our own backyard, that would be the equivalent of listening to a couple of stoners make fun of the president on your couch, then declaring those stoners to be terrorists that are threats to national security. Why?! Rogen, Goldberg and Franco are the type of comedians that are more interested in smelling their own farts than actually changing hearts and minds, and you know what, that’s fine. That’s what they’re good at in this genre. More importantly, that’s what people pay to see them do. 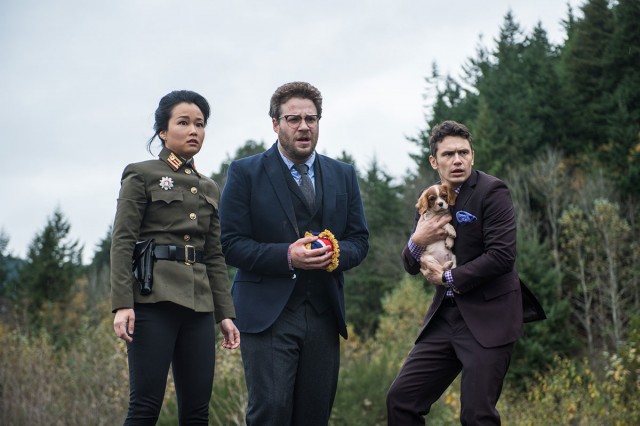 So, objectively, The Interview is a silly movie that shines a silly light on a real-world issue, not totally knowing what it’s doing, but not causing any real harm. If you want to yuk it up with your buddies, The Interview is a worthy, if merely decent farce. It falls short of This is the End, but it’s nonetheless amusing and not entirely devoid of wisdom or inspiration, even if it’s still the kind of wisdom or inspiration that one would come to on the ganja. If you’re interested, go ahead and give it a rental. You’ll get a smile out of it.

One really shouldn’t be putting this movie on a political pedestal though. Somehow, I don’t think Rogen, Goldberg and Franco are actually interested in the debate.

The Interview Review
The Interview is a movie that is too dopey and brainless to incite any real controversy. As an immature farce, it's entertaining enough, but really nothing to write home about.
CHARACTERS70%
PLOT75%
DIRECTION75%
THE GOOD STUFF
THE NOT-SO-GOOD STUFF
2015-01-02
73%Overall Score
Reader Rating: (1 Vote)
67%