NOTE: Some spoilers for the events of Halo: Nightfall are present in this review.

Halo: Nightfall is an Xbox original miniseries that is featured on the Halo Channel app, available on Xbox One, current Windows Phone devices, and Windows 8.1-enabled PC’s. Spanning five episodes that were gradually released during November and December, the miniseries is a bonus that is exclusively awarded to owners of Halo: The Master Chief Collection for Xbox One at this point, meant to lay some of the groundwork for this Fall’s Xbox One blockbuster, Halo 5: Guardians by introducing a pivotal character for that game, Jameson Locke.

Players can occasionally use their controller/input device to access bonus features, namely bonus clips called ‘Second Stories’ that help to flesh out the backstory and character dynamics behind the series as well. This leads to it feeling like Microsoft’s first truly ambitious effort to combine the likes of television and gaming, even if said effort is coming after the Xbox One has already been available for a year.

Unfortunately, as with many first attempts at something experimental and ambitious in a blend of mediums however, Halo: Nightfall feels like a rough draft, and is ultimately a disappointing experience. This is exacerbated by the miniseries largely failing to replicate the tone and feel of the Halo franchise, and further stumbling in failing to establish Locke as anyone interesting and of note for his interactive debut in Halo 5: Guardians towards the end of this year.

The miniseries begins with some undercover ONI agents tracking the exchange of a mysterious package between an alien denizen and a Covenant Elite Zealot on the backwater colony planet, Sedra, appearing to take place shortly after the events of Halo 4, and obviously leading into key events of Halo 5: Guardians. After an Elite Zealot appears to detonate the package following a tense chase, a spreading array of citizens come down with a deadly plague, which seems to target some people, and not others, giving them massive cellular breakdown, blackened veins, and eventually, death.

Immediately, this sort of feels like lazy writing, since the virus’ patterns don’t have any rhyme or reason, particularly in how it just arbitrarily spares Locke, among the other lead characters as well, despite many of them being in ground zero of the attack. Things become all the more far-fetched when it’s suggested that the virus is a miniaturized version of what happens when a Halo ring is activated, though the Halo rings are supposed to wipe out all organic life as established in earlier Halo canon, including previous games. Why a miniature Halo event has suddenly come up, and only attacks humans, feels frustratingly unclear at this point. Maybe Halo 5: Guardians will shed some more light on this situation, but for now, it just makes for a weak and confusing beginning to this miniseries.

Most of the miniseries doesn’t take place on Sedra however. Instead, it unfolds upon the source of the mysterious virus, a drifting shard of Alpha Halo, the same ring that Master Chief destroyed at the conclusion of the original Halo: Combat Evolved game. Master Chief is never seen in Halo: Nightfall, which is fine, since this is supposed to be Locke’s origin story, though the unrecognizable Alpha Shard setting is one of the only persistent elements of Halo: Nightfall that feels all that rooted in the Halo universe for the most part.

Sure, mentions are made of ONI, The Covenant and the UNSC, though The Covenant disappear entirely past that Elite Zealot’s appearance in the first episode, and all of the other human affairs are simply spoken of in the background, with no real development. You can read appendices at your leisure using your controller/input device, which develop personalities noticeably more, especially Locke, though fans shouldn’t have to do homework to get even the basest sense of who these people are.

On a brighter point however, at the very least, Halo: Nightfall is well-produced and looks sharp, despite its limited budget, which was a strength shared with Microsoft’s previous Halo miniseries, Halo 4: Forward Unto Dawn. The concept behind the miniseries is also fantastic, even putting aside the burden of Locke’s origin. The idea of a survival story on a broken Halo ring, in a race against time to save a colony before the atmosphere fries everyone at the crack of daybreak, is excellent, especially when the shard itself looks so cool, albeit unrecognizable from Halo: Combat Evolved, constantly smoking with ash and blackened earth. 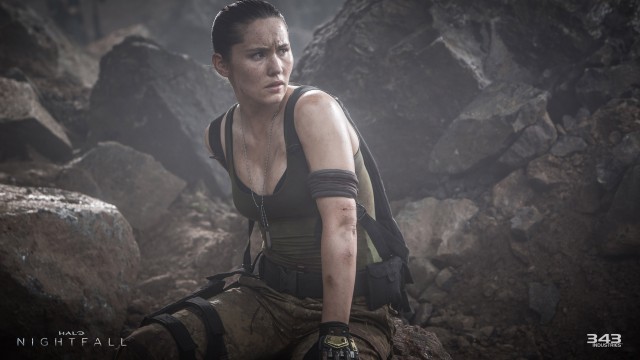 Where Halo: Nightfall trips up from here however is in failing to make all of this promising setup genuinely interesting. The miniseries quickly leans on its budget as a crutch, inventing an otherwise cool legion of smart Hunter Worms that haunt the shard, who are naturally drawn to technology, and immediately force Locke and his crew to abandon all of their neat weapons and ONI gadgets. Seriously?! Yes, I’m aware that Halo is a budget nightmare to realize in live-action, but Halo 4: Forward Unto Dawn was made for peanuts, and still incorporated plenty of recognizable Halo foes and weapons, and they still looked good enough with the limited budget. Halo: Nightfall however just has too little of a connection to recognizable Halo sensibilities, which, when paired with its bland, uninteresting cast of leads, makes for a miniseries that feels like it belongs in an entirely different franchise, especially given its penchant for melodramatic monologues and pretentious rhetoric.

The influence of Ridley Scott as executive producer is pretty apparent here on this note, with Halo: Nightfall echoing the tone and feel of 2012’s maligned Alien prequel, Prometheus. Unfortunately, this means that Halo: Nightfall also mirrors that movie’s rampant plot holes and script issues, only without the pretty window dressing that came with Prometheus’ enormous budget. I’m not certain of how much input Scott actually had, but you can tell that he had a good chunk, and that he seems to have missed the point of Halo, which is ultimately a glossy, playful franchise for the most part, not a gritty sci-fi drama. Halo is on the exact opposite end of the sci-fi spectrum as Prometheus/Alien, so maybe Ridley Scott sounded better on paper than he did in practice.

In any case, the miniseries becomes a tad more interesting when it introduces some smugglers, which are forced to make a hard living dealing in contraband and dangerous goods, with their own colony suffering under a hundred-year drought. This could have been an interesting way to explore the darker side of ONI and UNSC politics, particularly since Locke is supposed to be a character that suffered a tragic fate as a child, when the UNSC failed to save his parents from a Covenant attack. Naturally though, Halo: Nightfall fumbles this opportunity, establishing that the colony in question sure is a sucky place to live, and it’s breeding a lot of criminals, but what’s done about it in the end? Nothing. What dramatic value is gleaned from this in the end? None.

If it seems like I’m glossing over characters in this examination of Halo: Nightfall’s tedious plot, it’s because they’re all just a bunch of soldiers with paper-thin personalities, even Locke himself. Mike Colter does what he can in the lead role, but even he just isn’t given anything to do. The directing feels lazy, the dialogue feels forced, and nobody seems to be particularly invested in anything. I can’t say I blame the actors either, because their cardboard cutout characters have no personality whatsoever. Some will inevitably betray the squad to be hackneyed villains, while a superior officer with a death wish will be all too happy to give up after losing his daughter to the Covenant virus. Guess who makes the inevitable big sacrifice play to save Locke and the only other good soldier in the end? You won’t be surprised…

That’s really what Halo: Nightfall comes down to; A whole lot of nothing, even for Locke. Even the Second Stories feel dull and pointless, and only serve to hammer home information that the viewer already knows. Yes, we know, a bad package got into Sedra. Yes, we know, a virus is killing people, and it’s really a mess. Rarely, you’ll find a Second Story that actually does shed a bit more light on what’s going on, but finding these often means sifting through a lot of Second Stories that fail to establish anything of note, beyond some character whining about how bad a situation is, when the viewer is already well aware of the stakes. Unless you’re a real die-hard enthusiast of Halo lore, you might just be better off skipping these prompts when they come up during the miniseries.

In fact, who is the miniseries itself left to appeal to then? It doesn’t succeed at fleshing out the Halo universe, especially since it feels far too disconnected from Halo sensibilities. It doesn’t build any hype for Halo 5: Guardians, because by the end, we still don’t really know much about who Jameson Locke is supposed to be. It doesn’t introduce anything interesting to the Halo canon either, and while the idea of taking place on the destroyed Alpha Halo shard is a good one, nothing is ultimately done with this promising setting, at least nothing that isn’t riddled with plot holes.

All in all, Halo: Nightfall is a tedious disappointment that fails to capitalize on its potential, and only raises questions without answers, and story elements that either feel boring or questionable. It isn’t completely devoid of intrigue, and at least it has some solid atmosphere and sets, making it feel like a well-produced, but misguided dud. Halo fans will no doubt be rabidly anticipating Halo 5: Guardians regardless, but this just all the more begs the question of why Halo: Nightfall needed to exist to begin with.

Halo: Nightfall Review
Halo: Nightfall manages some atmosphere and intrigue, but its story is a mess of plot holes, its characters are devoid of depth and reason, and it fails to contribute anything worthwhile or necessary to Halo canon.
THE GOOD STUFF
THE NOT-SO-GOOD STUFF
2015-01-03
56%Overall Score
Reader Rating: (1 Vote)
100%