Brooklyn Nine-Nine is back for the New Year, and with it comes an episode that feels safe and comforting, reliably delivering on laughs, while not really pushing the envelope too much.

“Beach House” certainly wasn’t the most creative episode that the show has ever seen, but it was effective for what it was. It felt like it subscribed to sitcom tropes a little more, with the working-class leads trying to flee from the boss man, only to have the boss man tag along and ruin the fun, but for everything to be all right in the end all the same. At least Captain Holt didn’t force himself along on the, “Detectives’ only” vacation in this case, with Peralta inviting him along on the precinct’s secret getaway after feeling bad for Holt when he tells a story about being unable to, “Josh” with his colleagues back in his youth. 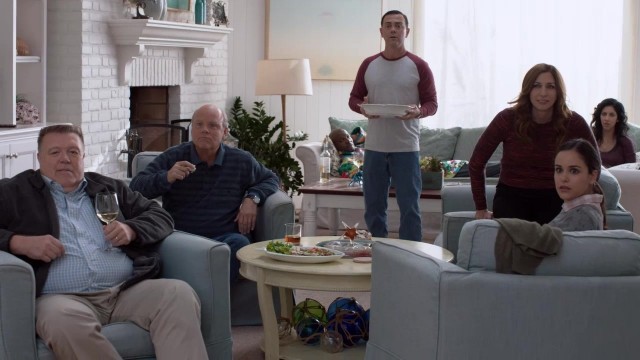 Fortunately, for its predictable sitcom-friendly outcome, “Beach House” still delivered plenty of memorable and inspired gags. Jeffords settled into a, “Vacation Terry” persona of being laid-back and at peace with everything around him, even though he’s still, “Pretty tethered” to his wife’s wishes, while Gina conspires to make Santiago have more than five drinks, to see the never-before-glimpsed, “Six-drink Amy.” The episode only had one real plot for the midseason premiere, but that’s fine, since it made for an easy time settling back in after the Winter break.

Naturally, when Holt is introduced to the party, he’s a hilariously potent buzzkill, leaving the group moaning his presence and berating Peralta for bringing their captain along. It’s kind of disappointing that Holt ultimately can’t join in the shenanigans with everybody else, not until the closing moment of the episode when Peralta has to make peace with him after he inevitably walks in on the crew trying to escape him in fact, but at least the episode closes out on a funny note with Peralta’s, “Real or fake Holt line” guessing game.

The only thing that resembled a subplot is a throwaway arc involving Diaz struggling to perpetuate her relationship with Holt’s nephew over text. Boyle trying to help her out was kind of sweet, and it was nice to see that Boyle didn’t end up making everything worse in the end, and actually contributed surprisingly helpful tips, even if they didn’t initially appear helpful. This is the most vulnerable that we’ve seen Diaz in quite a while, but it was handled with a great mix of heart and humour, especially when the pseudo-subplot ends with Diaz trying to fumble off her shirt while rushing into another room, telling Boyle, “It’s on now!”

On the note of Boyle, one of the funniest bits of the episode was seeing how excited Boyle is to get his ex-wife’s beach house for the Winter months only. Seriously, how terrible was Boyle’s attorney?!

The most odd jokes came with Scully and Hitchcock tagging along (surprisingly), and trying to find ways to talk Holt into an investment scheme. It felt a bit strange and out-of-place, even for these two, but seeing Scully and Hitchcock try to make a business pitch to a man as smart as Holt was at least amusing.

Gina also got to see, “Six-drink Amy” in the end, who just turned out to be a sad sack, which was initially a bit lame. Fortunately, we got a good moment out of the deal when Gina begrudgingly takes care of the depressed Santiago, with Santiago calling Gina on actually liking her deep-down, even if Santiago has to be drunk first. As funny as it is to see Gina full of barbed, yet comical hate towards so many things and people, it’s nice when the show picks those special moments to show her more softer side. The moment with Santiago also helped to compensate for the surprising lack of Boyle/Gina interactions this episode, especially considering the Christmas episode’s conclusion last month.

Ultimately, there isn’t much to say about, “Beach House.” It didn’t excel, but it barely had any real weaknesses either. It was all-around a satisfying return for the show, and it ended on a charming note. It also contributed some nice new character dynamics to the core group. I especially hope that this isn’t the last time that Santiago’s drinking gets the spotlight. Long live One-to-Six-Drink Amy!