Guess what. Peralta’s still a man-child. Would we have him any other way? “Payback” was all about Peralta’s aggressive immaturity, with the episode deriving its title from Peralta being revealed to owe just about everyone at the precinct an obscene amount of money. Apparently, Boyle even lent him $4,000 for an entertainment system! If you ask me, that one’s on Boyle.

In any case, one of the chief lenders is Jeffords, who has apparently called in the debt. This immediately makes Peralta suspicious (especially when this is revealed to be another four-digit debt), and it’s not long before Peralta figures out that Jeffords is having another baby. Jeffords demands that the secret be kept, and Peralta tries to do his darndest not to tell the rest of the precinct, especially with the promise by Jeffords that, if he can do so for at least four weeks, he’ll be considered to be the child’s godfather.

Of course, since Peralta has to try and deflect the detectives’ suspicion away from Jeffords, he has to work off his debt to everyone else, which includes polishing Diaz’ bike, washing Boyle’s, “Passionate” dogs, and calling the relatives of Gina to claim she died, just to see their reactions. Naturally, it was Gina that offered the funniest bit here, even if viewers couldn’t hear exactly what her grandmother was saying on the other end of the telephone.

In fact, that’s something that sort of dragged down this entire montage of gags. Despite funny moments like the calls with Gina, and a rather off-putting massage for Scully (yes, Peralta apparently borrowed money from even Scully!), the joke felt like it wasn’t taken far enough. Diaz making Peralta polish her bike felt far too tame for an $800 debt, especially considering Diaz’ aggressive personality at the best of times. True, she has become more sensitive lately, thanks to dating Holt’s nephew, which contributed to the episode’s opening joke of trying to find the perfect romantic gesture for him, which comes from a prisoner, of course. That said, she’s still Diaz, and considering her old friendship with Peralta especially, you’d think that she’d have a more cruel and unusual way to make him work off his debt, especially after she made him do a thousand push-ups overnight last season.

Regardless, Peralta, despite his smart deduction earlier, accidentally forwards an E-mail meant for his grandmother, revealing Jeffords’ secret, to the entire department, because he hit ‘Reply All’ instead of ‘Reply’. It’s a little contrived, but whatever. We knew the secret would get out somehow. Jeffords and his wife, Sharon predictably get pretty angry, but Peralta eventually makes the save with a pretty heartfelt conclusion to the arc. Peralta sells his car, which allows him to pay off the rest of his debt to Jeffords, saying that it’s the least he can do, along with demanding the department’s silence. Fortunately, Jeffords never stopped considering Peralta as a godfather, even though Peralta doesn’t seem to be aware that this implies that the baby will go to his care, should anything happen to Jeffords and his wife. At the very least, Peralta asking for help with baby books was a solid ending line.

Meanwhile, Holt and Santiago follow a subplot, which comprises yet another attempt by Santiago to bond with her captain. Following on from, “The Pontiac Bandit Returns” from December, the two continue to investigate the real perpetrator of the Brooklyn Broiler arsons, only to have Holt solve everything off-screen, which leaves Santiago disappointed. It’s a predictable plot beat, but it goes somewhere good.

Said somewhere is when Holt and Santiago hit the streets, and Santiago suggests bonding over, “Street meat”, leading to the two getting gyros, rather than Holt’s suggested ‘Nutrition Bricks’. Holt happens to get severe indigestion, leading to Santiago having to race him back to the precinct. Apparently, their perpetrator died recently, which makes the carryover’s result from December feel wasted, but that’s fine, as it leads to a funny and awkward bit with Holt bluntly stating to all three women in the department at once that he has severe diarrhea. Oh boy.

Afterward though, Holt confesses that the bonding attempt with Santiago was successful, with Santiago finally celebrating said success. It’s nice to see Santiago have a win for once, considering that she tries so hard to impress Holt, and if she consistently loses in those attempts, the joke would get old. Fortunately, the show picked a good moment to have things go better than expected. 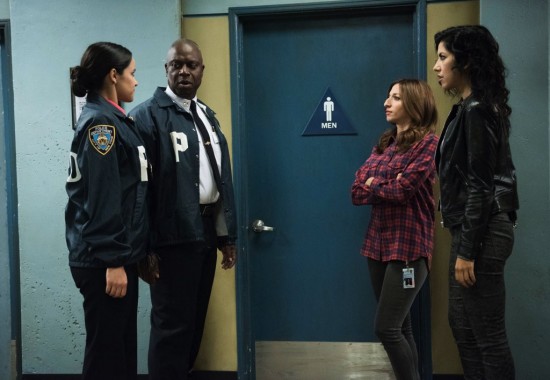 “Payback” was another reasonably fun, comfortable episode for Brooklyn Nine-Nine. It certainly doesn’t stand with Season Two’s highlight episodes, but it’s quite good for what it is. It’s also nice to have an episode that really spotlights Peralta’s shenanigans every so often, as much as we can easily love the shenanigans of the department at large.