After the very exciting wave of press that came out of The CW at the Television Critics Assocation, namely regarding the network’s champion DC Comics-inspired shows, Arrow and The Flash (both of which were confirmed for new seasons at the event), the crossover prospects of another DC series yet to come, Supergirl, which has already been ordered straight-to-series by CW co-parent, CBS, were brought up. Given that CBS co-owns The CW with DC parent, Warner Bros., DC fans and journalists were abuzz with questions about whether Kara may eventually join the DC Television Universe to fly alongside Stephen Amell’s Green Arrow and/or Grant Gustin’s Flash.

Unfortunately, when speaking at the TCA herself, CBS chairman, Nina Tassler dumped cold water on the notion, being far more pessimistic than lead producer and DC Television Universe godfather, Greg Berlanti. When asked about whether Supergirl may end up sharing a universe with Arrow and The Flash, Tassler responded, “That’s a different network, so I think we’re going to keep Supergirl to ourselves right now.” Bummer.

Granted, that’s not exactly a hard ‘no’, but it definitely puts the kibosh on Supergirl potentially crossing over sooner rather than later. It’s perhaps understandable that CBS wants to ensure that the show is a hit before they start thinking about crossovers with The CW, which is quite ambitious because it is technically a different network (although one that wouldn’t result in a conflict of interests), though it’s nonetheless a bit of a let-down that Supergirl is so far being planned by CBS to stand alone, in its own self-contained DC Universe, much like Gotham on FOX, and Constantine on NBC.

Fortunately, Tassler still spoke a bit about the series’ planned direction, claiming that she absolutely loves superhero portrayals, which she considers to be very human stories, despite themselves. She goes on to say that Supergirl is a strong, independent woman who is coming into the world in a big way, with family drama and work drama around her, which will also allow Tassler to re-live some of her favourite days working on Lois and Clark: The New Adventures of Superman in the 90’s. With the series now in the casting phase, Tassler naturally wouldn’t drop any names being considered for the lead, though she did express a desire to have, “Someone new” in the title role. 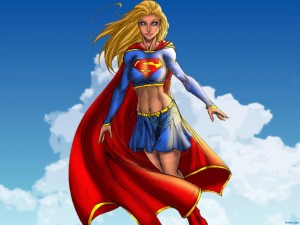 On one final note, Tassler confirmed renewals of three of CBS’s top new dramas, Scorpion, NCIS: New Orleans and Madam Secretary, which will presumably join Supergirl for the 2015/2016 season.

If you’re looking for a strong, independent female hero to join the DC Television Universe (putting aside that Arrow’s Laurel Lance is about to suit up as Black Canary), you may be a bit bummed by Supergirl so far staying in her own self-contained TV universe on CBS, but don’t despair! The CW did confirm that DC heroine, Vixen will headline her own animated series on CW Seed, which will take place in the same universe as Arrow and The Flash, potentially opening the door for Vixen to join these two shows in live-action at some point!

In the meantime, keep flying to Eggplante for all news and updates on Supergirl, and DC’s other high-profile television projects.