In its presentation this morning, Nintendo announced that the new Nintendo 3DS XL would be coming to North America on February 13th.

The console, which is not being joined by the smaller, more pocket-friendly new Nintendo 3DS, will arrive in “New Red” and “New Black” colours–no, that’s not a joke–and will launch alongside Majora’s Mask 3D and Monster Hunter 4 Ultimate.

The new handheld has a number of enhancements, including the C-stick, an analog stick-like nubbin for controlling a camera, or to function as a second control stick.

There is also new head-tracking technology that aims to maintain the 3D effect, regardless of the movement of the player’s face, a big gripe with the first 3DS models. 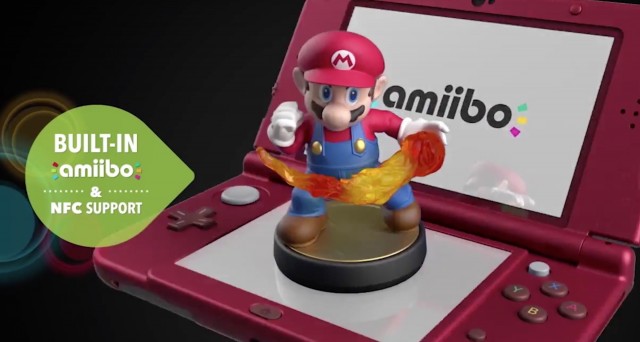 The console is also quite a bit more powerful, and while it isn’t particularly smaller, it uses micro SD cards as its news memory format to make sure the system didn’t get any bigger. Miniaturization makes a lot of sense as we progress towards smaller and smaller devices, but the 3DS game card is still pretty massive, so we’re not sure of the real impact of the move to micro SD.

Like it’s console counterpart, Wii U, the new Nintendo 3DS XL has amiibo function built-in exactly where you would expect it: under the touchscreen. Games will begin to feature amiibo technology as they roll out, and the first few to do so are Super Smash Bros. for Nintendo 3DS (via a software update) and the upcoming Code Name S.T.E.A.M. which will interface with Fire Emblem figures like Marth, Ike, and upcoming figures of Lucina and Robin.

The odd news is that the new 3DS XL will not include an AC adapter. That’s okay for early adopters who likely have one or two of them lying around from DS and 3DS consoles, but for those who don’t own a previous system, that could prove problematic, or at the very least, expensive.

We’re expecting to have a new Nintendo 3DS for review in the coming days, so stay tuned for our review!