In this morning’s Nintendo Direct presentation, the Japanese game company announced that The Legend of Zelda: Majora’s Mask 3D will be hitting the (new) Nintendo 3DS on February 13th, to coincide with the refreshed handheld’s launch.

Majora’s Mask 3DS is a remake of the smash-2000 hit for the Nintendo 64 and was announced at the tail end of 2014, to many a fan’s surprise and delight.

Alongside the game’s release, there is also a Majora’s Mask-themed console hitting North America to coincide with the launch of the game, and as per usual, it is unbelievably gorgeous.

We haven’t found out much more about the game itself since its initial unveiling in November, but on that Zelda tip, we also found out new details about Hyrule Warriors’ new downloadable content in the form of the Majora’s Mask Pack. 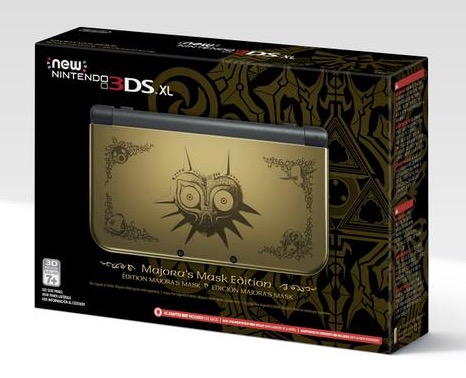