NOTE: Full spoilers for this episode of Agent Carter, including a character death, are present in this review.

Agent Carter continued strong this week, with an episode that spotlighted Peggy’s personal life all the more, while casting an increased spotlight on Jarvis, who is given a new and interesting backstory in the third episode.

Jarvis is quickly arrested by the SSR this episode, and is interrogated by Thompson after the evidence from the imploded Roxxon refinery from the first episode leads back to him. This is where we finally learn more about Howard Stark’s mysterious butler, including that he escaped a charge of treason during WWII, in relation to his wife being Jewish. Jarvis has spent most of the series coming off as a whipped, housebroken husband, so it was great to see Jarvis actually making the SSR sweat more than the other way around, proving that his sudden urge for adventure didn’t just come out of nowhere.

The partnership between Jarvis and Peggy also took on a new light this episode, with Jarvis revealing to Peggy that his treason charge came from forging a commanding officer’s signature to save his wife from the concentration camps, and that led to his dishonourable discharge from the military. Jarvis divulging this private fact was the first real indication that he trusts Peggy, just as Peggy is forced to trust him when she must send him to tip off the SSR to the location of Stark’s stolen weapons on a rather conveniently found boat at the harbour.

Of course, as much as this episode gave some awesome development to Jarvis, Peggy still stole the show herself. A nice irony was spotlighted after one of the other tenants in Peggy’s all-female quarters is evicted for violating the rule of sneaking a man past the first floor. This followed from a funny scene of the man accidentally trying to climb into Peggy’s window, only to have Peggy point a gun at him and curtly tell him, “Next one over.” The amusing contrast between the convention of the times, and Peggy obviously not fitting into them, is illustrated very well in her living space, showing in a very effective manner that Peggy is better than the time she lives in.

Of course, she still bails out Jarvis by feigning perceived female incompetence, forging a stolen car report that deflates the SSR’s evidence against the butler. Peggy sure is good at manipulating the perception of females in her workspace, though I wonder how many times she can keep playing that card before her colleagues catch on that Peggy is clearly a lot smarter than they think. Well, it got her and Jarvis out of that jam I suppose. 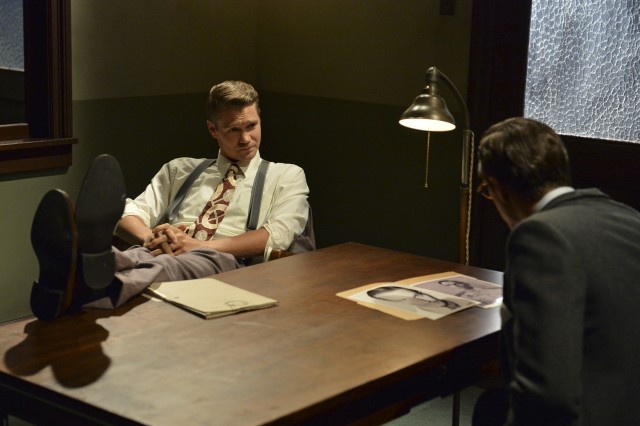 While Peggy and Jarvis ultimately found the stolen weapons pretty easily, almost too easily, they found some resistance after Peggy has to try and fight off a henchman, barely surviving after Jarvis arrives back just in the nick of time to help her take the guy out. Again, this came after another bit of nice dry humour from Hayley Atwell, who just bluntly tells the thug after thinking Jarvis had come back, “Oh, I thought you were someone else.”

Once again, Agent Carter shows itself to be an excellent blend of story, action, humour and drama. It’s also awesome to see it continuing to thrive as its own thing, not relying on its connection to Captain America as a crutch, and keeping the other connections to the Marvel Cinematic Universe pretty loose. Even so, the show still feels undeniably Marvel-esque, being smartly-executed and non-conventional, but still continuing to convey that upbeat sense of Marvel popcorn fun, even when it’s been completely devoid of superpowers, or other recognizable superhero conventions up to this point.

This episode also gave some welcome humanization to the rest of the SSR agents by the end, who have so far been portrayed as bumbling frat boys for the most part. Krzmenski has been particularly oafish, being the group idiot in many respects, and simply existing to especially highlight how chauvinistic a lot of working men were in 1946. He didn’t contribute much to the show’s dynamic beyond that.

Well, it doesn’t matter now, because by the end of the episode, Krzmenski is murdered along with the captured thug guarding Stark’s weapons by an assassin trying to tie up loose ends while Krzmenski tries to transport the goon back to the SSR, presumably the work of Leviathan. The drama over the death doesn’t totally feel earned, since Krzmenski was one of the most frequently incompetent and nasty agents at the SSR, but it at least shows that these guys aren’t heartless. They do care about their fellow agents, even Peggy, and they don’t revel in the persistent reality that any of them could be killed at any moment. Again, it’s good at showing better than most Marvel media that Peggy works in a dangerous environment, and she’s now become tangled in an even more dangerous conspiracy. 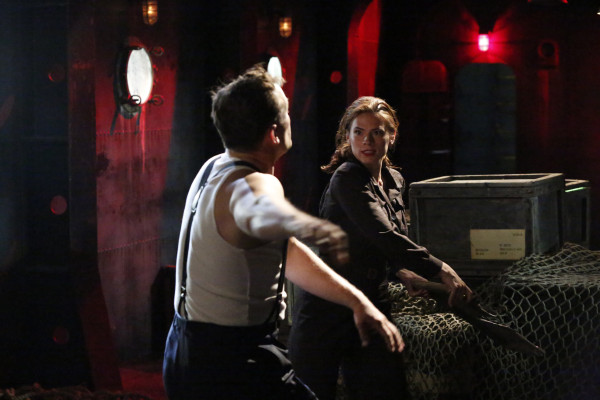 Agent Carter continues to improve with every episode for the most part, and “Time and Tide” was another great offering for this miniseries. This episode was lighter on action and heavier on story, also continuing to show Peggy’s attempts to let herself befriend Lyndsy Fonseca’s kindly waitress, and eventually appearing to fully succeed by the end. The show is also starting to more blatantly tease that Agent Sousa has a thing for Peggy, and may be the mysterious husband that Peggy apparently takes after the formation of S.H.I.E.L.D. We’ll have to wait and see though.

In any case, things are only getting more interesting in the mystery of Howard Stark. With the miniseries hitting its halfway point next episode, two weeks from now, maybe we’ll finally learn just what Leviathan is truly after.

Agent Carter Episode 3: "Time and Tide" Review
Agent Carter's third episode is heavier on story and lighter on action, but it provides some great new development for Jarvis and the SSR, while continuing to effectively spotlight Peggy's personal life too.
THE GOOD STUFF
THE NOT-SO-GOOD STUFF
2015-01-14
88%Overall Score
Reader Rating: (1 Vote)
89%