NOTE: This review may contain mild spoilers for the first season of Marco Polo, but is written to accommodate those who have not yet seen the show by avoiding discussion of major plot developments.

Netflix wishes to extend their international portfolio of appeal with their original shows. Given the notably American-directed House of Cards, BoJack Horseman and Orange is the New Black, perhaps that’s not a bad idea. Netflix appears to be aiming for more than one international audience as well, with a series that incorporates a culture clash of both European and Asian history, while still having significance to viewers in the Americas. What better subject to bring those disparate schools of history together than Marco Polo?

It’s also clear as day that Marco Polo is taking more than a few tone and style cues from HBO’s Game of Thrones series as well, complete with a ten-episode first season, mirroring the setup of Game of Thrones to boot. It’s also packed with plenty of startling violence and stirring sexuality/nudity, as with its HBO inspiration, to the point where teens and young adults with an Asian fetish especially will probably be in hog heaven here.

But for all of its admittedly well-produced spectacle, is Marco Polo actually a series worth watching in its first season? 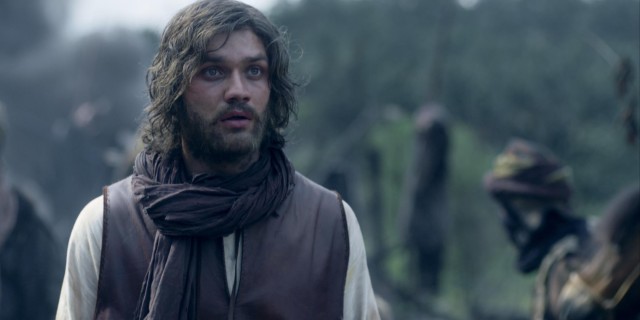 Well, it should surprise no one that the show plays pretty fast and loose with the real-life early history of Marco Polo, and his time in the court of 13th Century Mongol ruler, Kublai Khan. From the second that Polo is dropped off in Kublai Khan’s court like the world’s most disturbing adult daycare after his scoundrel father angers the Khan with his latest screw-up, Marco Polo pretty much throws the history books out of a high window. It’s not long before Polo is introduced to a world of harsh justice and what the show description describes as, “Sexual intrigue”, which is probably the most polite way to say that the show is looking for as many excuses as it can find to pack trippy shots of tits on the screen.

You may be getting the sense by now that Marco Polo is a bit easy to poke fun at. It’s just trying so hard, to the point where it’s almost cute. There’s a sort of entertaining cheese in the attempts to add in kung-fu showdowns and supernatural monks where they obviously don’t fit, yet at the same time demand that the show is taken as a credible tour through a real-life period of history. Somehow, I don’t think Marco Polo had any run-ins with magical assassins in the real-life 13th Century, or had an ill-advised love affair with a princess that is as much prisoner to the Khan as he is.

But that fun stuff starts coming in at about the halfway point of Season One, which, I admit, is a bit dull in the early episodes. Some of the show’s more negative reviews appear to have come from the fact that the press was initially only screened six of the ten episodes (hence why I waited for the actual show to launch before my own review), strangely leaving the show’s best elements out of press screenings. Right from the get-go, Marco Polo does succeed on the virtue of its strong production values, having outstanding wardrobe, set and choreography design that effortlessly immerses you into the 13th Century, but it’s not until the intrigue actually goes somewhere in the second half that viewers will feel appropriately engaged.

One of the main issues with the show so far is Polo himself, who is a boring, overly passive and cliched ‘fist out of water’ protagonist that just isn’t interesting to learn about at this point. The real-life Marco Polo was a very intriguing figure, particularly with his controversial documentation of his adventures to unknown lands, but you’d never know it from this show, since the guy is a total snore here. Polo is played by Italian actor, Lorenzo Richelmy, who begins the series half-asleep, and just doesn’t feel like he’s any more engaged with his character than the audience is at this point.

Fortunately, the supporting cast picks up the slack, and when the later episodes add more intrigue to them, the show really gets better for it. Full-on war eventually ignites between Kublai Khan and the Chinese Song Dynasty, the one part of the Khan’s massive dominion that defies his rule at this point, and it’s there that we see the agendas of various supporting characters begin to come together. We see Polo himself have to make more challenging and riveting decisions. We see people who aren’t who they say they are. We see the good and the bad of Kublai Khan’s policy of allowing all religions and people into his kingdom. We see the machinations of the season’s main villain, Chinese Chancellor, Jia Sidao, played by Chin Han. We see assassination plots. We see real intrigue, which makes up for having to slog through the complete lack of intrigue that our hero contributes to start.

Fortunately, even during the weaker earlier episodes, we have some standout supporting characters in Benedict Wong’s Kublai Khan, and Olivia Cheng as Sidao’s consort sister, Mei Lin, who has her own complicated agenda throughout the first season. Initially just a frowning face, Wong eventually manages to turn his initially ruthless Khan into a genuinely sympathetic tyrant, who accepts and moulds Polo as a means to deal with his grief over apparently disappointing his father and grandfather. Likewise, Mei Lin offers the sexy shot in the arm that the show needs more often than not, balancing being a concerned mother with being a certified badass.

Also exemplary is Tom Wu’s Hundred Eyes, a blind monk that feels like he belongs in a completely different show, but is nonetheless great fun to watch. Hundred Eyes’ ability to clobber just about anyone that challenges him initially makes him seem overly supernatural, but in the seventh and tenth episodes especially, he lends himself to some truly fantastic action choreography. Hundred Eyes even fights Polo’s big climactic battle for him at the end of the season, which is initially kind of lame, but it’s difficult to care for long when Hundred Eyes makes the fight so fun to watch, however outlandish it actually is.

The action isn’t just limited to vaguely silly kung-fu bouts though. Plenty of military battles and close-quarters swordfights also unfold throughout this first season at random intervals, which incorporate all sorts of giddy flesh-flaying and soldier-skewering. Marco Polo is not shy with its often squeamish violence, often having people maimed, clubbed and impaled in all sorts of horrible ways. It really does everything in its power to earn its TV-MA rating, so if you find that you’d rather your historical dramas be clean-cut, this show probably isn’t for you. 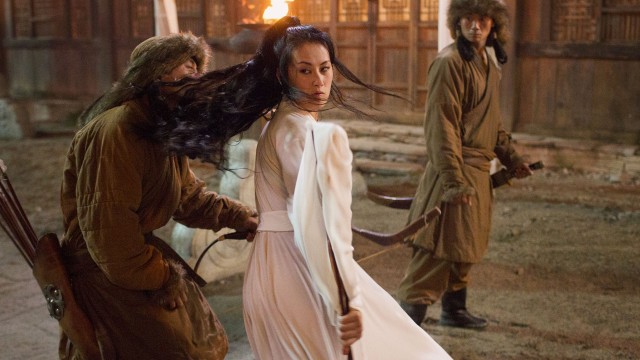 Of course, even if you don’t mind the wanton violence, the convoluted storylines are another problem. Marco Polo often bombards the viewer with a lot of information, and a handful of smash cuts between locations, which occasionally makes the storytelling feel a bit confused. The strict ten-episode format doesn’t really help either, since it feels like some crucial developments are rushed through, or shoved aside in favour of trite, hackneyed dialogue that will probably have impatient viewers zoning out for minutes at a time. As I said, it’s not until the second half of the first season that the show really feels like it has real stakes, with the previous skirmishes and debates all just feeling like so much window dressing for a flimsy script with no real substance.

Eventually, Marco Polo does find its footing, but one must ask themselves how patient they are with their Netflix Originals and their time. If you’re a fan of violent and sexual historical dramas, Marco Polo does eventually become good enough to enjoy in Season One, but it stumbles pretty noticeably in its early episodes, which are more of an overwrought snore than they should be most of the time.

Considering that the show is blatantly trying to court the Game of Thrones fanbase as well, albeit sans fantasy elements in this case (unless you count Hundred Eyes’ inexplicable ability to kick everyone’s ass), Marco Polo feels a bit trite in comparison. Game of Thrones is definitely better at being edgy and clever with its equally violent and steamy content, whereas Marco Polo feels like it only has base knowledge of what makes Game of Thrones popular, making it feel like it came to the battle for your viewership with only a toy sword in contrast to Game of Thrones‘ steel claymore.

For all of its efforts to replicate the political back-stabbing and shocking barbarism of Game of Thrones, Marco Polo is only mildly successful in its first season. Taken on its own merits, it’s passable history-based fanfiction with just enough appealing content to get by, but definitely not the best of its ilk, especially considering its woeful dependence on genre cliches. The journey’s destination is definitely better than its outset, but with time being precious for Netflix watchers, one has to ask oneself if said journey is worth undertaking.

If you feel like you would be interested in Marco Polo, and don’t mind the fact that it really doesn’t care about basis in actual history, then it’s worth watching and sticking with, especially comprising only ten hour-long episodes. If you could care less, then there are probably better action/drama shows that are more worth your time, especially if you haven’t yet climbed onto the Game of Thrones bandwagon, which essentially gives you a non-Asian version of this, but better, plus fantasy elements.

With that said, Marco Polo’s production values shouldn’t be instantly dismissed, and its renewal for a second season doesn’t make me unhappy, personally. As with BoJack Horseman, another Netflix Original Series, this is a show that doesn’t perfectly come together in its first season, but with the right audience feedback, it could definitely get better for the second, especially if it decides to take itself a little less seriously.

Because God knows that any self-respecting viewer can’t watch a real historical figure get high and climb through kaleidoscopic shots of naked women before seeking the counsel of a wise old man, and think that this show deserves to be taken seriously.