Constantine returned from the stirring Winter break cliffhanger, with a brilliant follow-up that makes the show feel like it’s coming together more than ever. This hopefully means that the chances of a renewal for Season Two have improved, since it would really be a shame for NBC to cancel a show that is really starting to become a superb supernatural drama.

Be that as it may, “The Saint of Last Resorts: Part 2” immediately follows from the midseason finale, with Constantine being shot and left for dead by Anne-Marie, and staring down a nasty demon. Desperate, Constantine enacts a demon summoning ritual to cast the especially powerful demon, Pazuzu into his own body, which saves his life, but also leaves him battling with the imminent doom of being consumed from the inside-out by a very powerful demon. 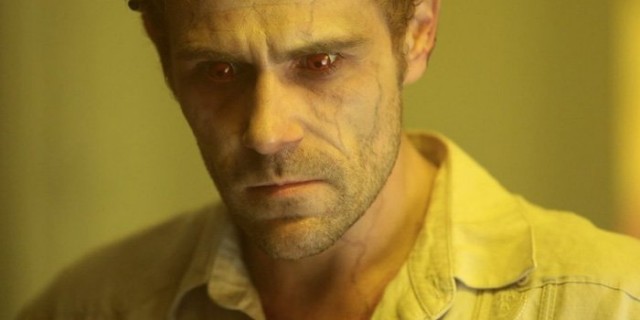 This arc of trying to save Constantine from his possession comprised the entire episode, but it was a great way to kick off the show again in 2015. Matt Ryan has never performed better than the especially visceral, violent portrayal that he’s had to deliver here, without compromising Constantine’s edgy charm at the same time. The episode also had a sharp idea with Anne-Marie struggling with her guilt, not just from the base act of shooting Constantine in the sewer, but for having to shoot him in the sewer because she was the person who introduced him to the occult world in the first place.

As for Zed, who was also left in an especially hair-raising situation after some bad people working for her mysterious family snatched her out of Constantine’s lair, she doesn’t waste much time breaking out of captivity. The teases of Zed’s family are very promising, and yet another thing that makes the show feel like five episodes isn’t enough to wrap it all up. In any case, if you’re familiar with the Hellblazer comics, you may have some idea of who Zed’s family is already, so if they properly show up on the show, it will be interesting to see exactly how similar or differently they’ll be portrayed.

Anyhow, after subduing her attacker and escaping the van transporting her, Zed high-tails it back to Chas, with the both of them confronting Anne-Marie after they learn that Constantine survived. The three are forced to team up however when Constantine blacks out, and goes on a merry murder spree amidst some violent gang members, courtesy of his new demon host, placing him in the slammer. It’s here that Constantine must try and seek the aid of prison merchant, Julio, played in a guest role by Napoleon Dynamite’s Efren Ramirez, who initially tries to betray him to the gang that Constantine killed his way through on the outside, before the attackers end up equally dead, leaving Constantine to take over the prison under a cloud of terror.

With a combination of resourcefulness, fisticuffs and a few naked holograms (don’t ask), the group manages to reunite with Constantine and find the means to try and exorcise him. This culminates in a wonderfully intense exorcism scene, where Anne-Marie becomes the only hope to save Constantine, and must directly face her fear and guilt as a, “Novice” of the church. With Pazuzu taking hold of Constantine and calling upon the demons of all three people, a long and tense spiritual struggle takes place, before Constantine is exorcised, and all is well again, with Anne-Marie returning to her church, and Chas and Zed joining the fight against the Rising Darkness with renewed conviction.

In a way, it’s somewhat shocking that the show would liberate Constantine of Pazuzu so easily, but at least it has the status quo restored for what are hopefully some good developments for Season One’s back half. The episode attempted to have another villain of sorts, with the Serpent of Eden possessing some prisonfolk, but honestly, as cool as he looked, the show probably shouldn’t have bothered with him. He’s dispatched way too easily (though he’s clearly not permanently defeated), and is basically just a convenient excuse to get rid of the convenient magical artifact that would instantly remove the demon at the cost of Constantine’s life. It’s understandable, since we wouldn’t have a show without the snarky bastard. 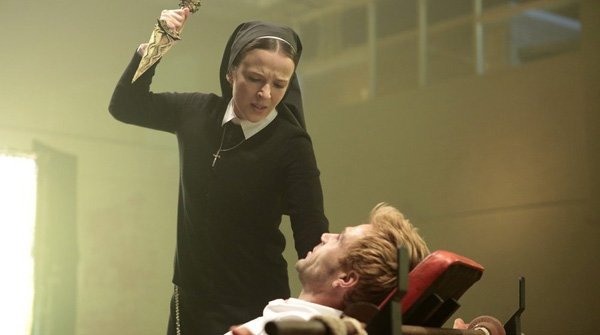 “The Saint of Last Resorts: Part 2” capped off the impressive midseason finale with an equally impressive midseason premiere, and is continued proof that the show is really getting better with every episode at this point. It would be a real shame if NBC dropped it after the planned five remaining episodes, since this episode delivers yet more great promise for things to come, while also being a dramatic and highly effective story on its own. If Heaven truly is on Constantine’s side, he should live to keep fighting for next season!