NOTE: Full spoilers for this episode of Gotham, including a character death, are present in this review.

Gotham restored the status quo a little more this week, somewhat to mixed effect. Carrying over from the midseason premiere two weeks ago, “Rogues’ Gallery”, “What the Little Bird Told Him” has Jack Gruber, now officially confirmed as Gotham’s rendition of minor Batman foe, Lester Buchinsky/Electrocutioner, on the loose in Gotham City alongside his associate, Aaron Helzinger/Amygdala. Meanwhile, Fish Mooney is finally making her move on Don Falcone, and Gordon desperately tries to restore his reputation and position with the GCPD.

I knew that Gordon’s time as a security guard for Arkham Asylum would be short, but I had no idea that the arc would be swept under the rug this quickly. From the second that Gordon talks Police Commissioner Loeb into letting him arrest Buchinsky and Helzinger, putting Bullock’s career on the line in the process (go figure), you know that he’s obviously going to get his man. It takes a bit of the suspense out of the episode when the outcome is so predictable, even if the journey there is reasonably entertaining, if you can forgive the rampant story issues.

Yet again however, Gordon’s latest case felt like it was firmly overshadowed by the mob. After it’s revealed that Buchinsky was a former bank robber that Don Maroni screwed over back in the day, it’s not long before Buchinsky begins trying to mess up Maroni’s operation. This is where the character runs into problems however, since his electrical appartus seems to arbitrarily kill and spare its victims as the plot demands, which really feels like lazy writing. It’s especially lazy when a delirious Penguin suddenly jumps upright in a hospital van after surviving Buchinsky’s attack to declare that he has urgent business with Falcone, before just passing out again, with Don Maroni conveniently within earshot. Of course.

Tragically, “What the Little Bird Told Him” is often punctuated with standout moments, even for Gordon. It’s just a shame that so much of this episode’s script is full of contrived moments like Penguin’s random shock therapy-fueled outburst. Gotham can be a fantastic show at its best, but this unfortunately serves to highlight the debut season’s problem with flimsy scripts in the weaker episodes yet again.

Similarly, the plot has to strain to finally get Fish in a position to move on Falcone. Initially, it seems like Fish gets the upper hand, but her reasoning of trying to force Falcone out because he’s old and out-of-touch as a move of compassion just feels dumb. Fish has displayed nothing but unsubtle hatred towards Falcone throughout the entire series up to this point. Not only that, but she’s not a woman who makes excuses for her often ruthless actions. Her behaviour regarding trying to oust Falcone was very out-of-character, and quite distracting, just as Falcone initially looking like he was going to capitulate and leave the city with Liza equally made no sense, given his actions and demeanour in previous episodes.

At least the result of this plot was very nicely intense, with Penguin getting to triumphantly stare down Fish with a cocky eye after Falcone’s goons massacre all of Fish’s bodyguards, leaving Fish and Butch to be escorted away to an uncertain fate. Since Fish and Butch are still alive, I doubt they’ll be sent to their deaths here. It will be interesting to see where they go next, since they’re nonetheless placed in a position that they likely won’t be able to get out of very easily.

The real great moment here came from Falcone apologizing to Liza for getting mixed up in mob affairs after Penguin rats her out as Fish’s spy, with Falcone then strangling her to death right in front of Fish and everyone else. This was a fantastic and chilling moment that really deserved to be in a better episode, especially since the attraction between Falcone and Liza seemed to be truly genuine, particularly with Falcone trying to urge her to find a normal life and a nice husband not two or so scenes before. It really was a tragic end for Liza, and paves the way for more interesting developments to come, now that Fish’s honey trap is clearly a bust.

As for Buchinsky, he and Helzinger use their magical Electrocutioner gear that miraculously knocks out every cop in the building, after Maroni is hidden in the GCPD building, save for Gordon, who had the foresight to wear the tacky rubber boots that Edward Nygma recommended for him. Of course. In all fairness, the following moment is pretty awesome for Gordon, who manages to subdue Helzinger before disabling Buchinsky’s Electrocutioner gear with little more than throwing a nearby drink on it. Admittedly, that’s pretty funny, and it’s a design flaw that Buchinsky presumably sorts out by the time Batman is prowling Gotham City many years from the show’s events.

Thus, Gordon is reinstated on the GCPD right away, and even begins a romantic affiliation with Dr. Thompkins, who takes a liking to Gordon for… reasons. Also, Barbara flees to her parents’ house, but really, does anyone care about Barbara anymore? 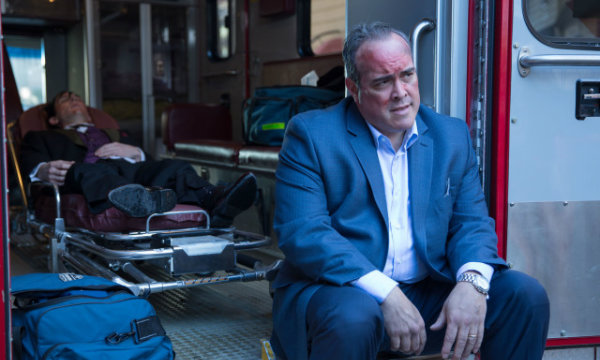 “What the Little Bird Told Him” had some good moments that were wrapped in a shaky and underwhelming script. The concept of the episode was sound, but the finer points ultimately dragged it down into being another disappointing offering for the show. What happened to the superb brilliance of “Penguin’s Umbrella” or “Spirit of the Goat”? Even the midseason finale, “LoveCraft” was pretty good for the most part. Gotham is hitting a lot of ups and downs in Season One, but since the show returned for 2015, it’s been in a slump.

Hopefully Gordon’s return to the GCPD, and Fish’s machinations being exposed and stopped will lead to a better return to form next week.