Arrow’s shocking midseason finale, “The Climb” ended with the apparent death of Oliver Queen, leaving Starling City without The Arrow to protect it, and most importantly, leaving Diggle, Roy and Felicity stranded without a leader, hence, the midseason premiere’s title, “Left Behind.”

Arrow has walked on a lot of shaky ground since the excellent first couple of episodes in Season Three, having trouble finding its footing for most of the season, which has resulted in a general sense of uneven quality. Fortunately, “The Climb” was a strong step in the right direction, and “Left Behind” continues to build on that episode’s excellent sense of shock and drama, showing the fallout of Oliver’s fool’s errand, challenging Ra’s Al Ghul to a battle that, in hindsight, he was bound to lose.

Left to pick up the pieces and fearing the worst, “Left Behind” gave the show’s supporting cast a wonderful chance to shine. After Malcolm Merlyn delivers the evidence that Oliver has died, which Felicity tests and confirms the accuracy of, the group reacts in varying ways. Felicity falls apart and suffers a breakdown that leads to a complete lack of conviction toward protecting Starling City, while Diggle simply becomes confused and unsure of his next move, and Roy believes that it’s his duty to keep fighting for the good of the city as Arsenal, even without Oliver to guide him.

Felicity’s feelings were particularly spotlighted in this episode, given that fans are well aware at this point that she’s been in love with Oliver for quite a while. Her line to Ray about being 25 and already losing two of her closest friends (also referencing the death of Sara Lance at the start of the season), was a powerful one, especially following a scene where Felicity berates Ray for risking his life with the A.T.O.M. project under the false pretenses that it would somehow validate the death of his fiancee.

On the note of Ray, this episode showed the character in a more serious light due to the heavy drama surrounding the story, and yes, we do get to see him test his A.T.O.M. equipment for the first time. It’s little more than a fleeting tease, since the equipment naturally malfunctions, and Felicity being distraught means that it won’t be worked out for a while yet. This is unsurprising after news recently got out that Ray and Felicity will appear on The Flash later in the Spring, with S.T.A.R. Labs assisting in the development of Ray’s A.T.O.M. gear during that episode. 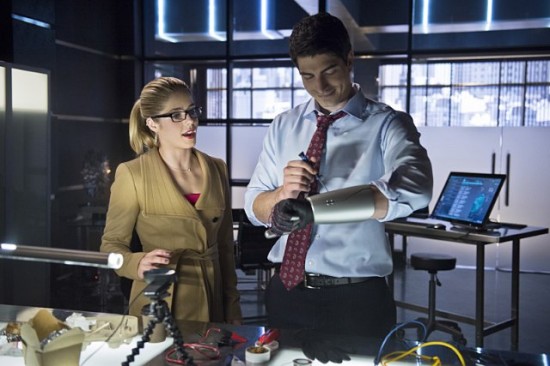 Laurel also continues a nice push forward in terms of character development in the midseason premiere, and gets a villain that is much better tied to her character arc in this episode. It turns out that someone has been hoarding stolen evidence from the D.A.’s office, which has allowed various street enforcers to get out of charges easily. That someone is Danny Brickwell, a.k.a. recurring Green Arrow antagonist, Brick from DC Comics, played in a superb guest role by Vinnie Jones. While it’s not outright stated, this Brick does indeed appear to have impenetrable skin, just as with his comic book counterpart, as he’s shot and stabbed more than once this episode, yet seems to be unaffected on all counts. Brick’s arc will be explored across the next several episodes for his debut on Arrow, but already, the show has done something very cool with him.

The combined news of Brick’s plans to take over The Glades and Laurel learning of Oliver’s apparent death also leads to Laurel suiting up as DC heroine, Black Canary for the first time, at long last. This was the one let-down though, in what was otherwise a very strong episode, since we barely see Laurel in her Black Canary gear for more than about ten seconds towards the very end, and the only thing she says is a cheesy line that feels forced. At least Katie Cassidy looks the part, and it’s especially cool to see her wielding Sara’s sonic-powered Canary Cry devices too. 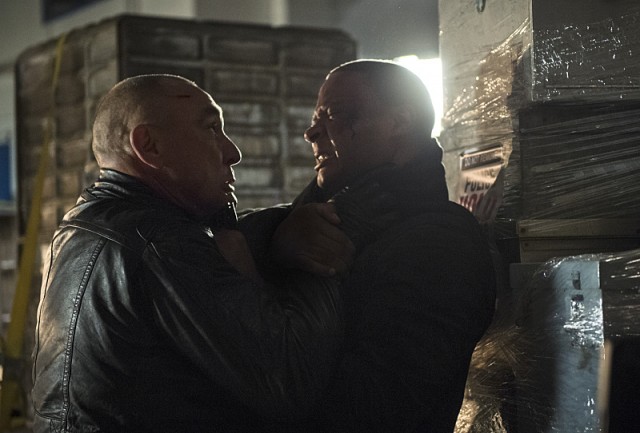 Even with Oliver apparently being dead though, Stephen Amell still factored into the episode. As expected, Oliver still showed up in flashbacks in Hong Kong, doing more dirty work with Maseo for Amanda Waller, who is none too pleased about the two capturing and torturing someone without her orders. After an apparently botched mission, Oliver manages to tag one of China White’s goons, whom he appears to let escape, only to later reveal to Maseo that he let the guy get away on purpose, so that he could put a bug on him, and have him lead the two men back to Maseo’s missing wife. Maseo responds that he hopes to one day repay the debt.

And repay it he does. The mysterious rescuer of Oliver’s limp body from the previews of this episode is indeed revealed to be Maseo, who is forced to drag him through the snow and take him to a hidden cabin, which is apparently owned by… Tatsu! This reveals that Tatsu survived whatever is going on in the flashbacks, though apparently divorced (or at least separated from) Maseo, after he joined the League of Assassins. Not only that, but the couple’s son is nowhere to be found. Could something terrible have happened to the boy back in Hong Kong that started the separation of these two, and Maseo’s motivation to join the League? I suppose time will tell.

Tatsu does manage to bring Oliver back to life however, somehow, and without incorporating the Lazarus Pit that fans speculated would bring the character back leading up to this midseason premiere. Maseo confirms that Oliver died, and it’s anyone’s guess as to what happens next, but that will just make fans all the more eager to tune in next week.

“Left Behind” felt like a fresh and very emotionally engaging return for Arrow in 2015. The show is hitting the ground running in the New Year with all sorts of exciting developments set up here, even if Oliver’s ‘death’ was clearly not going to last long, given that he’s the star of the series. It will be interesting to have even more blanks filled in before Oliver makes his official return to Starling City, but I’m just happy to see Arrow starting 2015 off right, after struggling during most of the latter part of 2014.

Arrow 3.10: "Left Behind" Review
Arrow started 2015 very well with a strong and dramatically engaging episode that wonderfully spotlights the show's supporting cast, and lays out many exciting developments for the New Year.
THE GOOD STUFF
THE NOT-SO-GOOD STUFF
2015-01-22
90%Overall Score
Reader Rating: (1 Vote)
90%