After starting things off on a more modest note with “William Henry Harrison” during the previous half-hour, Parks and Recreation immediately went into one of the series’ best episodes over its entire run with “Leslie and Ron”, making for an excellent payoff to the previous episode’s events.

Immediately picking up where “William Henry Harrison” left off, “Leslie and Ron” had its title characters trapped in the old Parks office together, and forced to try and repair their friendship before they could be let out. The result of this episode was not only hilarious, but also surprisingly emotional, particularly for the show’s avid fans. This episode does a superb job of displaying how ridiculous the idea of Leslie and Ron being colleagues actually is, but nonetheless ties it up in a brilliant way, revealing that Ron is fully aware that Leslie would drive him insane from his recommendation letter, but demands that the Parks Office hire her anyway. 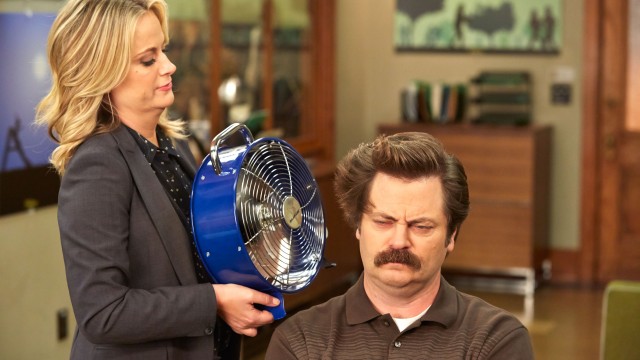 The entire episode pretty much revolved around Leslie and Ron in this room, but that kept the story tight, focused and immensely satisfying. The episode essentially provided a guided tour of the two characters’ connection, and filled in some welcome blanks regarding what drove them apart between the events of Season Six and Season Seven, namely what ‘Morningstar’ actually is.

As much as it would have been funny enough to have ‘Morningstar’ and the feud be over something petty and ridiculous, the final result was actually far superior. It turns out that after Leslie took Terry away, then April/Andy, and then Donna and Tom left the Parks Department to pursue their own ventures, Ron simply didn’t recognize anyone in his office anymore. The real reason for him visiting Leslie after going regional, something that was teased previously, was so that Ron could ask for a job in Leslie’s office, despite detesting the idea of working for the federal government.

This was very poignant and shocking, but also fitting. Ron is a character that constantly plays his true thoughts and emotions close to his vest, and that’s been a large source of the humour behind the character throughout the show’s run, but the flip side of that is that you don’t always know what’s really going on with him. While that can be funny, it’s comforting to see that Ron still has feelings like a normal person, and is more attached to his colleagues than he’d care to admit. It’s also satisfying to see that he values his co-workers, and especially Leslie, enough to betray everything that he believes in, just so he can be close to them. 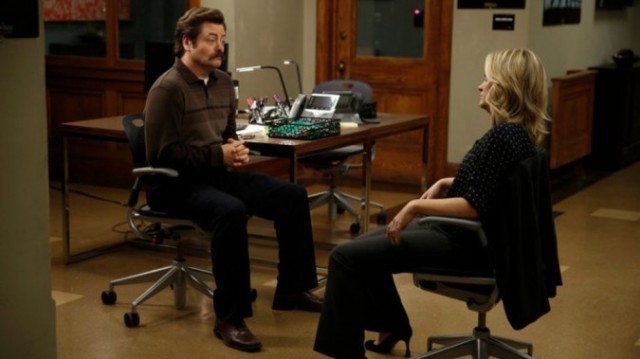 Ron’s decision to start a woodworking firm was due to his belief that his time in government was simply up, and Morningstar was an attempt to design a building that built over the park that Leslie originally promised Ann at the start of the show, which included bulldozing Ann’s old house. This makes sense in terms of provoking Leslie, and leading to the feud between the two, which was further fueled by Ron believing that Leslie and his other friends had simply abandoned him for greater ventures.

It was very fulfilling to see that the show ultimately didn’t make either character the villain in this situation. Both characters had real, legitimate concerns, and both had regrets as a result of those concerns. The two making up felt earned and satisfying, which also led to the rest of the group re-discovering them horsing around, complete with Ron’s saxophone. It was a funny moment on its own, but it also provided excellent assurance that all is well again, especially with the Leslie/Ron conflict starting to run out of places to go as of the previous episode.

As heartwarming as the episode was though, the jokes were just as superb. The best of them was easily Ron trying to blow a hole out of the room with his partially disarmed Claymore mine, which he’s had on his desk throughout the entire series, only to have it revealed that the mine was actually a gift from Leslie, and it contained confetti, along with a goofy balloon with a voice celebrating Ron’s fifth anniversary as Parks Director. This, again, succeeded at being both emotional and funny, especially since it finally explained what the deal was with that land mine after all this time.

Also finally explained is why Ron hired Leslie in the first place, even though he blatantly hates government, and Leslie stands exactly against Ron’s wild man, strangely patriotic and yet wholly anti-government values. Hearing Ron finally admit aloud that it was Leslie throwing a tantrum after Ron tells her in the interview that her values are nonsense that motivated him to hire her, saying that he’d rather work with someone that had Leslie’s convictions and idealism than a, “Milk toast yes man”, felt fitting, especially when Ron tried to mask the moment by claiming it was because she made good brownies. 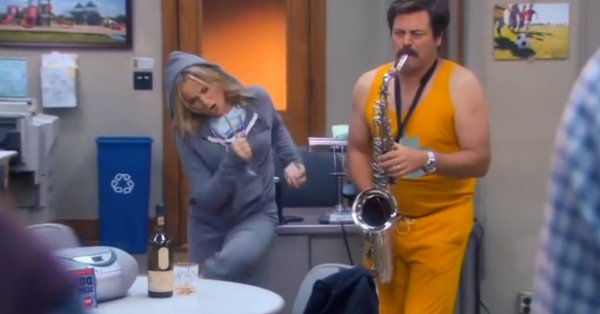 Naturally, Amy Poehler and Nick Offerman delivered some of the best performances that they’ve had throughout this entire series here as well. Their characters were at their most touching here, while still not betraying the core appeal of either personality. It’s probably the best material that Poehler and Offerman will share for this series.

“Leslie and Ron” is the kind of excellent episode that all final seasons of any TV comedy should have at least one of. It’s Parks and Recreation at its best, and it does an excellent job of showcasing exactly what is great about both of these title characters, and how they have worked together for so many years, against all odds. It’s a big heartfelt thank you to longtime fans of Leslie’s and Ron’s characters, and it certainly doesn’t forget the top-quality humour that we’ve come to expect from this show in the process!

Parks and Recreation 7.4: "Leslie and Ron" Review
"Leslie and Ron" provided an outstanding and highly emotional episode for longtime fans especially, having its title characters patch things up, and answer the lingering questions of just how they've been colleagues for so many years.
THE GOOD STUFF
2015-01-22
97%Overall Score
Reader Rating: (3 Votes)
98%