NOTE: This review may contain mild spoilers for the duration of, “Wet Hot American Summer: Ten Years Later.” That said, the review is written to accommodate those who have not yet watched the miniseries, and as such, will avoid discussion of major plot developments.

One of the more surprising and satisfying revival efforts to hit Netflix’s original television catalogue over the past several years was Wet Hot American Summer: First Day of Camp, a follow-up miniseries to 2001 cult comedy movie, Wet Hot American Summer. Despite Wet Hot American Summer faring poorly at the theatrical box office and not really garnering much interest or approval from critics, the movie went on to become a highly beloved cult hit, and the same was true of its prequel miniseries, First Day of Camp, which humourously brought back the original lead cast as the same characters they portrayed before, acting as if they hadn’t aged a day in almost fifteen years of real-world time.

That pretense has now been dropped however, if only slightly, in Netflix’s new follow-up miniseries, Wet Hot American Summer: Ten Years Later, which still has the fortysomething-to-fiftysomething lead actors portraying characters that they should be far too old to play, only now they’re at least adult twentysomethings, rather than teenagers. With Wet Hot American Summer: First Day of Camp proving to be a well-received success when it premiered on Netflix a couple of years ago, Ten Years Later seems like it was made to further poke fun at digging up such an old, unexpected movie property, especially in regards to the modern trend of making long overdue nostalgic sequels in the movie space, which almost always try to bring back their former actors, regardless of how much they’ve aged.

Thus, the usual satirical edge is all over Ten Years Later, which shifts the humour into the 90’s setting with a similar flavour, though one that also provides a more retrospective look at childhood, seen through the eyes of adults who have entered the real world, and thus stopped believing in magic and innocence. To this new miniseries’ credit, it also manages to continue recapturing that same sense of quirky, silly charm that the previous two Wet Hot American Summer offerings also did very well. Even then though, it’s tough to deny that the humour and parody elements are more uneven than they were in the previous two trips to Camp Firewood, and by the end, it seems like these revivals have hit a truly definitive end point, which seems to indicate that there’s not really anywhere else that Wet Hot American Summer could feasibly go from here.

If there’s another bright spot for fans in Ten Years Later though, it’s the fact that almost all of the lead actors from both the original Wet Hot American Summer and First Day of Camp return yet again for Ten Years Later. The only exception is Bradley Cooper, who couldn’t get around his inevitable scheduling conflicts this time, leading to Ben now being portrayed by Parks & Recreation’s Adam Scott, humourously worried that no one at the Camp Firewood reunion will recognize him because of his, “Nose job.” Beyond Cooper though, most of the other actors seem to return in some capacity, even if it’s in a smaller part. Several great new faces are also added to the cast this season, between Alyssa Milano as Ben’s and McKinley’s outwardly perfect new nanny, Renata, Jai Courtney as Susie’s new actor love interest, Garth, and Santa Clarita Diet’s Skyler Gisondo as a new rival to Paul Rudd’s Andy named Deegs, among others. Michael Ian Black, Michael Showalter and David Wain also do double duty, portraying fictionalized takes on U.S. Presidents, George H.W. Bush, Ronald Reagan and Bill Clinton, respectively, along with their established Camp Firewood personalities. 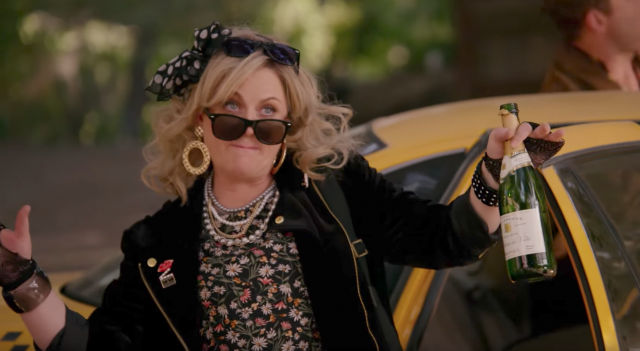 Since the lead cast are supposed to be older, the satirical emphasis on sex comedies that founded the original Wet Hot American Summer especially has now given way to a satire of political dramas, family dramas and other such ‘serious’ adult media. This can sometimes be a funny way to keep things fresh and interesting for Camp Firewood, though it’s also a bit less effective and reliable than the teen-oriented sex comedy satire that came before, since the jokes don’t land with the same consistency anymore. The writing is nonetheless very clever though, and the way that everything comes together in such an insane, yet sweet-natured resolution, also feels very true to the spirit of Wet Hot American Summer, more so than some of the previous episodes of this miniseries do. It’s not quite at the level of this ‘franchise’ of sorts feeling tired, but it might hit that point if Netflix green-lights any more of these miniseries follow-ups to the original cult movie.

As you can imagine as well, I can’t talk about many of the finer details regarding what exactly unfolds during Ten Years Later, since the latest surprises at Camp Firewood remain a huge part of the fun, but I can at least speak in broad terms to address the fact that lingering issues from the first two chapters in the Camp Firewood ‘saga’ do get firmly addressed in many instances here. The fallout from things like Lindsay pursuing her dream job as a journalist, Ben and McKinley getting married and adopting a child, Katie trying to move past her former romantic missteps, Beth trying to determine whether she should move on from the camp, and Andy struggling with the fact that he piqued at camp most notably, all come to the forefront and find definitive ends in this miniseries, among other conflicts. For the most part, these characters all reach fitting resolutions too, with Ten Years Later seemingly existing with the intent to wrap up some of the plot threads that were still left hanging in the wake of the original movie and First Day at Camp.

With that said however, it’s also difficult to deny that there’s a few missed opportunities here and there. Some characters feel like they have too little screentime, with Joe Lo Truglio’s Neil literally sleeping through the first several episodes, only to then pursue a new love interest in what’s mostly a filler storyline. Likewise, it feels like Amy Poehler’s Susie doesn’t quite get enough story development to make her struggles with Garth or theatrical rival, Logan really stand out. Not only that, but the fact that the miniseries fails to pair Poehler with Adam Scott at all, especially since Ben and Susie ran the drama club together beforehand, is a massive missed opportunity, specifically since Poehler and Scott were an on-screen couple in Parks & Recreation!

Finally, and most conspicuously, Christopher Meloni’s Gene gets a fairly fun subplot that humourously retcons several of the twist conclusions from First Day at Camp, but his character conflict gets completely switched around. Rather than being a shell-shocked weirdo learning to embrace his strangeness, Gene is instead suddenly made into this action hero parody that might as well have been a completely new character to some extent. Gene is still funny, but this shift basically means that Gene’s own struggles from the former Camp Firewood chapters essentially get pushed aside, in favour of an entirely new resolution that doesn’t totally fit, other than leading into the reliably absurd climax to these new eight episodes.

Even if Ten Years Later goes down as the weakest of the three Wet Hot American Summer offerings though, it’s still a good slice of funny, silly mischief, and if you’ve always loved Wet Hot American Summer especially, you’ll certainly have a lot of fun with this new miniseries. The laughs may not be as frequent or consistent here, but they still come at a solid enough rate to make this miniseries worth the quick eight-episode binge for fans, especially since some of the plotting is a bit more focused in contrast to First Day at Camp, even if the humour isn’t quite as universally strong in this case.

Like I said though, the best thing about Ten Years Later is that it’s a fitting end point to the Camp Firewood saga, something that fans will likely feel quite satisfied by in that respect. As with First Day at Camp, Ten Years Later does considerably depend on its viewers already being established fans of Wet Hot American Summer to get the most out of it as well. If you’re a curious newcomer, it’s probably better if you watch First Day at Camp to start, and then move on to Ten Years Later,  assuming you can’t catch the original Wet Hot American Summer movie in between. We were already spoiled to get one great Netflix miniseries inspired by one of the most underrated comedy movies of the past couple of decades, and getting a second good one is just as much a treat! Like the characters however, we’ve reached the point where it’s probably best if we start leaving our fond memories of Camp Firewood in the past.