Telltale has revealed when the next episode of their well-received episodic adventure game, Game of Thrones will drop. A new trailer revealed for the episode pegs the first week of February as the date for the second episode of six, The Lost Lords. 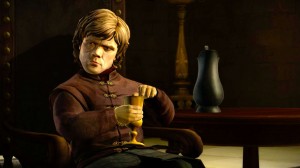 Be wary if you’re checking out the trailer before playing through the first episode, Iron from Ice, as it reveals some spoilers for that first episode.

Set in the fantasy universe of the ultra-popular HBO television series, Telltale’s Game of Thrones unfolds between the events of Season Three, and the upcoming Season Five, which will begin airing on Sunday, April 12th this year. Centering on House Forrester, a faction teased in the novels but never actually seen in the TV series, the game aims to give players a new look at the universe of Game of Thrones, further fleshing out an unseen corner of the show’s world that puts the power of life and death in the player’s hands with every decision, which can often lead to unforeseen consequences.

Game of Thrones Episode 2: The Lost Lords can be downloaded standalone for $4.99, or will be awarded free to anyone who has already purchased the game’s Season Pass. The episode will go live for PC, Mac, PlayStation 4 and PlayStation 3 on Tuesday, February 3rd, next expanding to Xbox One and Xbox 360 on Wednesday, February 4th, and finally launching for iOS and Android devices on Thursday, February 5th.

There’s currently no word on when to expect the second episode of Tales from the Borderlands, the also well-received episodic adventure game that Telltale is working on alongside Game of Thrones, though it no doubt should be soon. Telltale is also at work on a third season of their big breakout hit game series, The Walking Dead, and will release an episodic adventure game set in the Minecraft universe, Minecraft: Story Mode, some time this year.

Keep conspiring Eggplante for all news and updates on Game of Thrones, and other Telltale projects.