Benoist is ironically the second Glee personality to headline a show as a high-profile DC superhero. Grant Gustin, the star of The CW’s highly successful primetime TV series, The Flash, was also on Glee before hitting it big as the Scarlet Speedster.

You can currently see Benoist alongside yet another prospective superhero actor, Miles Teller, soon to be portraying Fantastic Four leader, Mister Fantastic for Fox and Marvel in this August’s movie reboot, The Fantastic Four, in acclaimed drama series, Whiplash. Her Glee character, Marley Rose was also a part of the show for two seasons.

Supergirl’s leads will comprise several other familiar DC Comics personalities that have yet to be cast according to a leaked cast roster, including two future DC villains, Winslow Schott/Toyman and Hank Henshaw, as well as media personality, Cat Grant. Another lead will be an original character, Alex Danvers, the adoptive cousin of Supergirl, and a reference to another Supergirl from DC lore, Linda Danvers. It’s still unknown however whether Supergirl’s cousin, flagship DC hero, Superman will factor into the series at all, beyond a mention in the show synopsis of Kara’s ‘famous cousin’.

While there was hope for CBS to potentially cross Supergirl over into the DC Television Universe primarily shared between Arrow and The Flash on the CBS co-owned The CW (and soon to welcome Vixen, as well as a third unidentified spin-off that may star Brandon Routh’s Atom), CBS chairman, Nina Tassler recently claimed that the network would prefer to keep the show to themselves, in its own self-contained universe. Depending on Supergirl’s performance with fans however, who knows what the future holds. 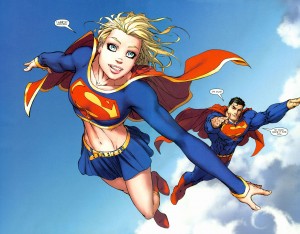 CBS has already ordered Supergirl straight-to-series, making it the second DC Comics-inspired show to be ordered straight-to-series following FOX’s Gotham. It will likely debut for this Fall’s 2015/2016 television season, joining confirmed new seasons of fellow DC Comics primetime shows, Arrow, The Flash and Gotham, with NBC’s Constantine currently the only other DC Comics-inspired show without a renewal order as of yet. Other networks have also gotten pilot orders for treatments of other DC Comics-inspired shows, namely a Teen Titans show, Titans for TNT, and a Superman prequel series, Krypton for Syfy, both of which will exist in self-contained continuities and universes, a la Gotham and Constantine, and apparently Supergirl at this point.

Keep flying to Eggplante for all news and updates on Supergirl, and other high-profile DC television projects.