After hackers dug deep into the game code of Pokemon X and Pokemon Y for Nintendo 3DS following their release in October 2013, they found data for three unannounced new Pokemon, all thought to be secret event Pokemon that Nintendo or Game Freak had yet to acknowledge. The first of those mystery Pokemon, Diancie was later revealed to indeed be a secret event Pokemon that would headline its own movie, and could be collected during a Gamestop promotion. The other two however, remained shrouded in secrecy. 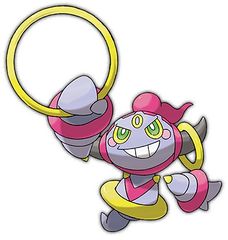 Until now! Nintendo and Game Freak have just officially revealed the existence of the second secret Pokemon, Hoopa, with both a press release and trailer. Hoopa, like Diancie, will headline its own Pokemon movie in the near future, and the reveal trailer appears to indicate that it will feature into a special event planned for Pokemon Omega Ruby and Pokemon Alpha Sapphire. Sadly, no details are yet available as to how exactly players can attain Hoopa.

Hoopa is the series’ first Psychic/Ghost-type Pokemon, and features the ability, “Magician”, which allows it to steal an item held by an opposing Pokemon after Hoopa deals damage to an enemy. It also knows the exclusive moves, “Hyperspace Hole” and “Hyperspace Fury”, which can even penetrate moves like “Protect”, “Detect”, or any other moves that would normally cancel an opposing attack if they are successful.

Hoopa also comes in two forms, its smaller “Hoopa Confined” form, and its enhanced “Hoopa Unbound” form. When a player uses a special item called a Ghost Bottle, Hoopa will change to its alternate Hoopa Unbound form, making it larger, more powerful and far more menacing. Hoopa will remain in its Hoopa Unbound form thereafter for three real-time days, or until it’s deposited in a Pokemon Center Storage Box. 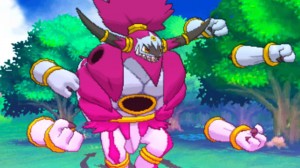 This means that only Volcanion, the third of the undiscovered secret Pokemon buried in the game data of Pokemon X and Pokemon Y, remains formally unannounced by Nintendo and/or Game Freak. Hackers dug into Pokemon Omega Ruby and Pokemon Alpha Sapphire after it launched this past November however, and found event data and dialogue related to both Hoopa and Volcanion, suggesting that Nintendo has plans for special events surrounding both secret Pokemon in the remakes.

We’ll be sure to keep an eye on developments regarding how Pokemon fans can get their hands on an official Nintendo-distributed version of Hoopa. In the meantime, keep catching Eggplante for all news and updates on the Pokemon series.