After kicking off 2015 on an excellent note, between the superb episodes, “Left Behind” and “Midnight City”, Arrow stumbled a bit in the home stretch of its mini-trilogy spotlighting the supporting cast with this week’s episode, “Uprising”, which ended the long struggle against Brick at last.

For its flaws though, “Uprising” still led up to a satisfying, albeit somewhat contrived final confrontation with the thick-skinned Green Arrow villain that Vinnie Jones has so wonderfully realized in the The CW’s DC Television Universe. As Brick’s grip on The Glades tightens, Roy, Laurel, Diggle, and Felicity (strangely, Ray was absent this week) are left to rally the downtrodden citizens of the lower-class neighbourhood to drive out Brick and his men, without police assistance. Sin even returns at long last to join the fun, rather late to the party, since you’d think that Sara’s death would draw her out for Season Three a whole lot sooner. 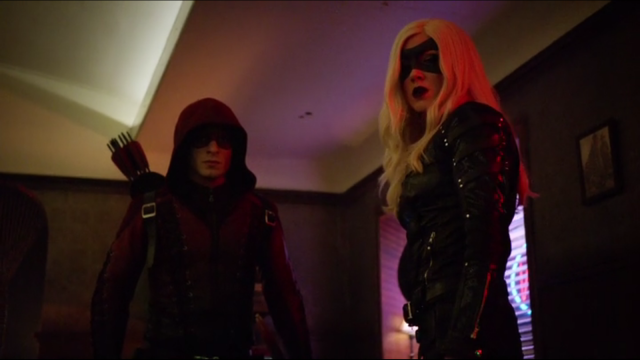 Sin doesn’t even seem to be aware of Sara at first. Like Captain Lance, she initially mistakes Laurel for her sister, but soon after, she manages more sense than the captain, and realizes that the blonde, leather-clad woman in the Canary garb is not Sara. Sin even points this out to Captain Lance after Brick is successfully apprehended after the big struggle. His reaction seems to be being left for another episode, but that’s fine, even if it still begs the question of how Lance hasn’t detected that something’s up with Sara being clearly off-the-radar.

The big fight itself is very cool though, and presents lots of great action beats. We even get to see Laurel kick some ass more effectively this week, even if she’s still taking plenty of licks herself. Ted Grant even puts on his Wildcat garb for the fight, and this shows our first glimpse of Laurel’s trainer in his vigilante gear! Sure, it’s almost disappointingly basic compared to the Wildcat costume in DC Comics, but it’s satisfying nonetheless to see Grant suiting up with everyone else to liberate The Glades.

Another reason why the fight works so well is that the episode effectively spotlights an interesting conflict with Team Arrow beforehand. It comes to light that Brick was actually the one who murdered Malcolm Merlyn’s wife, leaving Merlyn desiring revenge, and trying to form an alliance with Oliver’s surviving partners to take Brick down. The group actually has a pretty spirited debate on the subject of teaming up with Merlyn, and it’s probably one of the show’s most challenging moments for the leads, especially with Oliver not being around to take charge. The group ultimately rejects Merlyn’s offer, but that doesn’t stop him from trying to kill Brick during the big battle anyway.

This leads to the only stumbling block in what’s otherwise a great climax to the Brick trilogy however. Oliver makes it back to Starling City surprisingly quickly, getting some help from Tatsu, and just barely stops Merlyn from killing Brick. Oliver’s return felt very abrupt and contrived, despite the show trying so hard to make it a big moment, and it might have been more effective if he’d shown up after the fight was done. The fact that The Arrow delivers a big speech about his return and how the people stood up in his absence, having not failed the city, only drives this point home further. 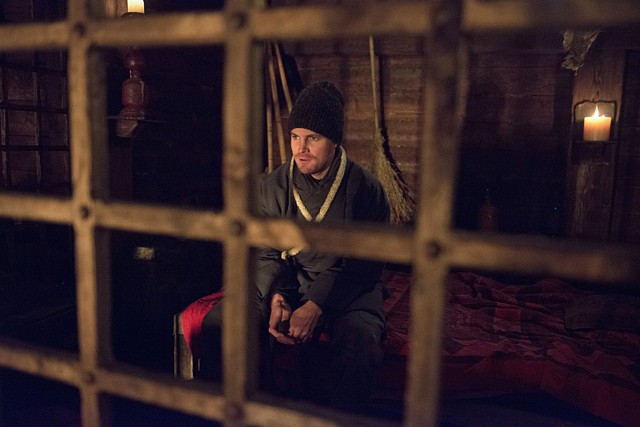 Another interesting and more successful unique hook of this episode is having the flashbacks focus on Merlyn this time. It’s neat to see the show’s mandated flashbacks sometimes incorporate other characters, with Diggle, Felicity, and the late Moira all getting their turn at some point. This is the first time that the show has truly spotlighted a villain in the flashbacks though, and it’s cool to see the beginning stages of how Merlyn found himself on the path to darkness, including his first (mistaken) kill after his wife’s death. I hope that this isn’t the last time that the show centers its flashbacks on Merlyn, as the character’s journey still has plenty of intriguing mysteries left to discover.

The proceedings and outcome of the episode were largely predictable. Oliver was bound to return in the nick of time, just as Brick was bound to be defeated and apprehended, as was the rejection of an alliance with Merlyn that wouldn’t have lasted long anyway. Still, there were some surprising moments, particularly Sin finally pointing out to Captain Lance that something is up with the new Canary, and in the end, “Uprising” felt like a nice return from an extended vacation, even if Oliver’s return definitely could have had more impact.

Still, with Oliver back in Starling City, here’s hoping that the show remains on the more sure footing it’s found for 2015 so far.

Arrow 3.12: "Uprising" Review
Arrow stumbled a bit this week with a somewhat contrived return for Oliver, but nonetheless presented a satisfying conclusion to the battle against Brick, and some cool Merlyn-centric flashbacks.
THE GOOD STUFF
THE NOT-SO-GOOD STUFF
2015-02-06
77%Overall Score
Reader Rating: (1 Vote)
77%