If you’ve so far opted out of subscribing to Nintendo’s Pokemon Bank app, a 3DS app that allows players to store up to 3,000 Pokemon from Pokemon X, Pokemon Y, Pokemon Omega Ruby, and/or Pokemon Alpha Sapphire on a cloud server, vastly exceeding the limits of each individual game’s Pokemon Storage Boxes, you may wish to reconsider soon. 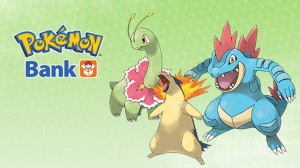 Nintendo and The Pokemon Company have announced that they’re offering an incentive for both new and veteran Pokemon Bank subscribers, starting this month, on February 27th. Those who either already have a subscription, or pay the $4.99 fee for one after that time, will receive the final evolutions of the three Johto starter Pokemon from Pokemon (Heart)Gold Version and Pokemon (Soul)Silver Version, the Grass-type Meganium, the Fire-type Typhlosion, and the Water-type Feraligatr, to freely transfer to and from their 3DS Pokemon games. The incentive runs until November 30th of this year, which is a pretty generous timeline for those interested in these rare and very valuable Pokemon, none of which can be caught through normal means, and the pre-evolutions of which can only be attained with extensive trading, and likely starting new game files continually.

This promotion follows on the heels of the final evolutions of the three Unova starter Pokemon from Pokemon Black Version and Pokemon White Version being distributed via special codes over the past couple of weeks. albeit only for owners of Pokemon Omega Ruby and/or Pokemon Alpha Sapphire. As with those Pokemon, the free Meganium, Typhlosion and Feraligatr that will be offered to Pokemon Bank subscribers will all be at level 50, and will all come with hidden abilities that they don’t normally have. Meganium will have ‘Leaf Guard’, which protects it from status ailments during harsh sunlight conditions (and will know the move ‘Sunny Day’, allowing you to create that condition), Typhlosion will pack ‘Flash Fire’, making it immune to Fire-type attacks and increasing its own Fire-type attack power (it will come with Flame Charge, Flamethrower and Overheat to help exploit this), and Feraligatr will boast ‘Sheer Force’, which eliminates added effects of attacks, but also increases attack power by 30%.

Be advised that just having a Pokemon Bank account isn’t quite enough. You need to actually access the ‘Pokemon Link’ feature in the app, and transfer over the free Pokemon within the timeline, and while you have a subscription, in order to keep them. Obviously, this also requires owning at least one of the four mainline Pokemon games available for 3DS as well.

Keep catching Eggplante for all news and updates on the Pokemon games.