NOTE: Our apologies for the tardiness of this review. Our regular television reviewer was ill at and around the time of airing.

As Constantine nears its first season finale (and hopefully not series finale), another big DC connection was introduced to the show this week, after the odd, out-of-place sojourn that it took with last week’s disappointing episode, “A Whole World Out There.” Fortunately, “Angels and Ministers of Grace” got Constantine back on track, with a more recognizable and appealing storyline, even if DC fans may feel that some elements of the episode were a missed opportunity.

The big macguffin this week was the Black Diamond, a substance that DC fans should be familiar with, either as the fell stone of demonic super-villain, Eclipso, or the substance mined from Apokolips, the hostile planet of Superman villain, Darkseid. In the case of Constantine, the Black Diamond’s host led to them unleashing a berserk rage, with two known addicts being the first fatalities. 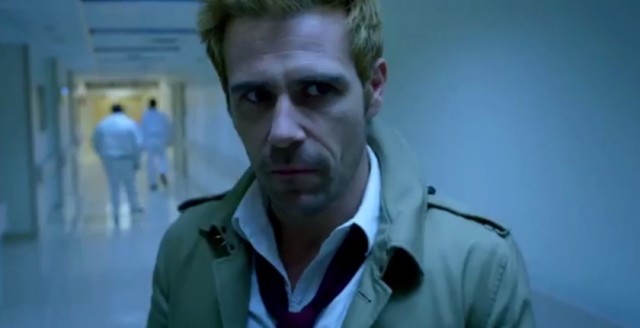 Mercifully, Chas and Zed were back this week, after inexplicably sitting out last week’s episode, with Chas having to help the group infiltrate the hospital with his ability to heal and resurrect. Apparently, Felix Faust didn’t remove these abilities entirely after all. Zed also has another bad reaction to the magical world, though is thankfully in the right place when this occurs. Unfortunately, she also learns that her psychic visions are the result of a brain tumour, which she debates removing to liberate herself of the pain and burden that come with her gifts.

The arc with Zed was a poignant one, especially in how it reflected back on Constantine. In a way, Constantine is probably used to his companions not sticking around long, and often winding up dead, as can often be the case in DC’s Hellblazer comics, but this is the biggest sign yet that Constantine has grown attached to Zed. His attempts to bury his anxiety over her condition fail, and are only drawn out more when Manny appears to call attention to Constantine’s care for Zed.

Speaking of Manny, fans of his character were really in for a treat this week, as Constantine bound Manny into a mortal doctor’s body for the duration of the episode, preventing him from abruptly returning to Heaven. This led to a great mix of both drama and humour, as Manny continues to discover the human impulses that are beyond angels, especially when his host is revealed to be having a top secret sexual affair with a nurse, which Manny gets to enjoy.

Especially effective here though was Zed’s first real interaction with Manny, with Zed deducing that one of the doctors speaking to her is not a real doctor. The dialogue between these two was very emotional here, with Zed confiding in Manny that she worries about her powers coming from an evil source. Manny admits that he is cut off from his abilities, but assures Zed that God has not abandoned her, and what truly matters is how she puts her abilities to use, not where they came from. It might have sounded a bit cliche with the wrong dialogue, but the scene between Zed and Manny is framed and executed well on all counts, particularly with Zed now getting her first direct interaction with Manny, even considering the events of “Blessed are the Damned.”

Between Constantine and Manny, the other doctor tending to Zed is revealed to be the host of the Black Diamond, a shard of which was blasted into him during his time as a military medic, murdering patients around the hospital due to the drawn-out rage he feels toward them for slipping back into their damaging addictions. The confrontation with the mutated doctor is a little abrupt and unsatisfying, and the scene of Manny beaming him up to Heaven was a little cheesy, I’ll admit. It was also disappointing that the show oddly failed to bring up Eclipso in any way. It was inevitable that Constantine wouldn’t bring Apokolips into proceedings, but not incorporating, or even teasing Eclipso somehow felt like a huge missed opportunity, especially after another big magical DC baddie, Felix Faust made his debut a couple of weeks ago.

Regardless, the episode concludes with Zed now being able to see and interact with Manny as Constantine can, even when Manny is in an angelic state. This isn’t really explained well, but it’s a satisfying result nonetheless. It was a bit predictable that she wouldn’t remove the tumour in the end, especially when it was revealed that her doctor is a possessed monster, but Zed is becoming a better character with every appearance at this point, so it would be a shame to cut off her magical affinity now. Again, hopefully the show gets more than one additional episode to keep telling her story.

Constantine may not have totally capitalized on its great story concept this week, but “Angels and Ministers of Grace” was still a satisfying episode overall, and definitely went back to being a recognizable Hellblazer adaptation. With one more episode before Season One is done, let’s hope that it can maintain this satisfying direction for at least one more week.

Constantine 1.12: "Angels and Ministers of Grace" Review
Constantine brought forth another cool DC connection this week, but didn't entirely make the most of it, even if the great material with Zed and Manny helped to compensate.
THE GOOD STUFF
THE NOT-SO-GOOD STUFF
2015-02-09
82%Overall Score
Reader Rating: (2 Votes)
42%