Peralta’s not taking his breakup with Sophia terribly well. That should come as little surprise. Perhaps more surprising however is that the precinct is invited to participate in a Homeland Security-sponsored training exercise.

This episode, which was re-titled from “Hostages” to “Windbreaker City”, for reasons unknown, was generally a solid offering, even if it was another episode that shifted the series’ tone to increasingly juvenile. The main plot of the episode involves the precinct trying to distract Peralta from his grief over losing Sophia by giving him the opportunity to muck up a very important training exercise, after the Nine-Nine are forced to be inactive hostages. This makes for some good jokes, though it’s hard not to wonder why Homeland didn’t just pull the plug immediately when the Nine-Nine starts acting out. 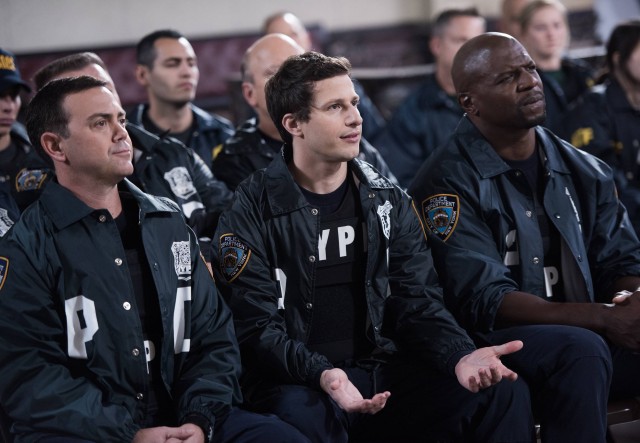 It’s uplifting in a sense to see the cops stick up for their profession against the government agents, particularly since, as with Peralta, the audience will gradually forget about Sophia as the episode goes on. “Windbreaker City” does a great job of putting viewers in Peralta’s shoes, investing them in the ill-advised lunacy mainly because we’re no longer dwelling on a lost love interest. It’s a bit ingenious that way.

Of course, this also means that “Windbreaker City” is mainly just about raw stupidity, but that’s fine, given the more dramatic circumstances of the show’s previous episode. The episode tries to cram in a tense subplot between Santiago and Diaz, who are fighting over having to take off a Saturday, but this doesn’t really go anywhere important for the most part. It was sweet to see Santiago give Diaz the day in the end, despite winning the challenge that would have had her get the day off for, “Power Pose” training (what?), and it was all the sweeter when Diaz revealed that she is introducing her boyfriend to her parents, which is why it was so important to her. The two almost had a nice bonding moment, until Santiago pushed the sentiment too far, and Diaz shows her what a real power pose is.

Meanwhile, Peralta tries to stick it to the man in charge, yet again throwing as many Die Hard references into proceedings as he can. Peralta even inadvertently gives the head agent the idea to use the gun duct taped to his back, a la John McClane, to narrowly cheat Peralta out of winning his challenge to the agents, after the two end up in a stand-off. Apparently, someone took out the agents that pinned down and eliminated Diaz and Santiago off-screen. Whatever.

The subplot of the episode was left to revolve around Captain Holt and Gina, with Gina telling Holt that she needs his help on a psychology test that she’s doing for school. Holt agrees to help, and learns that he has the same personality type as Gina. Initially, this seems to frighten him, leading to a very funny sequence of Holt trying to prove the test wrong using a box of donuts (don’t ask), though eventually, he is forced to concede that Gina really is good leadership material. Holt still gets the last laugh in any case, as he ‘promotes’ Gina to overseeing even more precinct paperwork, due to her apt personality. Ha, well played, Holt. Gina’s pained reaction to her promotion made it all the more amusing.

The episode concludes with Peralta finally returning Sophia’s things, with the two sharing a sad final moment before going their separate ways. Again, like Peralta himself, it’s tough to see Sophia go, but maybe, just maybe, she’ll return someday. We can vainly hope, just as Peralta did amidst incessantly checking his phone for texts.

“Windbreaker City” was a solid episode of Brooklyn Nine-Nine all around, once again emphasizing silly hijinx above any semblance of realism. Still, it was in the service of putting Peralta on the mend for bigger and better things. and it’s also nice to see that he’s not immediately trying to run into Santiago’s arms. Let’s hope it stays that way for a while.