Gotham hit a great high point for its early 2015 run with last week’s episode, “The Fearsome Dr. Crane”, which was packed with awesome setups, and left a great impression. Unfortunately, “The Scarecrow” somewhat inverts these qualities, making for an episode that much better services the actual character of Proto-Scarecrow, Gerald Crane, as well as his ill-fated son, Jonathan, who will one day develop into the Scarecrow that will menace Batman, and Gotham City at large, but fumbles many of last week’s promising developments with the other characters.

Fortunately, we learn in “The Scarecrow” that Gerald Crane is not just killing for sport. Instead, Crane is trying to develop a formula that will inoculate him of fear, which he believes is an obsolete human limiter, and hopes to eventually rid humanity at large of the affliction of fear. Injecting himself with his unfinished formula, Crane hallucinates about his late wife burning in a house fire, as she asks why he didn’t save her. Apparently, Crane is tormented by him failing to save his wife because he was too afraid to venture upstairs when his house caught fire.

This helps to make Crane Sr. a far better and more interesting villain. It also helps to justify the fact that he would ever inject his son with an experimental formula, believing that even if he gets arrested or killed (and Gordon and Bullock are indeed forced to kill Crane Sr. when he shoots at them towards the end of the episode), Jonathan can take up his mantle. During the climax of the episode, Jonathan also happens to hallucinate a demonic scarecrow, setting him up for his villainous turn, with the episode ending with Jonathan being permanently locked into a state of intense fear, and pretty well insane. 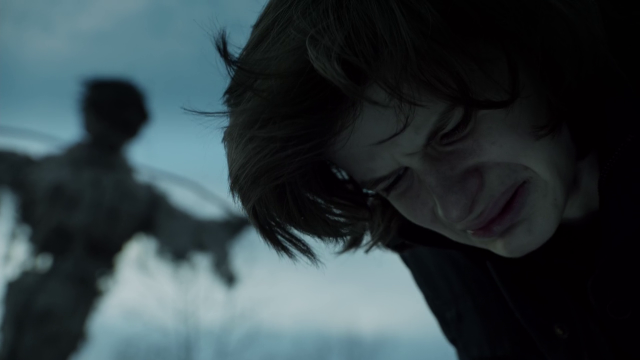 This is very cool, as it adds a new tragic element to Scarecrow’s character that isn’t generally present in other Batman media. The idea that Scarecrow never escapes a state of intense terror is as chilling as the acts of the villain himself, who may simply be acting out of corrupt instinct in the case of Gotham, rather than genuine evil. It was also very cool to see the early effects of the fear compound, before Jonathan inevitably re-purposes it into a convenient ‘Fear Gas’ as in DC lore, giving Scarecrow a more impactful and effective turn in live-action than he had during his only other live-action portrayal, in Christopher Nolan’s Dark Knight trilogy of movies. Hopefully, Jonathan isn’t confined to that hospital bed forever, as I’d love to see him continue his descent into becoming Scarecrow in a later season.

As much as the Scarecrow material was far better this week however, it once again felt like it came at the expense of every other character arc, which is a problem that Gotham has often had in 2015 especially when it really gets one thing right. Despite Maroni initially wanting to violently murder Penguin for being a spy last week for example, he simply shrugs when Falcone bribes him with the life of a hard-assed judge (whose forcible confinement by Falcone needs to be seen to be believed), and then decides that Penguin can live, as long as he doesn’t spy again. Yes, he threatens Penguin for when Falcone dies and Penguin is left without a protector, but that still makes Maroni look like he’s letting the issue of Falcone’s and Penguin’s treachery go far too easily.

Likewise, despite kissing her in front of everyone at the office just a few weeks back, Gordon suddenly has a problem with Leslie Thompkins being affectionate with him in the workplace. Sure, it’s understandable to a point, especially since Gordon’s reputation at the GCPD is dicey as it stands, but he just comes off as a bit of a tight-ass about it. The two end up finding common ground with how to carry on at the precinct, but it’s hard to sympathize with Gordon when he comes off not as wanting to be professional, but honestly rather whiny.

Meanwhile, Fish Mooney apparently lost that strange anime fight she was about to have with the commando off-screen, and has ended up in some sort of large squatters’ prison. Fish herself remains a great character that is fun to watch, but this actual subplot just ate up time unfortunately. It’s inevitable that by the end of the episode, she’ll have offed the guy in charge, and will have seized control of the prison. She’ll probably be out in an episode or two, making this whole story seem rather redundant.

Lastly, Bruce Wayne decides to go on a hike, something he used to do with his father. He ends up slipping down a hill and spraining his foot after angrily destroying his father’s commemorative rock display, and has to spend well into the evening crawling back up the hill, finding Alfred at the top. Alfred bluntly tells Bruce that he was made to climb the hill on purpose, since he needs to toughen up about his tween angst. Fortunately, the two share a better moment afterward, with Alfred asking Bruce if he wants to sleep outside and watch the sunrise. Sure enough, Alfred gets Bruce up at the crack of dawn, something that he’ll no doubt have significantly more trouble doing when an adult Bruce dons the cape and cowl several years down the road. 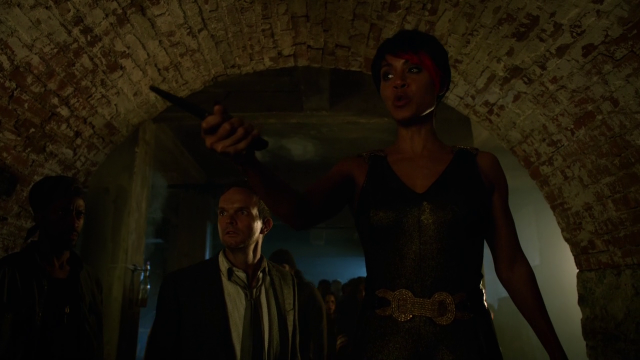 “The Scarecrow” was a decent episode, but definitely fell short of last week’s. At least it served its title character proud, which is more than episodes like “Selina Kyle”, “Harvey Dent” and “The Mask” can claim, but it felt like Gotham has slipped back into old habits, and is once again fumbling its otherwise great ideas. With the big promise of a possible Joker storyline next week, hopefully this is the show just shaking off some last-minute rust before things really heat up again.

Gotham 1.15: "The Scarecrow" Review
Gotham somewhat slipped back into old habits with an episode that failed to replicate the appeal of last week's, but at least did right by the title character, and had another great moment between Bruce and Alfred.
THE GOOD STUFF
THE NOT-SO-GOOD STUFF
2015-02-11
75%Overall Score
Reader Rating: (0 Votes)
0%