NOTE 2: Full spoilers for this episode of Agent Carter, including a major character death, are present in this review

Things are looking pretty bad for Peggy. Captured and staring down a lengthy interrogation at the SSR, Peggy is now helpless to stop Leviathan. It’s here where Peggy also spills on having to go behind the SSR’s back simply because she wasn’t taken seriously as an agent, to Dooley, Thompson and Sousa, which leads to a gratifying character moment for Peggy, and kicks off what is arguably one of this miniseries’ best episodes of all!

To start, Hayley Atwell was absolutely fantastic during the scenes where Peggy is interrogated. Seeing her both chastise and lament her male colleagues was a heavy moment that Atwell sold perfectly, particularly when she fesses up about hiding the last remaining sample of Captain America’s blood. The tear-jerking line about her believing it was another way to keep Steve safe was genuinely heartbreaking, as was the men forced to face up to what they drove Peggy to, and reacting in various ways. It also felt appropriate that Thompson was ultimately the one to question Peggy actually being a traitor, considering the many great moments they had during “The Iron Ceiling” together. 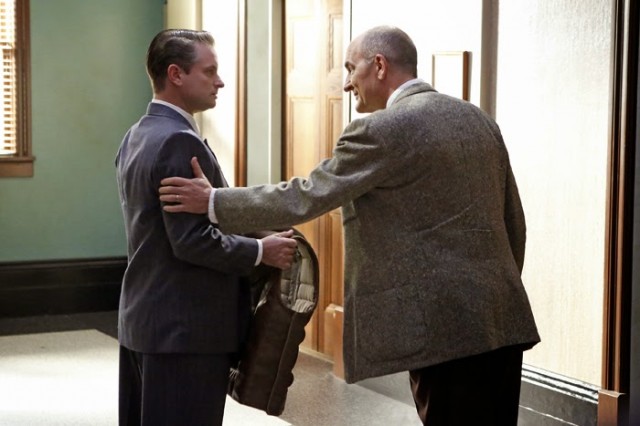 When all is said and done though, Jarvis comes along with a signed confession, apparently from Howard Stark himself, which leads to suspicion being taken off of Peggy. It’s not long before Peggy deduces that the confession is fake, but it doesn’t matter, as Doctor Ivchenko uses his magic hypnotizing ring to take control of Chief Dooley. Dooley locks Peggy and Jarvis away, and proceeds on his mission to bring one of Stark’s weapons to Leviathan.

“Snafu” excellently built on the moments with Ivchenko’s hypnosis, even if it still begs the question of how that ring actually works. We now see how Ivchenko tricks people into seeing what they want to see, and exploits Dooley’s issues with his family to make him believe that he is somehow reconciling with his wife and children, as he hands a deadly Stark weapon to Ivchenko. This also leads to Dooley being trapped in another Stark invention, an experimental battle armour by Howard that is highly defective (obviously a loose nod to Howard’s future successor, Tony being Iron Man in the present day), and can’t be removed, eventually over-heating and exploding, also feeling like a loose reference to Extremis from Iron Man 3.

As the SSR must confront the state of their chief, Dooley must resign himself to his fate after he’s snapped out of his hypnosis. Yet more heartbreak was had as he laments never getting to fix things with his family. He then looks at Peggy and delivers a badass final line, urging her to, “Get the son-of-a-bitch that did this”, before shooting out a window and diving out, exploding in spectacular fashion. 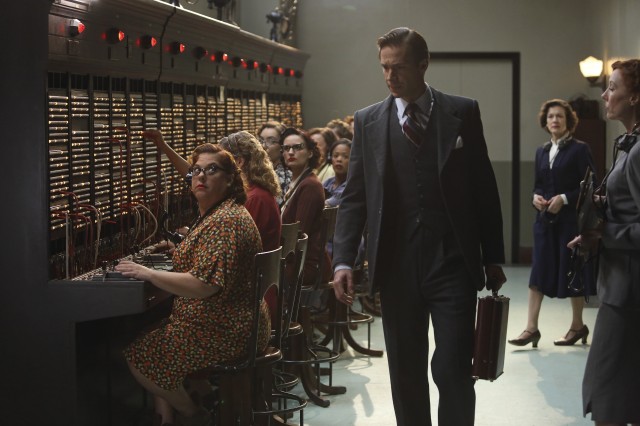 So, Dooley is another casualty of Leviathan for the SSR, and naturally, this hits the organization pretty hard. Peggy may have had her name cleared, and may now be getting the recognition she deserves, but the cost still feels heavy, as Dooley sacrifices himself to keep the battle against Leviathan going. Fortunately, there was plenty of comic relief leading up to this moment, with Hayley Atwell and James D’Arcy once again getting to have some fun together as Peggy and Jarvis, trying to escape their confinement by Dooley. The dialogue here is very funny stuff, and it’s the most amusing moment that these two have had in a while.

After the big Dooley death and the escape of Ivchenko with Stark’s weapon however, we learn just what it is Leviathan was after; Another botched Stark invention that was meant to keep soldiers awake for lengthy missions without sleep, called, “Midnight Oil.” Instead, the device secretes a toxin that makes people go berserk and kill each other, as proven after Ivchenko and Dottie deploy Midnight Oil in a crowded movie theatre, leading to the episode ending with an usher discovering everyone dead inside.

Yes, this ironically echoes the tongue-in-cheek villain plan of comic book adaptation, Kingsman: The Secret Service, currently in theatres, only this time, it’s played straight. All irony aside though, this is still a deadly weapon in Leviathan’s hands, and as the penultimate episode of Agent Carter winds down, it paves the way for a pretty promising climax for this miniseries. 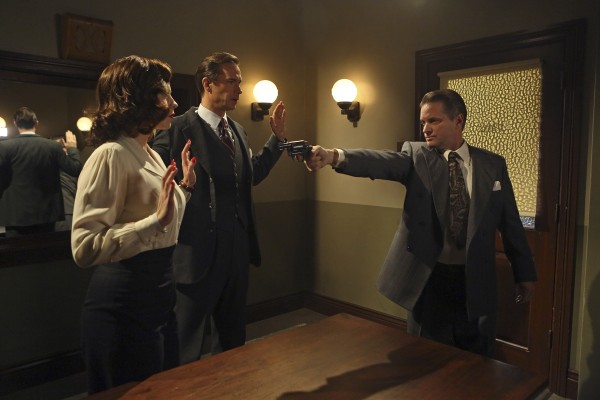 Thanks to the excellent emotional moments throughout, and non-stop thrills of Leviathan’s pressing mission, “Snafu” stands with “The Iron Ceiling” as another highlight episode in this already overall great Marvel miniseries. The episode fired on all cylinders between its comedy, its drama and its pacing, and represents the best of what Peggy Carter’s story has had to offer to the Marvel Cinematic Universe at this point. The only downside is that it will make you upset about there being only one episode left.