NOTE 2: Full spoilers for this episode of Gotham are present in this review

Gotham appeared to be set to take on a massively anticipated villain arc this week; The (apparent) origin of future Batman arch-nemesis, the Clown Prince of Crime himself, The Joker. Granted, it’s probably a red herring (the fact that the guy has red hair feels like an in-joke by the showrunners), but for now, this tease that The Joker will eventually come was nonetheless cool and appreciated.

The episode also served as a springboard for The Flying Graysons, the family of circus acrobats who will one day sire Dick Grayson, the first Robin that Batman takes under his wing, and the future independent DC superhero, Nightwing. After Gordon and Leslie attempt a date at the circus, Gordon must break up a brawl between the Graysons and their rival family, the Lloyds, which unfolds in front of an entire crowd during a show. How this circus stays in business with public clashes like that, I have no idea. 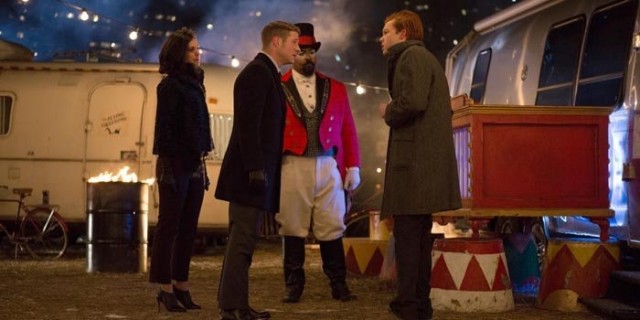 All the while, Gordon and the GCPD must take the family statements, including the constant bickering of a teen Grayson boy and a teen Lloyd girl. Three guesses who ends up in a relationship by the end of the episode, and who Robin’s parents are. Nonetheless, it was a bit neat to see Gotham attempt more of a backstory for Robin’s parents than them just meeting and falling in love for… Reasons. It still had to be squished into one hour-long episode, but the effort was there.

Anyhow, the main plot of the episode involves one of the circus performers, a ‘snake dancer’ named Lila, being murdered and found by her pet snake after Gordon lets the creature out of its cage. Seeing as Lila had affairs with men on both the Grayson and Lloyd side, there’s no shortage of murder suspects, with her son, Jerome appearing to be left an orphan.

A clue is gained however when another circus performer, a blind psychic, predicts that Gordon will find a clue in a mysterious location. Leslie is delighted at the psychic’s prediction, but Gordon dismisses it, saying that all psychics are frauds. This causes an oddly severe spat between the two of them, which felt like it was pulled from nowhere. Why does Leslie care so much about Gordon being an occult skeptic? Is that really such a big deal, especially when this conflict is entirely forgotten in their next scene together? 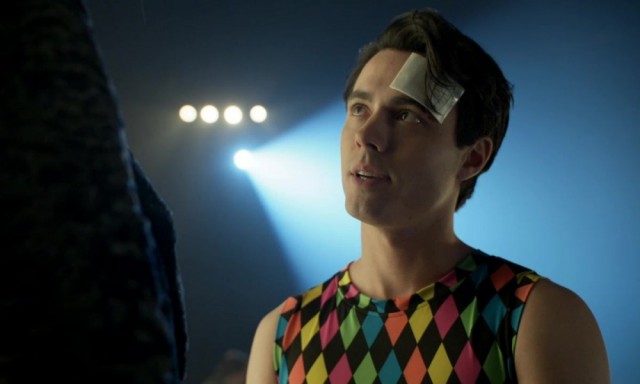 Regardless, I do have to commend the fact that Leslie and Gordon are actually a pretty great couple. They’re very charming, and their chemistry makes a lot of sense. Barbara actually threatens to derail a far superior relationship in this case, stumbling into the episode at the start, and strangely not caring that Selina Kyle and Ivy Pepper are squatting in her place. Selina and Ivy even give fashion advice, with Ivy overhearing Barbara coach Selina on how her looks can be a weapon, with a slight smirk. Yes, it’s an obvious Poison Ivy tease, but it was a neat moment, even if the dialogue between Barbara and Selina felt a little more contrived and hokey.

All of Barbara’s efforts are thankfully for naught, as she walks into the GCPD offices, only to find Gordon and Leslie making out. I guess Gordon got over the stick up his ass with PDA at work pretty quickly off-screen, after that was a thing a couple of weeks ago. We still don’t miss you, Barbara.

After a spirited speech by Bullock about the futility of the circus feud however (it was over a stolen horse many decades ago, go figure), the culprit behind Lila’s murder is revealed to be Jerome, who also happens to be the son of the psychic who tipped off Gordon. Jerome, a kind and co-operative presence throughout the episode, suddenly does a heel turn, and goes full-blown Jack Nicholson. There’s obviously no direct confirmation that he is in fact Gotham’s version of The Joker, and perhaps that’s a good thing, since, while his turn to crazy was very creepy and effective, it isn’t enough to sustain a character as massive and infinitely interesting as The Joker. Chances are, the real Clown Prince is still out there somewhere. 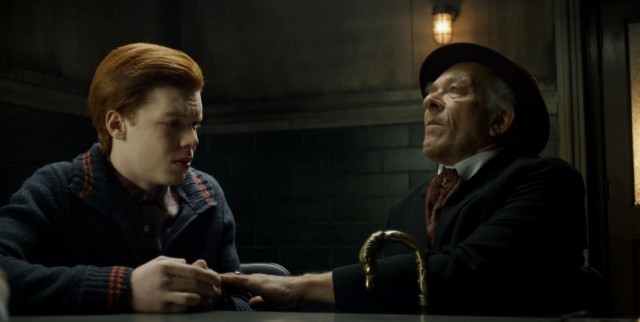 In any case, the mob really took a backseat in this episode, though that wasn’t so bad in this case. Fish’s material in the prison continued to be pretty dull, especially given the increasingly unlikely chances of the inmates rallying behind her when she blatantly admits that she’ll sacrifice them on a whim. By the end of the episode, she gains an audience with the head of the prison, but who cares. Fish’s sequences continued to just eat up runtime.

Likewise, Penguin had a rare lapse in quality this week, since it seems a bit unbelievable that his bar would be tanking as hard as it is. Considering that he’s such a shrewd, conniving character, how is he suddenly so inept at running a business? After spending so much time implying that Penguin is smarter than both Falcone and Maroni, it’s a bit disappointing that the show is suddenly trying to convince us that he’s in over his head here. Still, the dynamic of Penguin having to work with a tortured and broken Butch by the end of the episode is one with lots of promise.

“The Blind Fortune Teller” was a less remarkable episode than you’d think, considering that it’s meant to be teasing The Joker himself, but it was fine for what it was. The material with the GCPD is improving, but now the mob is suffering on the flip side. It seems pretty evident that Jerome is not the real Joker either, which made the tease feel like it couldn’t really anchor the episode. Gotham is still a little more uneven than it should be overall at this point, but at least it’s still getting better than its rough start at the beginning of 2015.