NOTE 2: Full spoilers for this episode of The Walking Dead, including multiple major character deaths, are present in this review

After its superb midseason premiere, The Walking Dead returned to aimlessly stumbling around in a circle with “Them.” While not a bad episode, the episode nonetheless proved frustrating, since it rehashed so much old material that The Walking Dead has already done to death, pun not intended, and just ended up feeling dull and pointless for the most part.

Things begin with the group’s van breaking down, and forcing them to travel on foot. With supplies running dangerously low, several especially sorrowful people begin to contemplate the seemingly impending death that awaits them. This namely includes Maggie and Sasha, who both lost people close to them over the past couple of episodes, and both struggle with their grief in different ways. Maggie appears to give up, while Sasha becomes reckless and sloppy, as if inviting the Walkers to put her out of her misery. 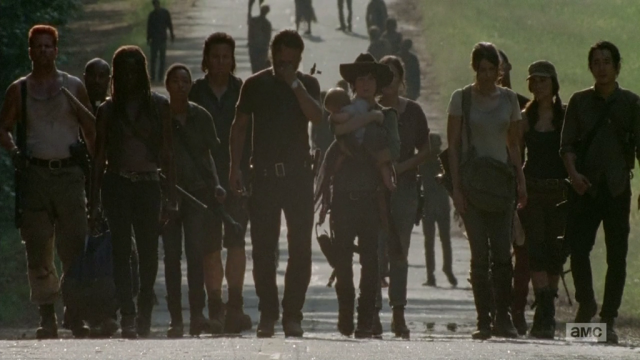 Some of the material with Sasha is solid, as she endangers the rest of the group as much as herself. Naturally, the loss of Tyreese during the previous episode hits her pretty hard, and after losing Bob earlier in the season, Sasha has essentially run out of people she’s attached to on a more intimate level. I suppose that she has a friend in Maggie, but Maggie is no better off, still reeling from the loss of Beth during the midseason finale. At least Maggie has Glenn to lean on however, for what that’s worth.

Still, this episode was a lot of despair with little ground gained. There is one interesting debate about midway through however, when the group finds a cache of bottled water, with a note claiming that it’s, “From a friend.” Desperate and starving, Rick nonetheless cautions the group that the water may be tainted or drugged in some fashion, and urges his crew to ignore it. Eugene attempts to take a drink anyway, only for Abraham to slap it out of his hand. It was a nice punctuation of dramatic weight in an episode that felt too much like it had the show going in circles.

This leads into a scene where rain falls, and the group must take shelter in a barn by night. Rick has to explain himself to the group, where he tells them that they must live with who they are and what they do, and that they are the so-called ‘Walking Dead’. It was a neat title call that makes for a cool re-interpretation of the show’s title, even if it felt like a semi-forced way for the showrunners to make an episode stand on something, when even they appear to admit that it’s only there to satisfy AMC’s traditional 16-episode order for the season.

By the end however, everything went somewhere noteworthy. A new survivor made himself known to Maggie and Sasha, that being Aaron, the man who was apparently responsible for leaving the water for Rick’s group. Aaron urges them that he can offer them safe haven, leading to him getting an audience from Rick. The episode ends on this note, as another destination appears to come into play, perhaps playing against the planned journey to Washington. Fortunately however, unlike the other false destinations that the show has tossed around lately, this debate felt more effective, presenting the dilemma of whether the group should risk it for an end to the apocalypse, or embrace the apocalypse and simply hole up and survive. 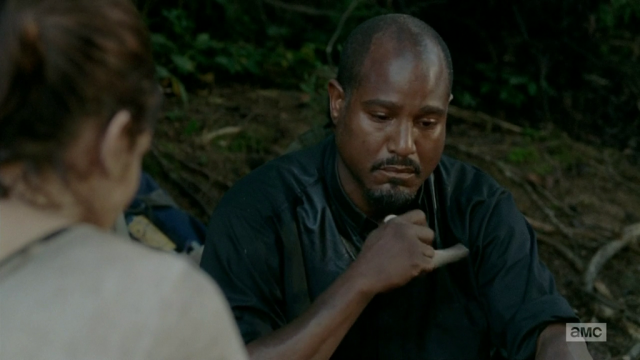 At this point though, “Them” leaves a pitiful lasting impression. It just felt like a mandatory way to connect two episodes with far more pivotal events, and have a 16-episode count for Season Five. There were some interesting moments, but most of the episode just felt like a snore, made worse by the fact that it just went back to the drama playbook of other seasons that came previously. At least the show found itself again by the end of the episode however, so these events can lead to better things later.

The Walking Dead 5.10: "Them" Review
"Them" was a disappointing episode that had The Walking Dead stumbling around in an aimless stupor, mostly recycling drama from previous seasons, though it at least ended on a solid note.
THE GOOD STUFF
THE NOT-SO-GOOD STUFF
2015-02-27
70%Overall Score
Reader Rating: (0 Votes)
0%