NOTE 2: Full spoilers for this episode of Brooklyn Nine-Nine are present in this review

Brooklyn Nine-Nine delivered an especially strong episode with “The Wednesday Incident”, a hilarious offering that had high-quality storylines for all characters involved. It also gave us a welcome reunion with Captain Holt’s husband, Kevin, yet again finding a great way to capitalize on Peralta’s immature meddling.

The main plot of the episode involves Holt being in a persistent bad mood, and the precinct beginning to grow tired of it. Peralta is determined to prove that something is wrong in Holt’s personal life that is making him act like such a jerk, and with a begrudging Kevin’s help, he attempts to figure out just what is grinding Holt’s gears, along with Gina, who is desperate to reclaim her good terms with Holt’s annoyed husband. 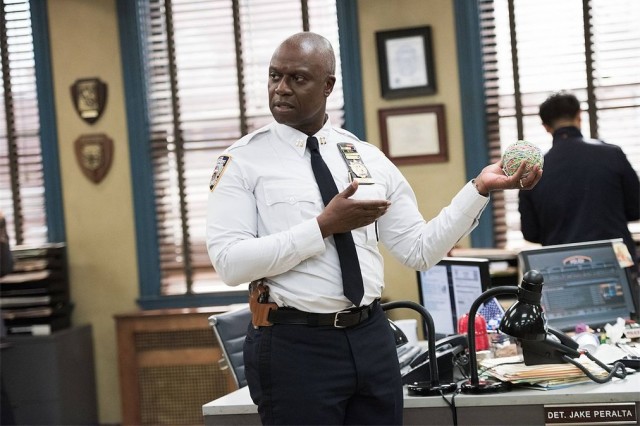 This leads to a hysterical collection of events that provides a brilliant window into Holt’s aggressively by-the-book personal life. The way that the show gives mere teases of Holt’s behaviour during his free time, without actually showing it, just made everything funnier. Every joke, from Holt’s bland breakfast to his highly rigid fencing regiment, made for high-quality laughs that clashed wonderfully with Peralta’s continued disbelief. It mirrored the audience’s disbelief nicely, as Holt feels so dull, and yet so interesting at the same time. It’s the perfect personal life for a character who has consistently walked an amazing line of hyper-professionalism and delightful eccentricity.

The result of the mystery was pretty satisfying as well. After Peralta finds footage of Holt about to be mugged on the street (which he naturally presents to Holt by intruding right into his house). The reveal that Holt actually effortlessly took out the bad guys both made sense and felt amusing. Apparently, Holt being reminded of his young loose cannon ways is what made him so angry, but he nonetheless thanks Peralta and Gina for helping to set him straight. His attempts to make amends to the precinct were pretty funny as well. Three desk decorations is probably pretty generous for Holt’s standards.

As for the subplot, Boyle rounds up a geriatric bank robber suspect, who charms Santiago and Diaz into thinking that he’s just an innocent and polite old man. Every time Santiago and Diaz have their backs turned however, the man confesses to Boyle that he did it, and that Boyle can’t prove it to anyone. This was incredibly funny, as Boyle’s frustration mounts, with the robber being ever-apathetic, and claiming that he didn’t even want the money, and just gets off on violence.

By the end of the episode however, Boyle gets his justice, albeit in a very different way than he no doubt anticipated. The robber dies during questioning, and Santiago and Diaz eventually realize that Boyle was right. It’s a more anti-climactic conclusion than the arc with Peralta, Gina and Holt, but it was nonetheless sweet, and didn’t leave Boyle as a screw-up at the end, even if the robber did kind of escape him, in death. 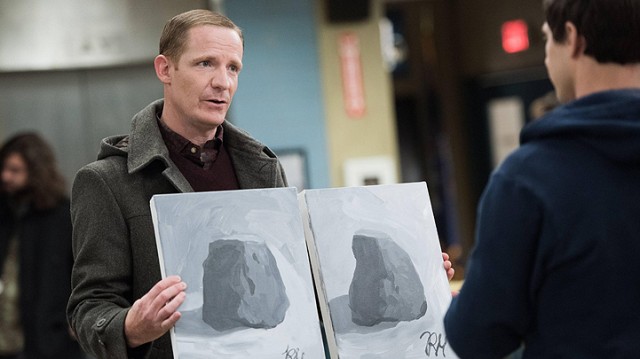 Every joke in this episode felt like a winner, and after the more upsetting break-up between Peralta and Sophia being continually referenced over the past few weeks, it was nice to have an episode that just fired on all cylinders with its comedy, much like season highlights such as “Chocolate Milk” and “The Pontiac Bandit Returns.” With an especially big event occurring for the show in the next episode, hopefully the excellent laughs just keep on coming!