NOTE: This episode aired last week, though our regular television reviewer was indisposed at the time of airing

NOTE 2: Full spoilers for this episode of Parks and Recreation are present in this review

After hitting such an amazing high point with the previous episode, “The Johnny Karate Super Awesome Musical Explosion Show”, it seemed inevitable that the following episode, the penultimate episode of Parks and Recreation, was bound not to recapture that same level of excellence. Naturally, “Two Funerals” was at a disadvantage at the start, since it was saddled with trying to wrap up absolutely everything that wouldn’t be addressed in the series finale that would come the following week.

Of course, the episode did begin with a hysterical bombshell at the very least, with the mayor of Pawnee, Walter Gunderson passing away. Gunderson is a character that has never actually been seen, and merely talked about every now and again, so it was downright hilarious to see him being portrayed by Bill Murray in a last will and testament video! This meant that “Two Funerals” used up its best joke in the opening minutes, but that’s not to say that the rest of the episode wasn’t funny.

The loss of the mayor spurs two key conflicts; Another reminder that Pawnee is changing forever, and the question of who will be mayor. Since several characters are leaving Pawnee, various guest stars are interviewed for the position, which basically allows for an onslaught of cameos. Joan Callamezzo, Dr. Saperstein, and even Bobby Newport (hooray, Paul Rudd!) are interviewed for the position, and all of them turn it down, with very funny results.

It seems like a new acting mayor will never be appointed in the end, until the group settles on… Garry! You’d think that there would be moaning and complaining, but for the most part, the show actually plays Garry’s inauguration as mayor pretty straight. He takes up the position, and all is well. When you think about it, it’s the ending that the guy really deserves, He’s the most qualified, and no doubt the least corrupt of any other contenders, which helps make all of the abuse that he took throughout the show feel worth it, since it all led to somewhere great for him.

The other “funeral” referenced by the episode is Ron’s barber, which sends Ron for a loop, and leaves him struggling in his own way to adjust to a life of change. After some very funny insight into Ron’s tipping habits, Donna remedies the situation by helping Ron find a new hairdresser in Typhoon, with the same price plan. After hearing about Typoon’s hatred of bicycles and Europeans, he decides that he likes his new situation, and settles in. It was another cool meta moment by the showrunners, continuing to help alleviate fan anxiety over the show ending. Ron is after all the most rigid, unchanging character on the series, so if he can find happiness in a new situation, surely the fans can as well.

The remaining subplot involves Tom, who has been strangely absent over the past couple of episodes. Tom is preparing to propose to Lucy, and Leslie motivates him to put together a thoroughly ridiculous proposal video with tons of swagger. Tom initially puts together a ludicrous fight sequence at the jewelry store, complete with stunt double (the store knew the risks, dammit!), but when Lucy returns from a trip, he backs down on the plan.

Fortunately, this wasn’t some cheap, last-ditch effort to have Tom chicken out, as he instead comes to realize that Lucy’s proposal should be how she wants it to be. Thus, Tom puts together something more mature and traditonal, providing a beautiful indication of how much he’s grown up since the series started. The show didn’t place Tom on a hunt for love as aggressively as it initially seemed to, seeming to settle for Lucy simply because she was the best option, but that’s fair enough. At least Tom found happiness as much as everyone else in the end. 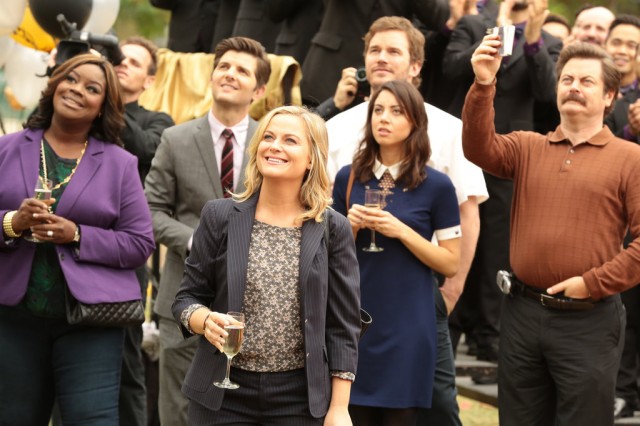 “Two Funerals” sometimes felt like it had a rather hurried pacing, but it still continued to provide more satisfying closure for the many personalities we’ve come to love in Pawnee. The showrunners have helped ease fans into the finale with great love and care, and “Two Funerals” presented a last traditional romp through Pawnee’s zaniness before the series finale. There’s no topping that Bill Murray gag though!

Parks and Recreation 7.11: "Two Funerals" Review
Parks and Recreation's penultimate episode sometimes felt like it was trying to rush a bunch of resolution arcs into a half-hour space, but still carried with it more satisfying closure for Pawnee's supporting denizens.
THE GOOD STUFF
THE NOT-SO-GOOD STUFF
2015-02-27
85%Overall Score
Reader Rating: (0 Votes)
0%