NOTE: This episode aired last week, though our regular television reviewer was indisposed at the time of airing

Arrow delivered an interesting idea with “The Return”, inverting its conventional settings between the present day and the flashbacks. In this case, the present day events of the show unfolded on Lian Yu, while the flashbacks took place in Starling City, during the mission that Amanda Waller enlists Oliver and Maseo on to retrieve the deadly Omega bio-weapon from China White.

More interesting than that however is the fact that this episode features Manu Bennett reprising his role as Season Two’s big bad, Slade Wilson/Deathstroke. Deathstroke is arguably the show’s best villain to date, even now (though Malcolm Merlyn is in a close second), and it’s great cause for celebration to see him back menacing Oliver again, especially since Thea is now along for the ride as well.

Unfortunately though, the episode doesn’t really do that much with him. Yes, he’s loose on Lian Yu, and hunting Oliver and Thea to the death, after Merlyn decides to free him from his confinement as a twisted test for The Arrow and his sister. Nonetheless, Deathstroke spends most of the episode in the background, even though Bennett’s gravelly delivery still remains as chilling as ever. There are some fight scenes with him, incorporating both Oliver and Thea, with the best of these being a two-versus-one fight scene against Deathstroke, but there just isn’t enough of him overall, and that’s kind of a shame.

Much of the episode involved dialogue scenes with Oliver and Thea, now that Thea is immersed in one of the remaining parts of Oliver’s secret; The island. Thea has also discovered a newfound hatred for Merlyn, after Oliver confesses to her that she was the one who killed Sara, under the influence of Merlyn’s suggestion drugs. It was a big moment, and one that Willa Holland delivered very well, even if it came at a time when the two had to stay on their toes with Deathstroke. By the end of the episode however, Deathstroke is re-captured, and Thea is left to tell Merlyn that she will be his soldier, but will never again be his daughter. Ouch.

The island definitely took a backseat to the flashbacks in this case though, with Oliver’s secret return to Starling City in 2010 being explored, a couple of years before he publicly returns, and begins his vigilante career. Sneaking off from Maseo’s watchful eye, Oliver gets hidden glimpses into things like Thea’s drug habit at the time, and how Laurel must tend to a much drunker and more tragic Captain Lance, back when he was first trying to come to grips with losing Sara. Even Tommy got to show up again, throwing a party that Thea crashes, complete with her drug dealer in tow.

Oliver follows Thea to the party, and has one of his first dramatic kills as he ends up snapping the drug dealer’s spine and dropping him off of a stairway. Naturally, Oliver manages to slip away, also provoking the wrath of Amanda Waller in turn. Ironically, Diggle and his brother were keeping watch at the same party, and there’s even a passing cameo by Felicity as Oliver and Maseo have to steal data from Queen Consolidated, with Felicity cutely talking to Oliver’s portrait, and naturally believing he’s dead.

The cameos of present day characters sometimes felt a bit forced, but it was nice that David Ramsey and Emily Bett Rickards weren’t simply left to sit out an episode that was meant to focus on Lian Yu outside of the flashbacks. All in all though, the bond between Oliver and Thea was the prime focus here, even though the flashbacks seemed to outweigh the present day content. We’re getting much further along into Oliver being the vigilante he’ll one day become in the flashback sequences, though he’s still a bit green and self-centered. He’s getting there though, slowly but surely. 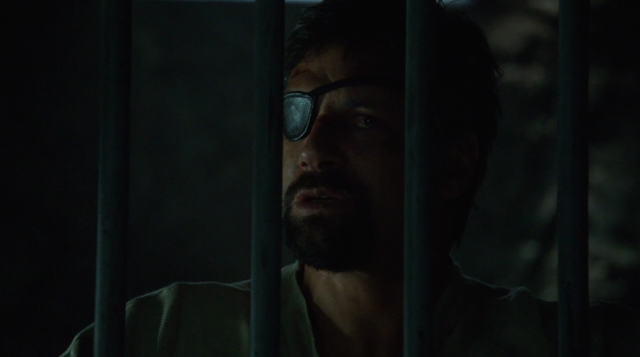 All in all however, “The Return” wasn’t as showstopping or complex as you’d think. It was more of a neat novelty that provided a bit of a break from the many other dramatic arcs that Season Three of Arrow is currently juggling. Still, it was a solid episode that nicely up-ended the show’s typical formula, though it definitely could have used more Deathstroke.

Arrow 3.14: "The Return" Review
Slade Wilson's comeback was pretty short-lived, but "The Return" still did a solid job of reversing the show's typical formula, having the flashbacks in Starling City and the present day events on Lian Yu.
THE GOOD STUFF
THE NOT-SO-GOOD STUFF
2015-02-28
77%Overall Score
Reader Rating: (0 Votes)
0%