Every so often, it’s nice to have a breather from the ever-present danger of Walker hordes and opportunistic survivors. “Remember” provided that welcome reprieve for The Walking Dead this week, taking our survivors into a new haven that threatens to give them peace and tranquility within the zombie apocalypse.

Yes, I say, “Threaten”, because it seems like some of the survivors adjust to the idea of a quiet life more than others. Rick and Michonne suffer sleepless nights, despite Michonne’s desire to find peace in the new community, Daryl appears to reject the idea entirely, and Carol even outright lies about her former life when interviewed by the leader of Alexandria, Deanna Monroe. Yes, if you’ve read the comics, Alexandria should be familiar, but Deanna Monroe was Douglas Monroe in that case. Seems we have yet another instance of comic book adaptation gender-swapping, but that’s fair enough.

Season Five of The Walking Dead has felt a bit sloppy and confused in its earlier points in 2014 especially, but it’s nonetheless achieved a question of just how these hardened survivors are meant to adjust to a peaceful existence. There was some of this behind the portrayal of Woodbury in Season Three, but Alexandria seems to go into a lot more detail with it. Deanna is clearly not another Governor, and it really does seem like Alexandria could be the final stop for Rick’s group. Everyone finds jobs, there’s no shortage of friends, and yet again, it really seems like Aaron was telling the truth about his community.

Considering that The Walking Dead remains the top-rated drama on television though, on AMC or otherwise, and was renewed for Season Six before Season Five even properly started, it’s easy to assume that this is yet another shelter that just won’t last. At the very least though, it got the group out of Georgia finally, even if they still haven’t quite made it to Washington, and are currently mired in Virginia. Perhaps this is yet another way to groom fans to accept the new location of the upcoming companion series, but even if the landscape is outwardly the same, the change in settings helps to give a sense of progression for the show.

Speaking of progression, the aggressively bleak episodes of the past several weeks gave way to something that you don’t often see on this show; Comedy! There were several amusing moments to be had as the group attempted to adjust to Alexandria, between the group having to turn in their myriad guns (including an especially big assault rifle that Carol was carrying!), Carl being overwhelmed by the many options for activities amongst kids his own age (even video games!), and Rick even de-bearding, and getting to be shirtless for attractive local stylist and launderer, Jessie. Jessie’s married, but like that’s going to matter in the long-term.

In fact, ironically, the only thing that seemed out of place this episode were the Walkers, which might as well have not appeared at all. There’s some scenes of Carl and Rick killing Walkers together, worried about their comfortable new surroundings making them weak, and Glenn, Tara and Noah go on a supply run that just provokes their leader into starting a fight, but none of it really felt like it went anywhere beyond eating up runtime. There is one satisfying moment of Glenn finally punching the leader out soon afterward, and Deanna thanking him for putting the guy on his ass, which also leads to Rick and Michonne being appointed as the local cops, but that’s about all that comes of it. It was basically just a roundabout way to get Rick and Michonne entrenched in the community in a more official way.

It’s great when The Walking Dead remembers to lighten up a bit, and present an episode with a greater sense of peace and intrigue, even if it seems inevitable that it won’t last forever, as long as new seasons are demanded. Still, episodes like “Them” really demonstrate how the show can become quite repetitive when it only portrays the same old wilderness slogging and Walker chases. You have to mix it up every so often. Why make this a television show and not a movie otherwise? 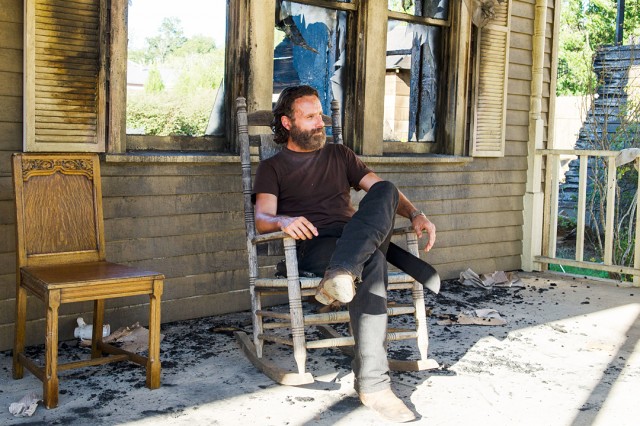 So, “Remember” provided a great breath of fresh air, being intriguing and generally satisfying to watch. It would seem that Alexandria will be the setting for at least the remainder of this season, but that’s fine. It’s a place that audiences can settle into as much as Rick and co.

The Walking Dead Episode 5.12: "Remember" Review
The Walking Dead took a much-needed breather in a familiar haven from the comics with "Remember", a pleasant episode that nicely mixed up the aggressively bleak events from the past several weeks.
THE GOOD STUFF
THE NOT-SO-GOOD STUFF
2015-03-02
87%Overall Score
Reader Rating: (0 Votes)
0%