NOTE: Spoilers from throughout the first season of Constantine are present in this review

Of all the shows that DC tried to launch on television this season, Constantine was the one that had the bumpiest ride. Already well beneath the recognition of Batman and The Flash in the public consciousness, John Constantine’s journey to the small screen was made all the more trying by cast shifts, re-writes, and other such production hiccups. Even now, the show is not confirmed for a renewal at this time, though its devout following of fans has been pleading with NBC for one, with the show even getting its own hashtag, #SaveConstantine.

While the production issues of the shortened 13-episode first season do sometimes get in the way of what could have been, Constantine is still one of the better shows that launched during this somewhat weak 2014/2015 TV season, one which DC almost carried entirely by themselves with their fellow additions of Gotham and The Flash, beyond some exceptions like How To Get Away With Murder. The show is definitely a huge improvement over the maligned 2005 Constantine movie starring Keanu Reeves, and feels much more true to the source comics, while still presenting a fun and interesting occult romp that provides some more much-needed diversity to NBC’s current TV lineup.

First, the big strengths of the show, which begin with Welsh leading man, Matt Ryan. While not a true Brit, as Constantine is in the comics, Ryan feels like he was born for this role. He’s far and away the best portrayal of John Constantine to date (pretty much humiliating Keanu Reeves’ unfaithful portrayal in the process), being snarky, arrogant and almost downright sociopathic in his ways, even content to sneer at angels and God himself, but there’s also something undeniably tragic about his character. Ryan’s Constantine must consistently see his friends and lovers fall, die and become otherwise tainted by his very presence. Despite that, it was one of his lovers that turned him to the world of the occult in the first place, as revealed in the two-part “The Saint of Last Resorts” episodes.

Ryan is a huge part of why the show works, sometimes at the expense of the supporting cast. Charles Halford makes for a solid sidekick in the seemingly unkillable Chas, who had a great plot with evil DC sorcerer, Felix Faust in “Quid Pro Quo”, but it’s too bad that his appearances in the show seem to be a bit spotty. Likewise, while she’s definitely an improvement over Lucy Griffiths’ weak, uninteresting original female lead, Liv from the pilot, Angelica Celaya’s Zed still feels like most of her story wasn’t told in the first season. Perhaps the showrunners were banking on an expanded 22-episode order for Season One, but Zed is a character who has the most unanswered questions, and the least tapped potential, especially given some of her great developments later in the season. 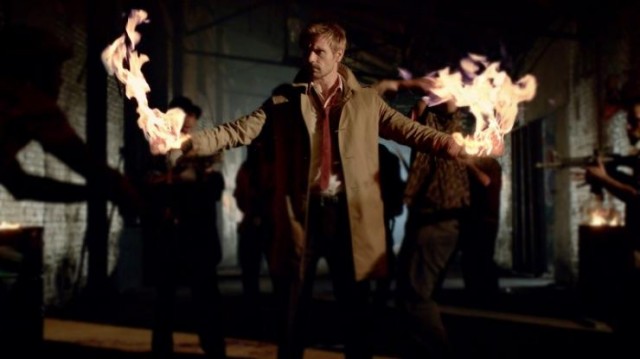 Speaking of untapped potential, Constantine’s cheeky guardian angel, Manny, played by Harold Perrineau, has the worst of it. Manny is a highly intriguing character, even if he seemed to go back and forth on Heaven’s edict of angels being unable to interfere in the affairs of humans. Still, by the end of the season, it became clear why that is, as Manny is actually the mastermind behind the Brujeria, the dark warlocks apparently responsible for the ‘Rising Darkness’ that is blamed for just about all of the show’s big conflicts so far. The season finale ends with this revelation, which feels shocking, but also very frustrating. We’d better hope that we get a Season Two, or else this bombshell officially goes nowhere, and that would really sting for both fans of the show, and of the source Hellblazer comics.

As for the quality of the episodes, most of them were at least good, with the odd and out-of-place “A Whole World Out There” feeling like the only duffer in the bunch. The production issues led to some problems with syndication, namely with “Rage of Caliban” airing out-of-order (it was meant to be the second episode, and instead became the sixth for some reason, causing some narrative confusion), but thankfully, the stories themselves were pretty good. “The Saint of Last Resorts”, “A Feast of Friends”, “Blessed are the Damned”, “Waiting for the Man” and “Danse Vaudou” felt like especially awesome highlights, providing effective mysteries along with some strong thrills, and plenty of cool dramatic reveals to ice the cake, along with Constantine’s reliable wit throughout.

Unlike Gotham and The Flash, Constantine wasn’t as aggressive with linking itself to wider DC lore either, which is ironic, since the show does make an effort to be faithful to source stories from the comics, including “Newcastle”, “The Man” and more. Still, some solid DC connections were made, such as featuring Felix Faust, incorporating DC artifacts like the Black Diamond into certain episodes, and even featuring a cool cameo in the pilot of the Helm of Nabu, worn by DC superhero, Doctor Fate. By far the best connection to the wider DC Universe however came from the guest role of Jim Corrigan, played by Emmett J. Scanlan, who becomes undead DC avenger, The Spectre. This change was foreshadowed by Zed, who saw visions of Corrigan being dead during his two appearances in Season One, but sadly, Corrigan was still breathing by the conclusion of the season. Again, maybe the showrunners were hoping for an extended episode order to better flesh out his story.

As for dedicated Hellblazer villains, we got a couple of those too. Chief among Constantine’s rogues was Papa Midnite, a frenemy to Constantine that always provided great guest appearances in episodes like “Danse Vaudou” and “The Devil’s Vinyl”, and true to the comics, he ranged between shaky ally and deadly foe to great effect. We also got a few other one-off appearances from villains like Mnemoth, a hunger demon from “A Feast of Friends”, but the show mostly just made up its own villains, based on various cultural mythology from around human history. While he wasn’t seen, we also got a mention of who is arguably Constantine’s arch-nemesis, The First of the Fallen, a.k.a. The Devil himself. It’s probably another element that the showrunners are hoping to expand upon more in a future season.

Being on NBC, the show wasn’t as squeamish or adult in nature as the source comics in its first season, and it could feasibly be enjoyed by teens at youngest, but even then, Constantine feels like a genre offering that is both enjoyable and memorable overall. It also provides a welcome contrast to the growing saturation of primetime superhero shows that DC is pushing in the network television space, with a bunch more now being planned for the 2015/2016 TV season. It may be self-contained, but its unique paranormal focus means that Constantine doesn’t require any kind of shared DC Universe to thrive. It stands on its own merits, and its first season only got better with each new episode, “A Whole World Out There” notwithstanding.

All in all, the first season of Constantine seems expressly meant for fans of paranormal media, the source comics, and/or occult-friendly geeks in general, not having the wide, audience-inviting appeal of Gotham or The Flash. Even with more select appeal however, it’s a great show that has an audience, and deserves to go on. It’s an adaptation of Hellblazer done right this time, most importantly, but even if you’ve never picked up a Hellblazer comic in your life, Constantine still makes for a spirited and interesting romp through the world of sorcery, demonology and faith, seen through the eyes of a delightfully sarcastic cynic who is probably in over his head. Even with some of its production snafus, it’s fun to watch, and presents tons of potential for future seasons.

So, yes, this one deserves a renewal!