After sitting out last week, a big event took place on Brooklyn Nine-Nine, with the episode title saying it all. After much teasing throughout Season Two, Boyle’s father and Gina’s mother are finally tying the knot, with the entirety of the episode centering on the big event. It doesn’t disappoint either, as laughs are had with all of the lead characters, resulting in another very strong episode that makes good on every character arc that it presents.

Naturally, Gina is obsessed with worry over the proceedings, and seeing her trying to aggressively coach the various personalities around her as everything goes wrong was a nice moment of comedic vulnerability for her character. Granted, the cliche of everything going wrong at a big wedding wasn’t something that Brooklyn Nine-Nine made any effort to shy away from, sometimes to a fault, but at least the jokes still felt nicely served by Gina struggling to keep it together as every outlandish issue imaginable occurred. 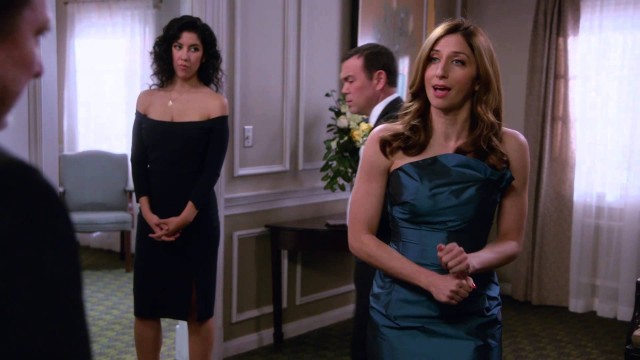 Even before the wedding properly begins, Peralta and Santiago are given a chance to get into trouble when Santiago spots an especially notorious counterfeiter that she has been trying to catch for a long while. Peralta and Santiago’s teamwork manage to get the guy arrested, but in the process, Peralta loses the ring he was supposed to hang on to for the wedding, forcing the two to dig through the garbage for it again. When they eventually find it, the ring ends up getting caught on Peralta’s finger, go figure.

Another arc unfolds with Peralta as well, as Jenny Gildenhorn, the girl who spurned him during that previously mentioned bar mitzvah, is a guest at the wedding. Peralta has apparently been cyber-stalking Jenny since the event, and the admission that it’s mostly what he does at the precinct was pretty amusing, deciding that now is his second chance to get back with Jenny. 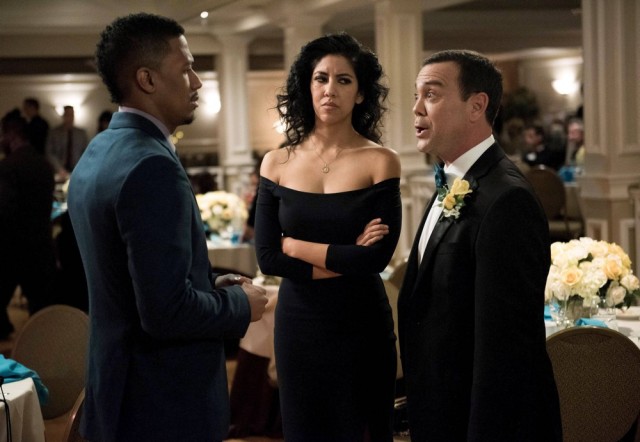 Of course, it’s not meant to be, as Jenny yet again finds another guy and slow dances without Peralta. This does result in a sweet moment with Santiago however, with Santiago being surprisingly supportive of Peralta’s insane mission, including revealing to him that she plays the French horn. It even appears that Santiago might give Peralta the slow dance instead, but hilariously sics Gina’s great aunt on Peralta instead. Still, with that longing gaze, it’s not difficult to see that Santiago’s feelings for Peralta may be re-surfacing. Well, as long as it doesn’t start dragging down the series again.

Meanwhile, Diaz decides not to invite Marcus to the wedding, yet is forced to try and talk Boyle’s father through some pretty bad cold feet. Even Boyle himself can’t seem to cure his father’s anxiety, and it’s Gina who surprisingly saves the day with a strangely heartfelt speech about the Boyle risks being why the wedding is happening in the first place. Well, that, and Boyle and Gina’s sex, which Boyle mistakenly announces to the entire ceremony when he doesn’t realize the mic is on. Well, they had to learn somehow. 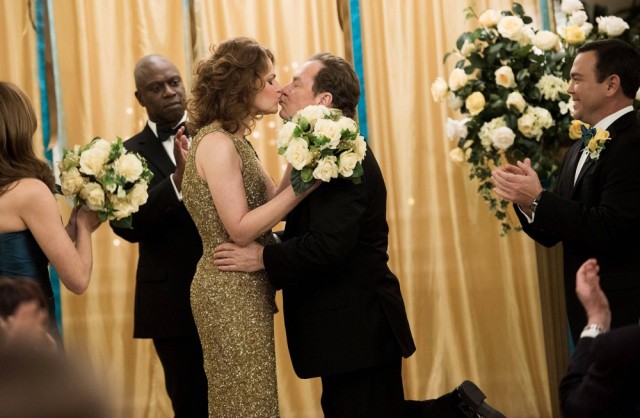 This episode also delivered a big moment for Diaz after these events, when she’s inspired by the Boyle men, invites Marcus to the wedding in the end, and confesses that she loves him. Marcus says he loves her too, and they have a very sweet moment of emotional gratification, which Boyle almost ruins, to funny effect.

As for Holt and Jeffords, the two both individually struggle to write a speech for the wedding, with Jeffords continually breaking down, and Holt eventually taking over, yet suffering writers’ block. Fortunately, by the time the wedding unfolds, Holt has combined his dry wit with a surprisingly emotional speech, and all is well. It was also funny to see a glimpse at Holt’s own wedding, particularly with the subtle hint that he and Kevin might wish to renew their vows at some point, creating another promising episode for this show down the road.

“Boyle-Linetti Wedding” was a very emotional episode, but also a very funny one, which fully realized its incredible potential. It would have been very easy to just have Boyle and Gina’s parents tie the knot off-screen, but it’s great to see Brooklyn Nine-Nine actually make good on all of its buildup with this wedding, and deliver plenty of promising results for the rest of the precinct in turn. It’s not only a new chapter for Boyle and Gina’s parents, but also for the familiar personalities that we enjoy every week, with Diaz finding love, Holt ready to rediscover his own commitment to his husband, and, for better or worse, the Peralta/Santiago affair appearing to surface again.

Still, you can feel the romance, can’t you?