UPDATE: Konami has confirmed that the leaked date is accurate, as the countdown clock was supposed to expire today, though they have clarified that it only applies to the console versions. The PC version has been delayed by a couple of weeks, for reasons that Konami wouldn’t clarify, and will arrive on Steam on September 15th. Hideo Kojima has also spoken a bit about the game, claiming that it is the final game in his Metal Gear Solid saga, and that Snake may not actually say much, despite the high billing of Kiefer Sutherland voicing the character.

The long-awaited stealth-action sequel, Metal Gear Solid V: The Phantom Pain was said to be coming this year, and we were supposed to hear the announcement of the date by tomorrow, according to a countdown clock on the game’s website. Turns out however that Konami and Kojima Productions have let the date slip early, thanks to a new trailer that presumably went live before it was supposed to. Metal Gear Solid V: The Phantom Pain will launch worldwide on September 1st, 2015.

The next chapter in the saga of anti-hero and future antagonist, Big Boss, Metal Gear Solid V: The Phantom Pain takes place in 1984, approaching the climax of the Big Boss prequel story. Now re-envisioned as ‘Punished Snake’, the game’s plot is being mostly kept a secret, naturally, though it involves Snake and his ‘Soldiers without Borders’ facing the weight of the true horrors that they’ve had to commit in their never-ending quest to find their purpose in battle.

Unlike prior Metal Gear Solid games, Metal Gear Solid V: The Phantom Pain is said to take place in a fully open-world environment, complete with a day/night cycle. Players can build and develop a base, assign supporting soldiers to join them in battle, recruit new allies on missions, and even call for extractions, all without interruptions or load times. The game will also include a new Metal Gear Online multiplayer mode, which was first teased at the end of The Video Game Awards last year. 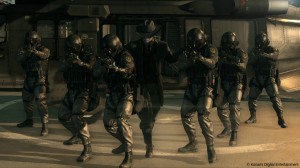 Currently, you can sample the play mechanics in ‘paid demo’ offering, Metal Gear Solid V: Ground Zeroes, and any save data from that game can be carried into a future copy of Metal Gear Solid V: The Phantom Pain on the same platform, carrying over play bonuses and recruited soldiers. You can also get your first look at Hollywood actor, Kiefer Sutherland inheriting the role of Snake from former voiceover actor, David Hayter.

Keep sneaking to Eggplante for all news and updates on Metal Gear Solid.