Brooklyn Nine-Nine has done remarkably well over the past several weeks, but it hit another speed bump with “Captain Peralta” unfortunately. It’s a shame, since the episode delivered a pretty big moment with the introduction of Peralta’s airline pilot father, played in a guest role by Bradley Whitford, but the laughs just felt too mild and spread out to get excited about anything, particularly after the comedic highlight of Gina’s and Boyle’s parents finally tying the knot last week.

The main plot of the episode involves Captain Peralta apparently getting framed for smuggling prescription drugs into Canada. This could cost him his pilots’ license, so Peralta, eager to make up for the fact that his dad left him at a young age, leaps onto the case in an effort to clear his father’s name, dragging Boyle along, as well as Scully, who apparently speaks French, which the Quebec authorities exclusively speak for some reason. Being Canadian myself, I’m pretty sure that most any Quebec authorities actually speak both English and French, since that’s a requirement to work any kind of government or law enforcement job in that province, but whatever. This is an American show, so I’ll let that slide. 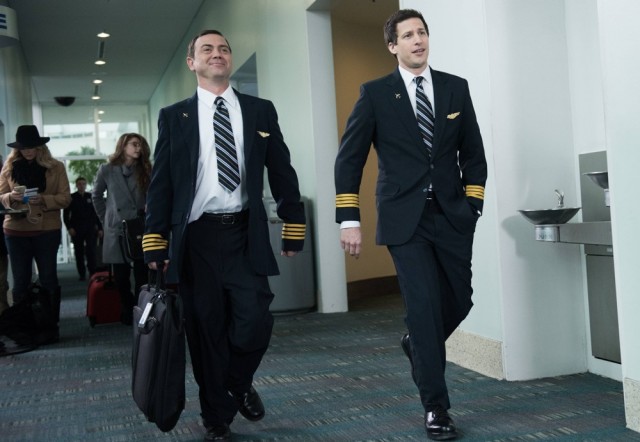 Anyhow, Boyle distrusting Captain Peralta, and Peralta trying at every turn to kiss up to his father just doesn’t feel that amusing. Scully makes some funny cracks here and there, but it doesn’t change the fact that this story is just far too uninteresting, despite the show’s best efforts. There’s a slight improvement when Peralta and Boyle pose as pilots to try and probe a suspect, a woman that Captain Peralta was sleeping with on the side, but it feels too brief.

Oh, and, surprise, the woman that they suspected is the culprit, and she’s arrested off-screen, just as Captain Peralta is freed off-screen. This resolution felt too easy, and was largely unsatisfying. Likewise, the emotional moment of Peralta confronting his father and telling him not to call again until he stops being a flake wasn’t as satisfying as it should have been either. It felt like a sudden heel-turn, especially after Peralta spent the entire episode trying to earn his father’s approval. Yes, the guy didn’t show up to the farewell party that Peralta threw, but his insane devotion should have been a little more ironclad than it was. Maybe Bradley Whitford couldn’t do more than one episode for now. 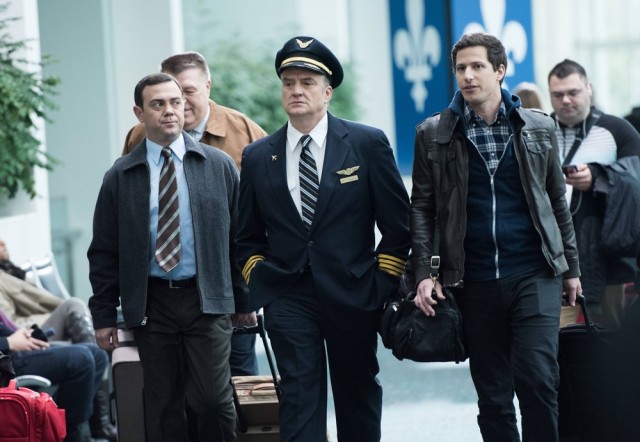 In any case, the subplot fared a bit better, with Holt challenging Santiago, Diaz, Gina and Jeffords to solve a brainteaser, with Beyonce tickets offered as a prize. Gina and Diaz were particular scene-stealers here, and it was great to see a rare pairing of these two in action. Santiago and Jeffords still had some funny material, as did Santiago’s ever-impotent attempts to impress Holt, but Gina and Diaz were the most fun to watch. It was especially funny to see Hitchcock unsuccessfully try to join the two women, with Rosa’s barbed response, “Is this how you want to die, Scully?” being a highlight joke.

Again, the resolution was a bit of a let-down, especially since we didn’t actually hear the answer to the brainteaser in question, as Gina and Diaz deduce that Holt doesn’t know the answer himself, and was hoping that one of the other cops would solve it so that he could impress an old superior that he was soon going to have lunch with, who has been tormenting Holt with that same problem for decades. Gina suggests that Holt tell him to go suck an egg, and Holt gives her the tickets for having the best answer afterward. Again, not the best resolution, but at least it was better than the weak result of the main Peralta plot. 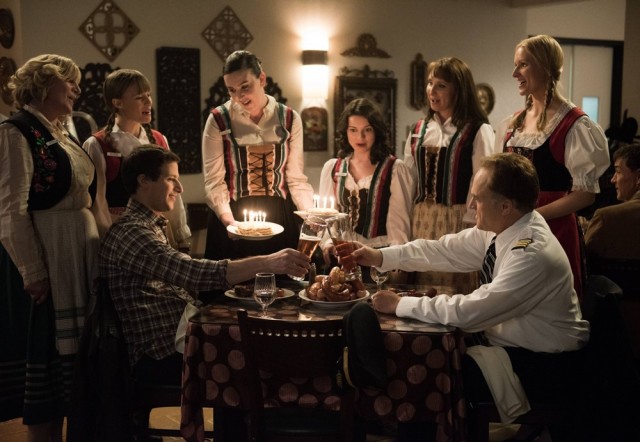 Overall though, “Captain Peralta” was a disappointing episode that stalled the great momentum Season Two of Brooklyn Nine-Nine has been enjoying for the past few episodes. It at least had a decent subplot, but its big introduction of Peralta’s father was pretty disappointing, in terms of both the comedy and the drama. Hopefully this is just a minor setback that won’t be present in next week’s offering.

Brooklyn Nine-Nine 2.18: "Captain Peralta" Review
The introduction of Peralta's absentee father proved to be a disappointment in "Captain Peralta", with only a decent subplot to sustain an episode that largely felt underwhelming for Brooklyn Nine-Nine's recent elevated standard.
THE GOOD STUFF
THE NOT-SO-GOOD STUFF
2015-03-09
68%Overall Score
Reader Rating: (0 Votes)
0%