Better Call Saul has so far given us an outstanding origin story for the man who would one day become Saul Goodman. Another familiar Breaking Bad personality that it’s also featured up to this point however is Mike Ehrmantraut, the stoic accomplice to both Saul and drug kingpin, Gus Fring. “Five-O” is an episode that takes a break from the development of Jimmy McGill, with Bob Odenkirk appearing in only one scene for its entire duration more or less, instead shifting the focus to a tiny peek at the dark and tragic past of Mike, and his own first steps into becoming the man he is during the events of Breaking Bad.

Before I go on however, I must say that “Five-O” is yet another brilliant testament to how excellent this prequel/spin-off combo to Breaking Bad continues to be. While it’s more dramatic than Better Call Saul has been up to this point, “Five-O” still tells an ingenious story that doesn’t say too much, yet just says enough to explain what drives Mike, and what potentially puts him on the radar of both Saul and Gus for the show’s future events, even if we have yet to see the latter man on Better Call Saul.

The episode begins with Mike tending to a bullet wound of unknown origin, as he goes to visit the widow of his late son, Matty in the past. The story appears to imply that his son was a dirty cop, naturally Mike when Matty’s widow has her suspicions, though naturally, it’s not so simple.

In the present, Mike is being interrogated by Philadelphia police officers that have come a long way to bring Mike in for questioning. This is the only point that we see Jimmy for this episode, but it works. As much as Bob Odenkirk has done a brilliant job with Jimmy’s origin, and headlining the show in general, the episode utilizes him just enough to not make him feel shoehorned in to proceedings. Even better is that Mike only hired Jimmy to spill his coffee on one of the cops, so that he could swipe a notebook, revealing that it was Matty’s widow who pointed the Philadelphia police to Mike.

From here, we get insight into Mike’s former alcohol problem, and his own past as a corrupt cop that would have already been apparent to those who have watched through Breaking Bad. Mike explains his side of the story, with the cops believing him to be the killer of two other cops that were present when Matty was killed, and it’s here that everything comes together into a wonderfully brilliant and tragic tale. 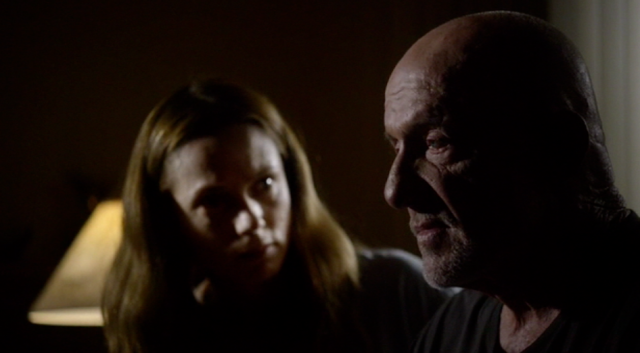 The show flashes back in time, to have Mike drinking at a bar, and stumbling over to the two cops that barely escaped the ambush that claimed Matty’s life. Mike drunkenly tells them that he knew it was them, and proceeds to stumble out. The two cops follow Mike home, with Mike initially refusing to climb into the police car, before being forced to. It’s here that Mike relays his thoughts about the two cops killing Matty for refusing to participate in their corrupt activities, and they take him somewhere to try and kill him discreetly, staging the death as a suicide spurred by Mike’s rampant alcoholism.

Ah, but it was all a trick! Mike reveals that he was never drunk, and then holds the two cops at gunpoint with a weapon he hid in their car after previously breaking in and stashing it there. The cops realize that Mike emptied the bullets out of the gun they took from him initially, and Mike shoots one of them dead, with the other managing to get Mike in the shoulder before he finishes the guy off, thus explaining his mysterious bullet wound at the start of the episode. It was a very cool way to tie the beginning and end points of the episode together, in a manner that made sense, and felt gratifying, despite Mike clearly being guilty of killing the two cops, as the Philadelphia police suspected. 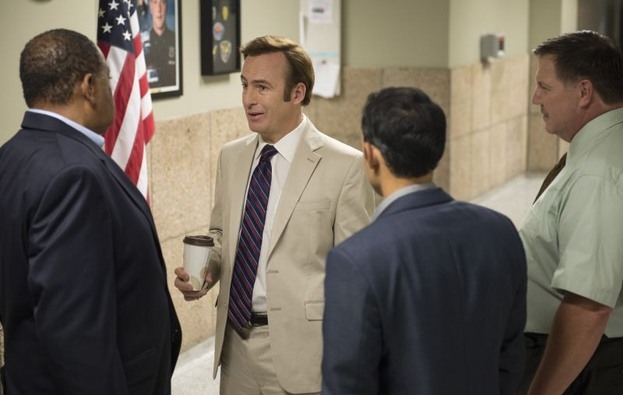 Things got even better when the show returns to the present, with Mike explaining that the reason he was so hell-bent on revenge for his son wasn’t because he was a dirty cop. It was because Matty was a good cop that refused to be corrupt, and it was Mike that talked him into playing along for the safety of himself and his family. Then, the episode goes from sad to heartbreaking, as we see the normally stone-stoic Mike break into tears, saying that Matty was good, and he was corrupted by his father telling him to play along with the bad cops, with Mike being the one person who tainted his good nature before Matty was killed anyway, making it all for nothing. Damn… The episode then ends with Mike asking Matty’s widow that she knows what happened, but can she live with it?

Obviously, we know that Mike isn’t going to be put away forever, and will probably get away with the murders, since he’s a regular presence on Breaking Bad. Still, this was a brilliant episode that took an awesome idea, and made you think that it would play out a certain way, only to push it even further with some fantastically shocking twists. It was awesome to see the episode remember to show, not to tell, yet it still told just enough to make sure Mike did not feel over-exposed, nor diminish his appeal.

“Five-O” is the best episode that Better Call Saul has delivered yet, which is a bit ironic, since it barely featured the future Saul Goodman at all. As Breaking Bad fans would know, this is but one of the sad stories that makes the man of Mike Ehrmantraut, but this one couldn’t possibly have been delivered better!