Road trip comedies made themselves a worthy staple of R-rated, raunchy cinematic adventures with the original Vacation movie in 1983. Since then, movies like Borat, Little Miss Sunshine, Harold and Kumar Go to White Castle, and, naturally, Road Trip have taken up Vacation’s torch to varying degrees, though in recent years, it seems that the idea has largely lain dormant, despite the recent boom of R-rated comedy movies. Due Date seems to have been the only semi-recent release of the post-The Hangover comedy boom for well-intentioned road trips going very, very wrong.

Nonetheless, we have another movie trying to put a new spin on the road trip comedy, that being Canadian filmmaker, Ken Scott’s Unfinished Business. Unfinished Business reunites Scott with his Delivery Man lead, Vince Vaughn, and is at least generally superior to his previous Vince Vaughn vehicle, being more entertaining overall. Unfortunately, Unfinished Business also falls pretty short of its potential, since the movie is mechanically slapdash, and feels somewhat unfinished, or at least unpolished. 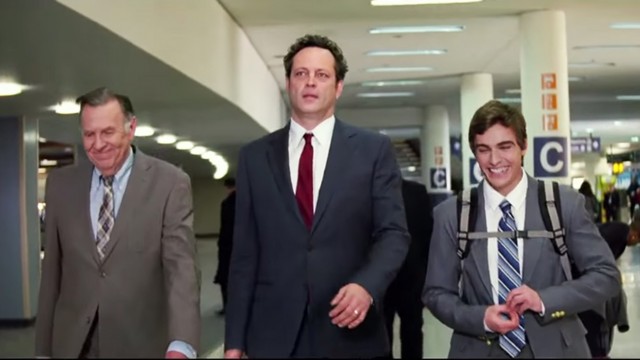 Again, that’s not to say that Unfinished Business is completely unfunny. It has moments of truly entertaining hijinx, and it at least makes an effort to be original amidst the sea of R-rated comedies in recent years. It’s nothing special though, and you’ll likely forget about most of it the second you leave the theatre. This certainly is not the champion that will re-invigorate the adult comedy genre after its recent stumbles.

Unfinished Business stars struggling businessman, Dan Trunkman, who finally has it with his old job and quits, starting his own business selling metal shavings from construction efforts. Surprise, he also has money troubles, and needs to make this one big deal, lest his business go under, and his bullied son be unable to attend private school. Yes, apparently Dan’s wife is pushing for private school, despite Dan’s business clearly being on the brink of bankruptcy. Apparently, she wasn’t tipped off to trouble by their office being in a Dunkin’ Donuts. 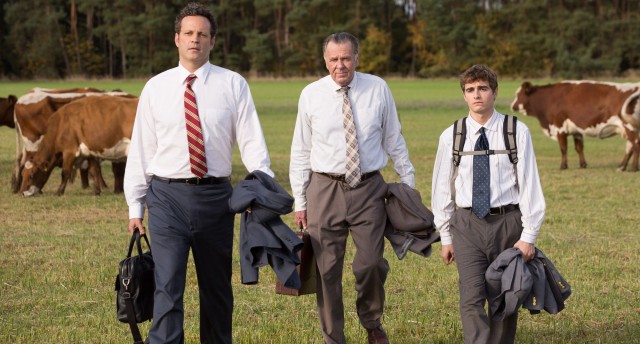 Already, Dan’s motivations are pretty questionable. Unfinished Business makes the woefully misguided decision to try and take on themes of bullying, which it’s clearly not smart enough to handle, It puts Vince Vaughn into an awkward character that has to somehow claim that a smaller classroom will fix his overweight son’s issues with being bullied in school, before giving up in the second half and saying that the kid just needs to have a thick skin and deal with it, because private school won’t fix it. We knew that, but that undeniably feels like the movie realizing it bit off more than it can chew, and subsequently just throwing up its hands and admitting it.

Anyway, Unfinished Business is best when it’s not trying to be smart, and just embraces being a ridiculous, awkward string of gags. Many of them are low-hanging fruits, including a gay fetish club with a glory hole room bit, a steam room with a nudity bit, or a summit with a protest bit, but they have their moments of fun. Vaughn even reasonably sells a semi-decent recurring joke about ending FaceTime calls by pretending to freeze. It gets old eventually, but it’s more tolerable than you’d think, even if any sensible human being could see through it in real life. 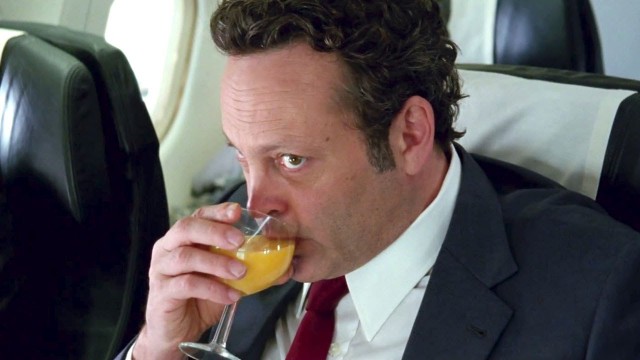 Joining Vaughn for the shenanigans are Tom Wilkinson and Dave Franco, as geriatric, sex-obsessed senior, Tim, and mentally handicapped, but number-savvy young greenhorn, Mike respectively. Tim’s motivation to be able to afford a divorce from his cruel wife is a bit funny, but sadly, most of the other crass, sex-related gags don’t land. Wilkinson does his best, but the script just isn’t strong enough to sustain his jokes to any real degree.

Likewise, the best joke about Franco’s character is that his last name is Pancake, and it distracts clients. Everything else about Mike feels a little too mis-matched to be believable. You could infer that he has some form of severe autism, particularly since he lives in a group home (I have Asperger’s Syndrome myself, so I understand his thinking to a point), but it’s often hard to believe that he’s such a valuable business asset, despite the fact that he can barely string together a paragraph of speech. Franco does what he can, but you can tell that he’s struggling to play the character. Mike is just too much of a plot convenience at the best of times, being naive and adorable to give the crass jokes some charm, and being a deus ex machina whenever it starts to look like Dan and co. deserve to fail due to their lack of business knowledge.

Unfinished Business puts together quite the supporting cast as well, with James Marsden, Nick Frost and Sienna Miller all playing small parts as business allies and rivals. Miller’s character, Chuck, Dan’s former boss who has a man’s name for whatever reason, is meant to be the movie’s antagonist, but then it starts seeming like Marsden’s character, a businessman stringing Dan’s group along to deal with Chuck instead, starts vying for the bad guy role himself. It’s one of the worst instances of the script feeling unrefined and unfinished, since the movie can’t seem to decide who is actually responsible for Dan’s troubles in the end. Neither character is given any kind of defeat, or any real resolution for that matter. 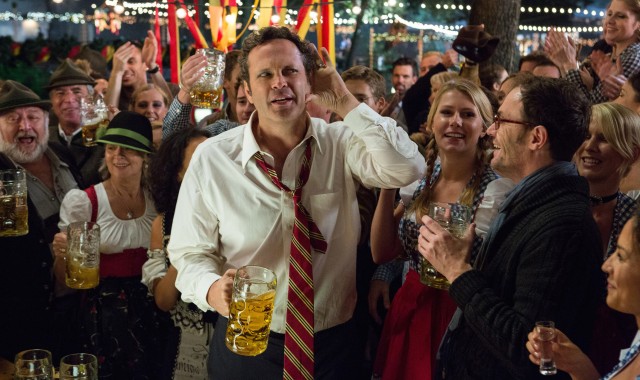 There are good intentions throughout the underdog story layering the movie, with even its apparent villains never portrayed as actively bad people. Unfinished Business is trying so hard to be a feel-good romp with a biting adult edge, much like super-successful modern comedies such as The 40-Year Old Virgin and Ted. It’s that kind of recipe. The problem is that it just needed more time to polish everything up, and made sure that its heart was actually backed up with any semblance of a brain.

Unfinished Business tries to simultaneously be a raunchy road trip comedy and a heartwarming family dramedy about being picked on, but like I said, it should have committed to the former more so than the latter. The story is far too thin to carry any weight as a bullying commentary, with the premise able to easily be summed up as three idiots pursuing a big client to make a deal that will save their business. Hijinx ensue.

The movie largely being set in Germany creates some decent material, however outlandish it may be. If you turn your brain off, you won’t be bothered by most of the jokes and set pieces making precious little sense, and some of them are funny on account of their sheer lunacy, in fairness. It should go without saying that you shouldn’t take Unfinished Business too seriously, and that makes its attempts to be insightful and grounded feel all the more tedious and unwarranted.

There is literally nothing else to say about the plot however. It’s a hodgepodge of ideas that aren’t completely without entertainment value, but really don’t fit together with any kind of flow at the best of times. The movie simply jumps from one set of jokes to the next, whenever it’s not stopping its comedic momentum cold to try and preach about something that it clearly doesn’t have any real answers for. Sure, road trip comedies often benefit from being a string of off-the-wall gags that rely on the element of surprise and non-sequitir, but even then, they don’t just unfold as random chaos. There needs to be a point. Unfinished Business has a point in mind, but it really can’t fit it organically with its gags, which is the largest contributor to the movie feeling sloppy overall.

Director, Ken Scott has the unenviable task of taking a shaky, confused script, and trying to wring a good comedy out of it. He at least manages a slightly better sense of energy and momentum in contrast to Delivery Man, but Scott’s direction feels pretty flat all the same. Only in the party scenes does Unfinished Business feel like it’s not just going through the motions, coming close to actually generating a true feel-good vibe in those places, before these scenes are cut disappointingly short.

It’s a small saving grace, since the emotional moments feel especially sleepy and apathetic, and many of the dialogue scenes just don’t have much punch to them. Unfinished Business is sorely wanting for substance of any kind, be it smart or raunchy, and it feels like Scott’s direction is far too workmanlike in many places. For a movie wishing so badly to be a raucous road trip farce, it really should have remembered to bring the party beyond the scenes that literally unfold at a party.

If it’s not apparent already, Unfinished Business suffers from a serious identity crisis, leaving it completely unsure of what kind of movie it wants to be. It feels like the lone writer, Steve Conrad came up with a theme and story template, then tried to stitch crass, shocking jokes on it that would make the movie appealing to the wave of the post-The Hangover comedy following. The concoction doesn’t feel homogenous though, leaving director, Ken Scott to realize a mis-matched script of two competing ideas that don’t gel.

It takes a lot of skill to make a comedy that’s both biting and raunchy, yet also heartwarming and emotional. Movies like The 40 Year-Old Virgin and Ted, with American Pie, Revenge of the Nerds and Hot Tub Time Machine being some other successful examples, are the exception, not the rule. Unfinished Business shoots for that high standard, but falls incredibly short of it. It bit off far more than it could chew, and simply ends up feeling like a half-baked mess for the most part.

Again, that’s not to say that the movie is completely unfunny, or devoid of good intentions. That’s the tragic thing about it. It might have worked better, had it committed fully to its crazy hijinx and ditched its failed attempt at trying to say something. Instead, the story feels confused, and will likely feel underwhelming to road trip comedy fans, with the rude gags no doubt failing to resonate with those looking for a more heartwarming, classy movie.

Unfinished Business may be worth a home rental for avid enthusiasts of the road trip comedy, but it’s just not good enough to merit a trip to the theatre. It’s at least better than the plodding, redundant Delivery Man, but not by a whole lot.

Unfinished Business Review
Unfinished Business has good intentions and is not wholly unfunny, but its confused script, largely sleepy direction and botched themes make for a slapdash comedy that just fails to mesh into any kind of noteworthy whole.
CHARACTERS60%
PLOT40%
DIRECTION50%
THE GOOD STUFF
THE NOT-SO-GOOD STUFF
2015-03-15
50%Overall Score
Reader Rating: (0 Votes)
0%